Arrow returned from its three-week hiatus this week to revisit the earth-shattering proposal that Ra’s Al Ghul has given to Oliver. Even the title of the episode centers on just one thing, the chance for Oliver to succeed Ra’s Al Ghul as the new leader of the League of Assassins. Ra’s even makes the offer sound pretty appealing, claiming that Oliver could use the League to save the world, not just Starling City, and should he desire that the League not kill anyone, his will be done, as he would be the new Ra’s Al Ghul.

Hell, Oliver would get unnaturally long life to boot, as this episode finally confirms that, yes, Ra’s Al Ghul has extended his life by hundreds of years, using the Lazarus Pits from DC lore, which also heal his injuries. Apparently, as the Lazarus is starting to lose its effect on Ra’s, Ra’s wishes to find a successor. Apparently, Ra’s is not truly immortal, and, while the Lazarus can extend the life of the League’s leader, it can’t extend it forever. It’s a cool balance between Arrow’s increased gritty realism, and the familiar defining element of Ra’s Al Ghul in DC Comics.

This makes for an especially strong episode of Arrow, especially where the drama is concerned. Stephen Amell is allowed to really flex his dramatic talents as Oliver must weigh the result and burden of his crusade as The Arrow, and whether he’s actually done any good for the city at all. The scenes where Oliver takes stock of his mission are some of the most poignant that Season Three has ever offered, with a series of emotional one-on-one dialogues shared between Diggle, Felicity, Thea, Laurel, and Captain Lance. 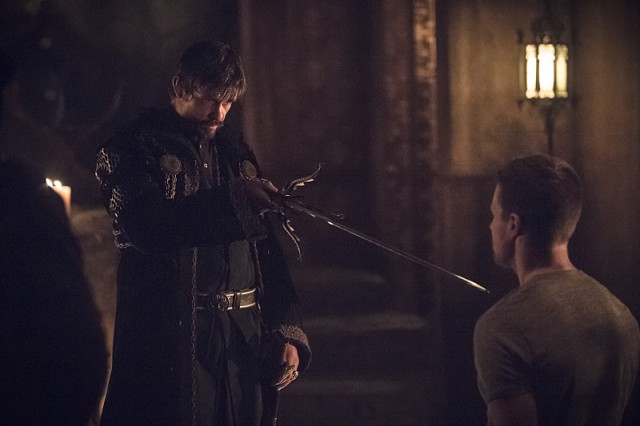 In fact, this week’s villain felt kind of tossed in to the mix at random, even if the sparing use of him effectively avoided intruding on what the episode was really supposed to be about. Our villain-of-the-week was another bit DC Comics baddie, Murmur, a diamond-thieving criminal with his mouth sewn shut. He doesn’t ultimately do a lot of damage, despite getting as far as the Starling City Police precinct, but he does hint at a larger plot for later when it’s revealed that he’s intentionally stealing fake diamonds, to make diamond-tipped bullets.

While Oliver deliberates the offer from Ra’s Al Ghul, Thea must face her anger towards Merlyn, after Oliver initially walks out of Nanda Parbat with Diggle to bring Merlyn back to Starling City. Thea deliberates killing him, but ultimately relents in the end, despite the fact she confesses to Oliver that she pictures killing Merlyn many times in her head. The fact she didn’t was great though, as it proves that Thea is not the cold-blooded killer that Merlyn is, and still has plenty of potential to use her capabilities for good, likely as the future Speedy in subsequent seasons. 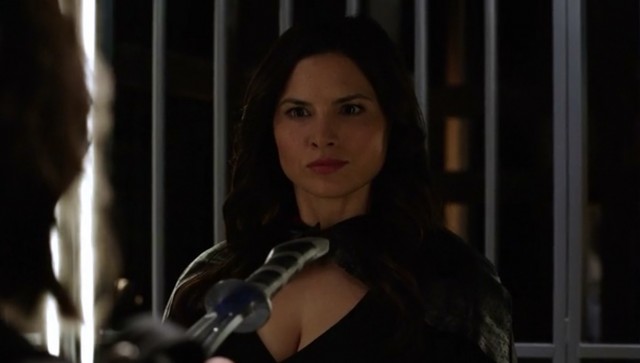 In fact, struggles with fatherhood were a very big theme this episode. Oliver brought up his own late father in reference to why he first took up his mantle as the city vigilante, just as Thea realized her inability to kill her own father, despite his villainy. Laurel also unleashed the wrath of Captain Lance, after he learned of Sara’s death in the previous episode, and even Nyssa found herself exiled from the League, after refusing to accept the fact that Ra’s would appoint Oliver as his successor.

Nyssa was one of the highlight characters this episode in fact, being given the chance to kill Thea at the end of the previous episode, and refusing it, saying that killing Thea wouldn’t be true justice for Sara, as her actions weren’t her own. It was a pretty mature moment for her character, just as a charming ending to the episode came around when she and Laurel decide to have a meal together, following Nyssa assisting with the apprehension of Murmur. A friendship between Nyssa and Laurel was a very unlikely thing, but it feels especially fulfilling for that reason, with both of them coming further along in the healing process, after their mutual loss of Sara.

Regarding Oliver’s decision however, it’s inevitable that he won’t take the offer, deciding that he’s not ready to give up on being The Arrow. He gives his answer to Maseo, who says that Oliver can’t alter the will of Ra’s Al Ghul, and that his apparent choice is only an illusion. Sure enough, the episode ends with Ra’s Al Ghul coming to Starling City in a replica Arrow garb, and killing several criminals, leaving the remaining perp to tell the entire city what The Arrow has done. Oh boy. Looks like Ra’s is about to really put the squeeze on Oliver and his reputation!

Once again, whatever flashbacks played out in this episode weren’t terribly interesting or noteworthy. Oliver simply bumbles about Hong Kong with Akio, eluding what are very likely A.R.G.U.S. pursuers. Nothing much changes here.

That said however, “The Offer” was a fantastic episode that gave a wonderful focus to Oliver’s true accomplishments in Starling City, and whether or not he’s truly made a difference. Given the nature of the show, we knew that the offer was going to be rejected, no doubt provoking Ra’s to be the big season villain by the final few episodes of Season Three, but it was still cool to see that Oliver didn’t outright reject it on a knee-jerk impulse. He actually thought about it. It was actually worth thinking about. The viewers might not have been able to blame him for saying yes, was this to be Arrow’s final season, though since the show has already been renewed for Season Four, that’s not the case.

What can be guaranteed however, is that there will be consequences for Oliver’s convictions.

Arrow 3.16: "The Offer" Review
Arrow returned after its three-week hiatus with a very strong offering, focusing wonderfully on the drama behind Ra's Al Ghul's offer, and whether The Arrow has truly done any good for Starling City.
THE GOOD STUFF
THE NOT-SO-GOOD STUFF
2015-03-19
92%Overall Score
Reader Rating: (1 Vote)
91%