If you’re ever in doubt that there’s an actual recipe for a Liam Neeson action movie, beyond the realm of the Taken trilogy, one need look no further than Spanish director, Jaume Collet-Serra. Having already collaborated with Neeson on Unknown and Non-Stop previously, Collet is bringing his star to another romp of kicking ass and taking names, this time in Run All Night.

While it remains a tried-and-true Liam Neeson-approved action extravaganza, Run All Night also succeeds by virtue of the fact that it’s the best of the unofficial Collet-Serra ‘trilogy’ of Neeson vehicles. It’s perhaps not the smartest, but it’s definitely the most entertaining, capitalizing on its simple premise with plenty of high-stakes thrills, and a sharp supporting cast in the likes of Ed Harris, Joel Kinnaman and Common.

The movie does take a short while to actually get going, but when it does, it doesn’t let up. You do have to be in the market for a no-holds-barred action romp that doesn’t bring much in the way of wisdom or sense to the table, but if you’re just looking for an exciting action-thriller with no extra cheese like a grounded story or sensible threats, Run All Night will prove a satisfying investment.

Liam Neeson’s latest fifty-something bruiser is Jimmy Conlon, a retired hit man that was once known as, “Jimmy the Gravedigger.” Formerly working for his childhood friend, mob boss, Shawn Maguire, the alcoholic and depressed Jimmy has struggled to make ends meet with odd jobs that Shawn’s connections help him find. Jimmy is also estranged from his son, Michael, a retired pro boxer that tries to mentor at-risk kids. Due to his father’s old job, Michael’s own wife and kids have never even met Jimmy.

Of course, the strained father-son relationship between the two is going to have to help them survive one horrible night, after Jimmy saves his son’s life, following Michael witnessing Shawn’s son commit a murder. Jimmy shoots Shawn’s boy right as he’s about to do in Michael, leaving Shawn to turn all of his forces on Jimmy and Michael, from corrupt cops to professional assassins to virtually any thug with a gun and a lust for cash, as Jimmy and Michael desperately try to escape New York throughout the night. 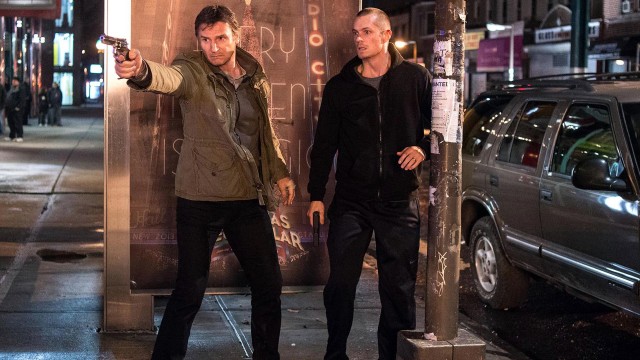 Run All Night plays at depth, but the truth is, it’s barely skin-deep. Jimmy and Michael do have some good character dialogue, namely with passing references to what drove them apart, and the tragic result of Jimmy’s career leaving him without family, and a real support system. Of course, the movie seems to drop the whole drinking and anger problem once Jimmy must try and protect his son from Shawn, but that’s to be expected. As Rambo and John McClane taught us, personal demons are something that can be conveniently put aside when one is required to kick ass in most cases.

Fortunately, Neeson is appealing as ever as the hard and cold Jimmy, with Joel Kinnaman playing the angry, but begrudgingly helpful son that Jimmy is nonetheless proud of, quite well. Ed Harris makes a solid villain as well (though one that oddly doesn’t participate in the climax), gritty, professional, and fatally stubborn. Neeson and Harris are a natural pair to boot, with a great dinner exchange between these two friends-turned-enemies almost rivaling Neeson’s famous phone call scene from Taken.

Again though, as much as the movie tries to feature people like Michael’s confused family, and a good detective that’s eager to put Jimmy behind bars for good, most of the movie is as the title suggests; Staying on the move, and not stopping to smell the roses. The only other supporting actor of note in fact is Common (Nick Nolte does show up as Jimmy’s brother too, but most of his scenes were cut, and he is uncredited), playing a hired killer that shows up in all of two scenes to menace Jimmy and Michael, with a conveniently bottomless gun barrel, and hilariously conspicuous tactics that make him arguably the worst assassin in existence, if we were going by real-world logic, which, we’re not, of course.

Even with its sheer lack of common sense though, Run All Night runs with just enough heart to feel like it’s a worthy emotional investment for action movie fans, without overloading them with needless schmaltz. A true ‘guys’ flick’, Run All Night conveys its drama through posturing and male rhetoric, with everything coming back to a promise of more delightfully entertaining violence. Hey, say no more! We’re sold!

I’ve virtually said all that can be said about the plot of Run All Night already. It’s the wrath of a scorned mobster coming down on his former hired killer, and said killer’s boy, after the mobster’s son takes a bullet under some tragic circumstances. Like I said, a lot of it simply amounts to senseless action and violence, but that is what Neeson fans are going to be paying for. When it comes down to it, a whole lot of people need another Nesson-flavoured ass-whoopin’ (the fact that one scene features Taken-esque Albanian gangsters is almost hilariously on-the-nose as well), so cue film.

There are enough solid twists and turns to carry what’s largely a pretty thin storyline, so at least Run All Night doesn’t feel predictable, even if we no doubt know not to expect much in the way of depth going in. There really isn’t much else to say about the storyline though. It’s as straightforward as you can get, even if it spends the first twenty minutes or so simply spinning its wheels, and revving its engine. When it finally hits the track however, the journey it takes viewers on is both satisfying and familiar, being action movie comfort food for those who have a taste for Liam Neeson’s brand of dropping bad guys.

Collet-Serra’s hyperactive direction swivels and jerks around New York in real-time, giving a rapid pulse and sense of energy that takes some time to charge, but never relents when it’s unleashed. It’s not until the final battle’s conclusion that the movie finally stops its momentum, even if it still remembers to take a break with some perfunctory dialogue moments between Jimmy and Michael, so as to avoid feeling too breathless.

This being his third collaboration with Liam Neeson on an action vehicle, Collet-Serra has built on the foundation he laid with Unknown and Non-Stop. The result is a movie that feels tightly-paced and well-executed, avoiding the sense of being exhausting, despite its premise and title. It may not be a complicated production, but it knows what it is, and focuses on giving Neeson fans, and action movie fans in general, what they want. No pointless drama, no convoluted lore. Just sharp thrills. There’s something to be respected about a helmer that has learned to deliver that in such a reliable way.

Junkie XL composes the soundtrack of Run All Night, which is fitting, since he’s worked on both high-powered blockbusters and video games alike. Run All Night’s soundtrack isn’t altogether complicated, much like the movie itself, focusing on the same hurried, focused beats that continue to complement the kinetic pacing throughout. They also have the good sense to largely quiet themselves when action scenes ramp up, allowing us to focus on the awesome hits and kills throughout the movie. 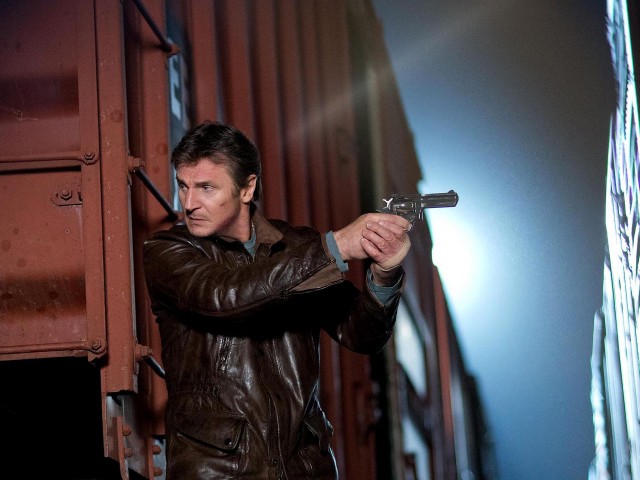 In fact, while it’s an action movie that’s friendly toward older viewers, thanks to the comforting presence of Liam Neeson’s hard-hitting edge, Run All Night also feels like it is borrowing at least a mite of inspiration from video games as well, particularly in its transitions, editing, and modern action game-esque style of simply stringing together a series of set pieces around one singular struggle. The understated, yet punchy soundtrack works well with this setup, reminding audiences that there’s no time to slow down, and that everything must keep moving. Well, since it’s a movie, I suppose we don’t have to worry about hunting for collectibles in this case.

Run All Night is senseless and moderately shallow, and non-fans of action movies could be forgiven for thinking that the whole thing is a bit silly. For those who enjoy Liam Neeson and/or unapologetic action flicks however, Run All Night is a good bit of fun.

For all of its pomp and circumstance, there isn’t much to the story, but that’s probably for the best. Run All Night doesn’t pretend that it’s something it isn’t. It takes itself just seriously enough, without being too serious, and doesn’t let anything get in the way of a whole lot of bad guys getting taken out. In that sense, it’s action movie comfort food, and it’s mighty appetizing if that’s what you’re hungry for. 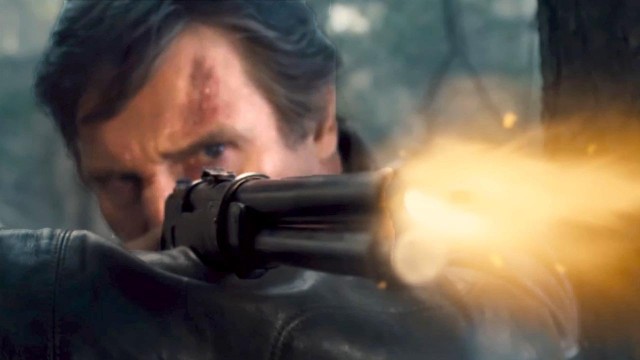 So, the only question is, is Run All Night what you’re hungry for? It may be the movie equivalent of fast food, with its empty calories and general flat-ness not satisfying in the long term, but sometimes sating a unique fix that can’t be provided for in any other manner. Sometimes, you just need to have that greasy concoction of questionable means. So, go ahead, action movie fans, have that burger. Liam Neeson says it’s ok.

Run All Night Review
High on energy and short on sense, Run All Night is solid action movie comfort food for Liam Neeson fans in particular, even if it takes a little bit of wheel-spinning to get to the smorgasbord of ass-kicking.
CHARACTERS70%
PLOT70%
DIRECTION80%
MUSIC & SOUNDTRACK80%
THE GOOD STUFF
THE NOT-SO-GOOD STUFF
2015-03-22
75%Overall Score
Reader Rating: (0 Votes)
0%