After his setback last week, following the conclusion of the Kettleman arc, Jimmy once again found himself on the rise, after he believes that he’s discovered a racket at a bulk of his clients’ retirement community, Sandpiper Crossing. When Jimmy finds evidence that the community may be defrauding its residents, Sandpiper ejects him, trying to accuse him of shaking down the community, motivating Jimmy to go on the attack.

“RICO” also presented a big moment for Jimmy, as he eventually enlists Chuck to join him in his crusade against Sandpiper Crossing. Chuck thankfully comes in after Jimmy is forced to dig through garbage for hastily-shredded paper, which is as humourous as it is disgusting, and after the two manage to piece together a shredded document revealing off-shore expenses, they learn that they may have grounds for a RICO case, which allows them to charge the entire Sandpiper parent corporation as a conspiracy. 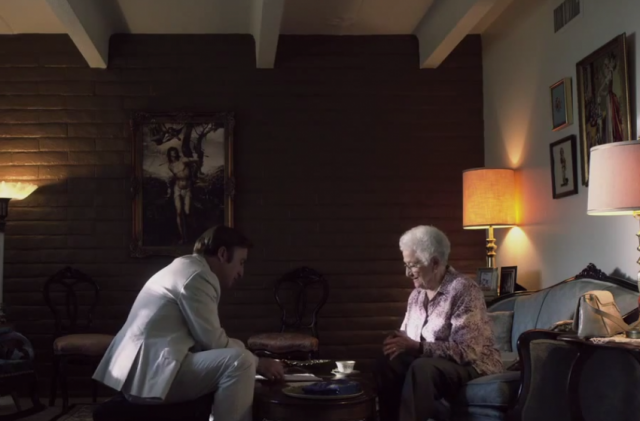 The first half of the episode thankfully shows that Jimmy hasn’t lost his can-do attitude, despite what occurred during the previous episode. The attempts by Sandpiper to repel him only make him all the more determined, particularly since it’s evident that Jimmy has a certain way with the elders. Had he not been destined to become Saul Goodman, his future in elder law would make a whole lot of sense.

In any case, “RICO” being a more optimistic episode for Jimmy meant that there were more laughs overall, which was a nice break from the heavier dose of tragedy that Better Call Saul has been delivering over the past couple of weeks. Bob Odenkirk balances comedy and drama with the best of them, but there’s just something about Jimmy’s/Saul’s character that’s especially compelling when he’s allowed to flex his biting wit. It’s perhaps inevitable that the case against Sandpiper won’t go as planned, since Jimmy would no doubt be a superstar lawyer otherwise, though perhaps it might be even more surprising to see Jimmy actually become an honest lawyer, and then later fall into being a criminal lawyer some other way than just failing out of being a hero.

Despite the intimidation tactics of Sandpiper, Jimmy and Chuck prove to be an unstoppable team once they properly get going, with Sandpiper’s lawyers being called to Chuck’s house to try and work out a settlement for $100,000. Naturally, Jimmy doesn’t take the meager offer, with Chuck eventually chiming in, and saying that the settlement must be at least $20 million, or the McGill brothers will see Sandpiper in court. Turns out Chuck’s still a high-powered rockstar attorney after all!

It looks like we have a trial to look forward to for the end of the season then, as Sandpiper doesn’t appear to be writing any cheques. Chuck even gets so far into the zone against them that he steps outside, fishes Jimmy’s car keys out of the mailbox, and pulls out some files, with Jimmy standing at the door in awe as the two brothers realize what has happened. The episode then ends on this scene. Does this mean that Chuck has conquered his ‘condition’? If so, it looks like Sandpiper is going to be really up a creek!

There were some scenes with Mike Ehrmantraut in the episode as well, namely a seemingly simple babysitting job with Mike’s granddaughter. After the job is over however, Mike learns that, surprise, his son’s widow is having money problems. His brief story arc ends with a visit to the vet, revealed to be a front for some other racket, where Mike asks about more fixer work, to be determined in a later episode.

“RICO” seemed to present bigger, better things for Jimmy than the Kettlemans, even if it seems like the goodness isn’t bound to last. Seeing Jimmy and Chuck team up on a case was very satisfying however (particularly when the episode opens with a flashback peek at why Jimmy hates Hamlin, Hamlin & McGill so much), and the case against Sandpiper will no doubt carry the rest of the first season pretty nicely. Hopefully, that’s the last time Jimmy will have to dig through the garbage to get ahead though!

Better Call Saul 1.8: "RICO" Review
Better Call Saul perked up Jimmy this week with a brighter case against a retirement community racket, leading to a satisfying Jimmy/Chuck team-up, and a promising case for the remainder of the first season.
THE GOOD STUFF
2015-03-24
91%Overall Score
Reader Rating: (0 Votes)
0%