Ward and Agent 33 finally returned to Agents of S.H.I.E.L.D. this week, having found each other from the fallout of Whitehall’s death, and the heavy blow that was dealt to HYDRA before the rise of the Inhumans. This made for a very interesting and subversive episode, humanizing both Ward and Agent 33 in a superb way, as they navigate a romantic relationship, hence the episode’s title.

After last week’s super-villain smorgasbord, Agents of S.H.I.E.L.D. became more grounded in general this week as well. With the alternate S.H.I.E.L.D. exposed, and Bobbi and Mack now having to really cover their tracks with Coulson, the purpose behind the other S.H.I.E.L.D. slowly comes to light. On this note, it was very cool to see one of the background agents from Season One turn out to be one of the other S.H.I.E.L.D.’s bosses, suggesting that S.H.I.E.L.D. is so compartmentalized, that they may have even anticipated the earth-shattering HYDRA takeover from within the organization, during the events of Captain America: The Winter Soldier. 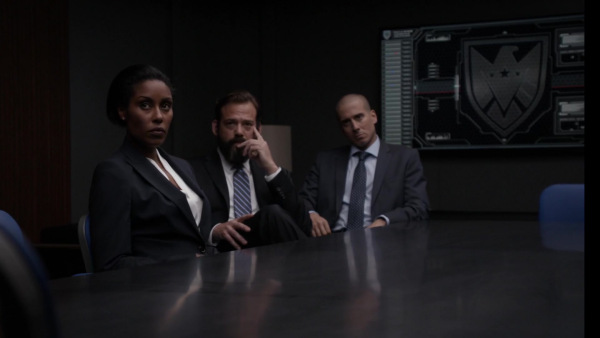 This also creates the possibility for an interesting new antagonist, beyond the background threat of the Inhumans. Apparently, the other S.H.I.E.L.D. is not happy with the old S.H.I.E.L.D.’s ways, namely its secret-keeping espionage. Since Coulson is a relic of the old ways, one that has been deemed to be unfit for duty after the fallout from his death in The Avengers, the new S.H.I.E.L.D. proposes that Coulson must be eliminated, as he is what stands between the rebuilding of S.H.I.E.L.D. Yikes.

This is an interesting new threat, not only because it leaves room to question the real allegiance of Mack and Bobbi, but also because it presents a more grounded and relatable foe for Coulson and his team. As exciting as it was for Agents of S.H.I.E.L.D. to end up being the vector that introduced the Inhumans to the Marvel Cinematic Universe, almost half a decade before the Inhumans movie is scheduled to hit theatres, too much Inhumans would eliminate the grounded, human tone that the series has built itself around. The other S.H.I.E.L.D. will make sure that the larger-than-life Inhuman drama doesn’t take over everything, and that’s great. 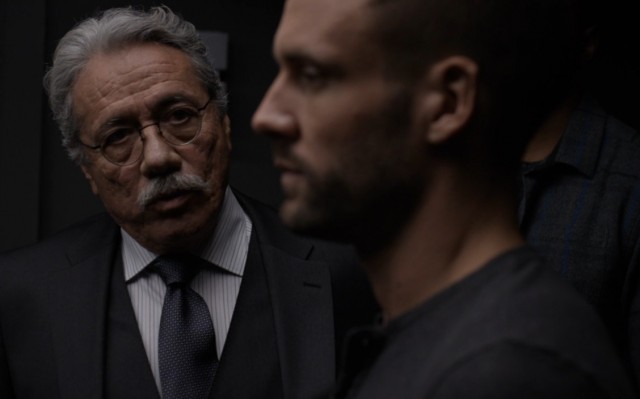 All of this talk meant that the show didn’t contain any real action this episode, as everything was about character development. Hunter sees Bobbi and Mack for what they really are, while Mack must reconcile with lying to the man who took him in, as May, Coulson, Fitz and Simmons must still figure out how best to cope with Skye’s abilities. In fact, the ejection of Skye from their crew, to be hidden away in a remote cabin, is a pretty big deal. It shows that the team still hasn’t ruled out the possibility that Skye may end up being a threat, even if she doesn’t want to be. Again, this also allows the show to take a break from all of the Inhuman story elements, without completely tossing Skye away.

Speaking of Skye, the surprisingly loving relationship between Ward and Agent 33 really pushed forward with the revisiting of Ward’s romantic history with Skye. After Agent 33 can’t get the broken May mask removed, she is instead given the ability to shapeshift her face into whoever she chooses. She decides that shifting into Skye’s face will make Ward more attracted to her, but Ward rebukes the advance, claiming that Agent 33 is not being who she really is. This makes Agent 33 break down, saying that because of her brainwashing and lack of her own face, she doesn’t know who she is anymore. The episode even tries to address the possibility that Agent 33 could just scan a photo of her old face and go back to normal, but apparently, she didn’t keep any old photos. Strange, but if she was a former S.H.I.E.L.D. agent, maybe that’s not surprising.

The climax of the episode involves Ward and Agent 33, exploiting Agent 33’s face-shifting, breaking into Talbot’s office to steal back the captive man who brainwashed Agent 33. Since Agent 33 poses as Talbot’s own wife, Talbot has to interrogate all of his female officers, including pulling on one’s face that is revealed to be innocent. He also holds his own wife at gunpoint when the real wife comes in, and both Agent 33 and Ward naturally get away with the man, completely undetected. D’oh!

As much as the episode attempts levity with the Talbot situation, it felt like another instance of the show botching its humour a little bit. Given that Talbot is such a hard-ass, it seemed out-of-character to have him suddenly turn into such a nincompoop. There were some giggles here and there, but for the most part, trying to make a fool out of Talbot felt unnecessary. Coulson is far better at that.

The episode ends with Agent 33 and Ward brainwashing the man who brainwashed Agent 33 initially, with the same mysterious HYDRA device, saying that they won’t necessarily reward his compliance. Before that however, Agent 33 shifts back to her own scarred face, and Ward says it’s nice to finally meet her. Aww… It’s actually kind of a sweet moment, considering that these two are psychopathic villains. Even the bad guys fall in love, it seems…

“Love in the Time of HYDRA” was a great episode, one that delivered a more intelligent, provocative story in contrast to the more popcorn-y story of last week, even if “One of Us” was equally entertaining, for different reasons. It not only brought Ward and Agent 33 back to the show, but did so with a rather unexpected turn, having them become lost and find each other for a greater purpose, following the death of Whitehall in the midseason finale. Best of all is that, while it nicely balanced out the Inhuman storylines, it didn’t cast them aside either. It’s a fine balance between the human world and the Marvel sensibilities that make it all worth enjoying.

Agents of S.H.I.E.L.D. 2.14: "Love in the Time of HYDRA" Review
"Love in the Time of HYDRA" paints some returning villains in a different light, while an effectively grounded threat emerges against Coulson, bringing Agents of S.H.I.E.L.D. back to its grounded roots, without sacrificing the momentum from the Inhumans.
THE GOOD STUFF
THE NOT-SO-GOOD STUFF
2015-03-26
88%Overall Score
Reader Rating: (0 Votes)
0%