Last week, a milestone was achieved, when Barry managed to speed so powerfully and emotionally that he actually traveled backwards through time. After he tips off Dr. Wells about this event, Wells warns Barry that messing with the space-time continuum can never end well, and he must repeat every action he did the previous day, lest he mess up the past. So, what does Barry do? Immediately exploit his knowledge of Weather Wizard’s hideout, and throw him in the pipeline with the other metahumans. Well, so much for that warning.

This means that Barry and Iris professing their love, Iris learning that Barry is The Flash, and Cisco’s murder at the hands of Dr. Wells, have all been predictably undone. Fortunately, “Rogue Time” nonetheless avoided feeling like a cop-out. Now that Central City is no longer being obliterated by a tsunami, the Rogues were allowed to come out and play again, with yet another new addition to the ranks, and Cisco got his biggest chance to shine yet, particularly with the first look at his family life. 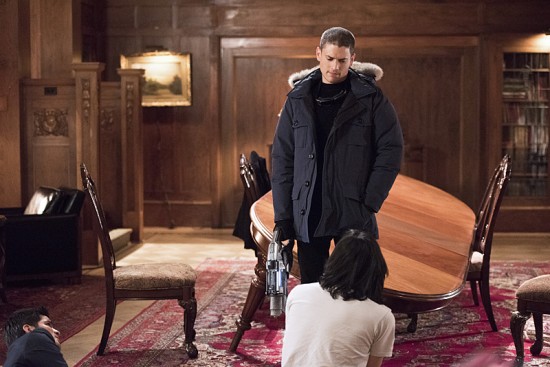 Best of all however is the idea that Barry can’t just rewind time on a whim, nor is rewinding time actually a good idea. Wells’ explanation of time being fragile, and always finding a way to replace a catastrophe, was very chilling, and it was awesome to see the show not treat Barry’s inadvertent time travel as a big reset button. Barry even directly brings up the possibility of going back in time to save his mother, which Wells strongly advises against, making for a wonderful Flashpoint tease for DC fans, as well as proof that Barry would use his time travel abilities to try and prevent that incident, as we established a couple of episodes back.

While Barry and Wells debated time travel, Cisco begrudgingly attends his so-called ‘perfect brother’, Dante’s birthday party, convincing Caitlin to come along as well. Seeing Cisco as the black sheep, and Dante looking down on him and his scientific pursuits was a bit startling, but it helped to explain a lot. Cisco’s proud geekery and goofy sense of humour no doubt stems from his family not taking him seriously, particularly when they seem to sneer at him still working at S.T.A.R. Labs, following the incident with the particle accelerator. The Cisco arc also plays great into the episode’s climax, but I’ll get to that.

Naturally, what many would be looking forward to most this episode is the return of Wentworth Miller’s Captain Cold and Dominic Purcell’s Heat Wave, who were broken out of their prison transport by Cold’s sister at the end of “Revenge of the Rogues” back during the midseason premiere. Cold’s got a plan for a new heist, just in time for Cisco to get lucky at a bar while Barry watches in disbelief. Well, so much for his hard day!

Oops, except Cisco’s day isn’t going to improve. The lady luring him into the house she’s squatting in turns out to be Lisa Snart, Captain Cold’s own sister (played by Smallville’s Peyton List, another DC veteran), who has brought Cisco forth to rebuild the confiscated weapons of Captain Cold and Heat Wave. Cisco’s brother is taken hostage to motivate Cisco to work, and Cisco rebuilds the guns. Yes, apparently Cisco, despite his young age, has impossible Tony Stark-esque abilities to build whatever gadget he wants with a magic array of materials that should cost millions of dollars. It brings the Rogues back to prominence though, so don’t think about it too hard.

Those looking forward to Golden Glider however might be in for an interesting switch. Sure, the magic ice-generating skates might have been a lot to swallow, even for this show, but the fact that Cisco somehow builds her a… gold gun, feels just as ridiculous. How did he build that? Why would he build that? Why would Lisa insist on a gun that’s pretty?! How does that gun even work?! Yes, Golden Glider was bound to be pretty far removed from reality regardless, but ultimately, I don’t think the ‘gold gun’ ended up making any more sense than those skates from the pages of DC Comics.

In any case, after Cold gets his score, and tortures Dante with his Cold Gun looking for the identity of The Flash, Cisco… tells him! Yes, a surprisingly landmark event occurs this week, as Captain Cold learns that The Flash is Barry Allen. This follows a nicely emotional scene of Cisco’s brother confessing his jealousy of Cisco, secretly admiring his brother for his convictions, and because he didn’t follow the family wishes. Aww… Too bad about Dante’s piano-playing fingers though. 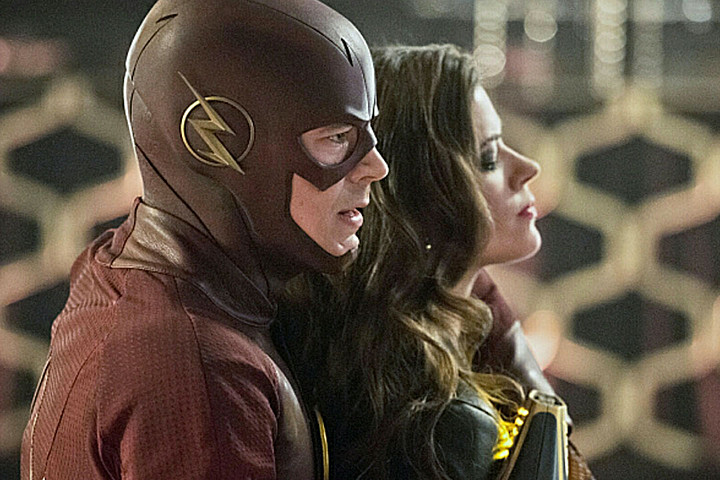 The climax of the episode has Cold, Heat and Glider chasing a truck carrying the casino’s transporting money, and it might disappoint some that there isn’t a fight. Still, we get an equally good scene where Barry whisks off Cold, and tells him, sans mask, to get out of town. Cold refuses, claiming that Central City is his home. Since Barry can’t remove him, and he can’t get around Cold broadcasting his identity to the world if anything happens to him, he decides to soften the situation by telling Cold that if he’s as good as he says he is, he shouldn’t have to kill anyone. Before he speeds off, Cold latches on to one of Barry’s words, and says aloud, “The Rogues… Cute.” Yes, apparently Barry is the one to christen the group, albeit accidentally. Barry ditching Cold in the woods while Heat and Glider claimed the money was pretty funny though, even if it seemed unrealistic that Barry would just let them steal the cash without consequence.

The other story arc this episode involved Iris, with Barry trying to get her to admit her feelings again, and predictably failing, even after a rather quick and clean re-break-up with Linda. Iris becomes impatient toward Barry, and Eddie even punches Barry out at the casino crime scene, telling him to stay away from Iris. Whoa! Later in the episode, Caitlin smooths the situation over by claiming that the lightning strike has been affecting Barry’s emotions, leading to both Iris and Eddie forgiving him. Eddie’s violent heel-turn sure is startling though! Eddie’s been nowhere over the past several episodes, and now he’s suddenly shown up with a bad attitude? I hope the show can explain this… 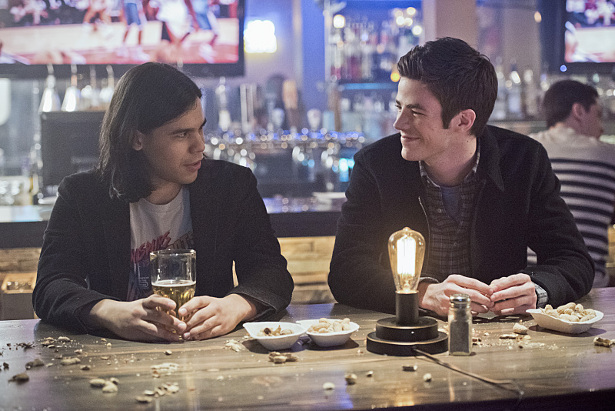 In any case, as with the prior Rogue-focused episodes, “Rogue Time” was a lot of fun, and felt very smartly-executed. The explanation for the first rule of the Rogues, where they are forbidden to kill, is quite clever, as was how the episode directly addressed the dire consequences of Barry’s time traveling. Ultimately, he made a better scenario than the whole tidal wave issue in the end, but there’s still time for his actions to have bigger consequences later in the season, particularly when Barry ends the episode by telling Detective West that he may have been right about Dr. Wells, after Iris’ editor, who was nosing into Simon Stagg’s death, is killed by Reverse Flash. Frankly, Wells being a murderer is the least of their problems…

The Flash 1.16: "Rogue Time" Review
The Rogues delivered their ever-reliable entertainment with their return this week, in a smart episode that directly addressed the issues with time travel, and gave us a cool peek into Cisco's home life.
THE GOOD STUFF
THE NOT-SO-GOOD STUFF
2015-03-26
88%Overall Score
Reader Rating: (0 Votes)
0%