Microsoft has revealed the free game selections that will be offered to Xbox Live Gold members this April. As promised, the Games with Gold catalogue for the month will be twice as big as well, in celebration of over 100 million downloads of Games with Gold rewards. This means that Xbox One owners can anticipate two free games next month, while Xbox 360 owners will receive a whopping four free games, with two each being offered during April’s two halves.

The new game rewards will begin going live next Wednesday, April 1st. Thus, if you have yet to redeem Rayman Legends on Xbox One, and/or BioShock Infinite on Xbox 360, you have until then to do so. Afterward, both games will return to their original prices.

For the entire month of April, Xbox One owners with an Xbox Live Gold membership will be able to redeem Pool Nation FX to start. This all-new indie billiards game release will come to the Xbox One Games Store for the first time on April 1st, via the ID@Xbox program, and functions as a refined upgrade of Pool Nation. The game promises greater rule customization, the ability to spectate active matches, tournament setup, and naturally, improved graphics and physics. Pool Nation FX will also release for PC and PlayStation 4. 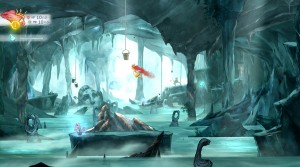 The second free Xbox One reward throughout all of April will be Child of Light. This amazing classic-style console RPG puts players in control of Aurora, a princess whisked off to the faraway land of Lemuria, where the visuals unfold as living poetry, and all characters speak in rhyme. Boasting free-flying exploration and a dedicated turn-based battle system, along with stunning production values, Child of Light was deemed one of Ubisoft’s best offerings overall last year. We reviewed Child of Light last year as well, extensively praising it with a 90% overall score, and celebrating its graphics, soundtrack and surprisingly satisfying RPG gameplay, even if we lamented its brevity and occasional cringe-worthy rhyming. Aside from Xbox One, Child of Light is also available for PC, Xbox 360, PlayStation 3, Wii U, PlayStation 4, and PlayStation Vita.

As for Xbox 360 owners, they can start the month by downloading Gears of War: Judgment between April 1st and April 15th. The most recent chapter of the Gears of War series, and the final offering from Epic Games before the series was passed off to Black Tusk Studios, Gears of War: Judgment is a prequel that unfolds from the perspective of Damon Baird, before his infamous demotion. Leading Kilo Squad mere weeks after the Locust Horde menaces the planet after Emergence Day, Gears of War: Judgment introduces flashback combat that players can up the ante of with exclusive challenges that can present greater rewards. The game also supports four-player drop-in/drop-out co-op in its main story campaign, and includes an online multiplayer suite for up to sixteen players. Gears of War: Judgment is only available for Xbox 360. We reviewed it during its launch, stating that its variable combat and enjoyable co-op elements are a big plus, even if the shaky story and disappointing multiplayer hold it back from matching the splendour of Gears of War 3.

The second game that Xbox 360 owners with Xbox Live Gold memberships will be able to redeem between April 1st and April 15th is Terraria.

This Xbox Live Arcade indie world-building game takes cues from Minecraft, allowing players to build and develop their own settlements, but also allows them to tame and recruit both monsters and other characters, while also unfolding on a 2D plane, reminiscent of 16-bit Super NES-style graphics. Terraria has been very well-received since its initial launch, and is now available for myriad platforms. Aside from Xbox 360, the game is also available for PC, PlayStation 3, PlayStation Vita, Android, Windows Phone, iOS, PlayStation 4, Xbox One, and Amazon Kindle Fire.

Given that twice as many games are on offer, this is no doubt a very noteworthy month for Xbox Live Gold members. Child of Light will be a proven delight for Xbox One owners, while Xbox 360 owners are being spoiled between the likes of Gears of War: Judgment, Terraria and Assassin’s Creed IV: Black Flag, even if Army of Two: The Devil’s Cartel feels like a weaker filler offering. Still, if you have an Xbox Live Gold membership, you’ll have plenty of freebies to tide you over during the slower April weeks of 2015’s game release calendar.