Stephen Amell’s gotten pretty good with a bow, but how is he with a hockey stick? 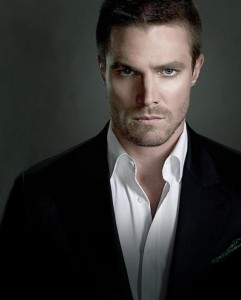 Amell is of course best known for portraying DC superhero, Green Arrow in The CW’s highly successful DC Comics-inspired drama series, Arrow, also voicing the character in recent DC video game release, LEGO Batman 3: Beyond Gotham. Amell is highly beloved by DC fans for his work on the show, to the point where he even hosted DC Entertainment’s panel at last year’s San-Diego Comic-Con! This should make him an anticipated fit for the role of Casey Jones amongst comic book fans especially. Amell has also made appearances in various other TV shows before hitting it big on Arrow, including New Girl, Hung, Heartland and Private Practice.

Earth to Echo’s Dave Green will be replacing Jonathan Liebesman as director, with Michael Bay remaining as a producer for the sequel. The second Teenage Mutant Ninja Turtles reboot movie is set to come to theatres on June 3rd, 2016.

Keep leaping to Eggplante for all news and updates on the Teenage Mutant Ninja Turtles movies.