The title of the episode says it all. Fans of The Flash are getting double the Trickster pleasure, with Mark Hamill reprising his role as the Flash baddie from 1990’s The Flash series, which he returned to in animated form within Justice League Unlimited. Along with the return of James Jesse’s Trickster, we also got an incarnation of the New 52’s second Trickster for the DC Television Universe, Axel Walker.

The great thing about Trickster is the fact that he’s a Flash villain with no superhuman powers, or larger-than-life weapons. He’s just a brilliant criminal psychopath with nothing better to do but torment The Flash, and the citizens of Central City. Naturally, Hamill is great as ever in the role as well, resulting in another highlight episode for the first season of The Flash. “Tricksters” is as brilliant as its title villains, and represents this series at its best! 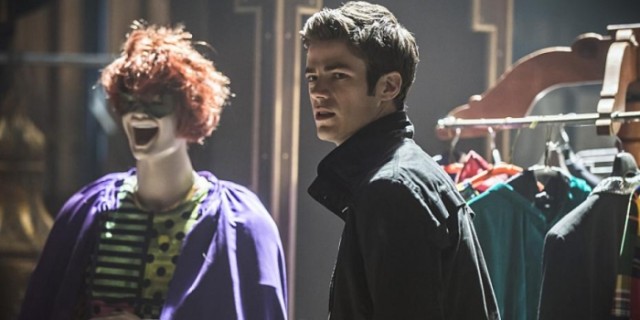 As big as the introduction of two separate incarnations of Trickster was however, the episode kicks off and occasionally intercuts with flashbacks to the night of Nora Allen’s death, and Henry Allen’s imprisonment. We get to see slow-motion showcases of the future Barry Allen doing battle with his arch-nemesis, Professor Zoom/Reverse Flash, as Barry tries to keep Zoom away from his younger self. Barry’s mother truly was an inadvertent casualty, but that’s not the biggest shock. The biggest shock comes when Reverse Flash removes his hood after his power depletes, and… Wait! That’s not Harrison Wells! What’s going on here?!

The implementation of these flashback devices was superb, in an already superb episode with the Trickster material alone. We see the true face of Eobard Thawne, Eddie’s villainous descendant from the future, as he stalks Harrison Wells, and conspires to use his scientific mind to rebuild the technology necessary to time-travel back to Eobard’s own time. Why Eobard felt the need to go back in time and kill Barry as a child in the first place is still a mystery, but this episode put another piece of the puzzle in place, when we see Eobard cause the car crash that kills Wells’ fiancee, then stealing both Wells’ body and mind using a form of ‘genetic camouflage’, leaving the real Wells as a drained, decrepit corpse.

This helps to explain why the respected and beloved Harrison Wells could suddenly turn to villainy, and creates an interesting conflict later in the episode, which beautifully develops from Barry telling Detective West that he may have been right about Wells being a villain at the end of last week’s episode. Barry must rely on the counsel and wisdom of Wells to save the day, and when he doesn’t, the city ends up facing dire consequences at the hands of the Tricksters. Barry can’t shake the feeling that Wells is speaking from experience however, which leads to him theorizing that Wells is Reverse Flash, no doubt setting the stage for a big, dramatic battle at the conclusion of Season One.

Anyway, before all that, the city is menaced by Axel Walker, the second Trickster, with Detective West recognizing the M.O. of a former Trickster that previously caused mayhem throughout Central City in the 90’s. Said Trickster is Mark Hamill’s James Jesse, who is serving multiple life sentences in Iron Heights Prison. With Barry and Detective West forced to consult the old Trickster to stop this copycat, the episode sets up a brilliant device to showcase how things aren’t always as they seem.

It goes without saying that Hamill’s performance as the original Trickster is fantastic as well! He’ll effortlessly have you believing that the copycat Trickster is a tarnish on his bad name, even as Barry and Detective West run afoul of traps and the like in Jesse’s former lair, which features the old 1990 Trickster outfit as a cool nod to the previous live-action The Flash series.

Naturally however, when Axel threatens the city with a bomb, the police presence vacates Iron Heights, allowing Axel to break out Jesse, resulting in Barry’s father being taken hostage! This makes for a cool reunion between John Wesley Shipp and Mark Hamill, with the Trickster arguably being the arch-nemesis of Shipp’s Flash during the 1990 TV series, though it’s unfortunately pretty short-lived. 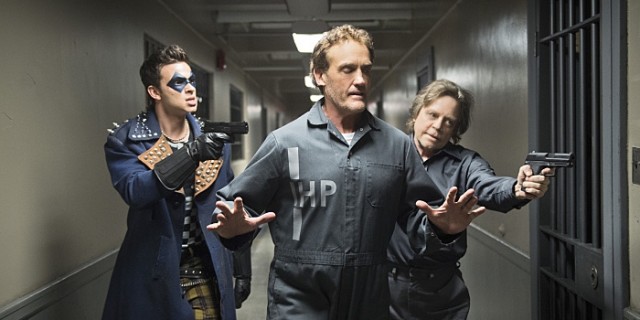 Instead, Axel and Jesse infiltrate a mayoral pep rally, and spike the champagne of all of the guests (including Iris!), telling them to transfer all of their money to the Tricksters for the antidote to a lethal poison that activates in an hour. Barry rushes to the scene, only to have a bomb placed on him that forces him to keep his speed above 600 mph, or else he’ll explode! Barry must try and keep running, with Wells coaching him into vibrating through a wall to get the bomb off safely. Barry having to swallow his pride and listen to his prime suspect in his mother’s murder was a big moment, though it did allow him to get the bomb off, speedily thrust an antidote into each guest, and apprehend the two Tricksters. We also see Barry rescue his father, and unmask himself before him. The emotional reaction by Henry to seeing that his son is Central City’s hero was very well-earned, and it’s tough not to smile along with them when it happens.

Barry is also made to unmask himself in front of Eddie by Detective West, who confides in Eddie that the two will need his help to keep Iris safe, after their suspicion of Wells continues to kick into high gear. The inclusion of Eddie into the Flash fold may be a bit forced, but it should present some interesting developments going forward, especially since we know that Eddie’s family line will eventually spawn the greatest enemy that Barry will ever know! 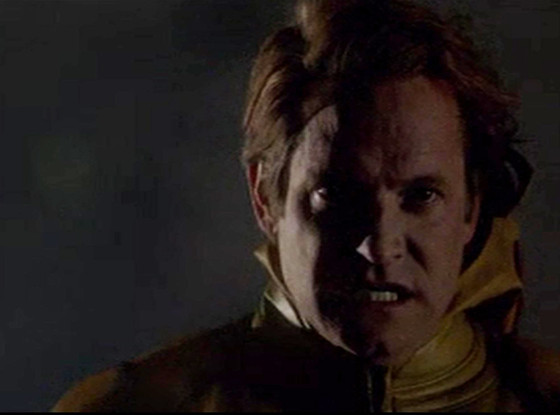 With its exciting new foe(s) and fantastic story material, “Tricksters” was an excellent episode in every respect. Hamill in particular will prove to be a very welcome addition to Barry’s Rogues Gallery, and even when we think we’ve solved the mystery of Harrison Wells/Eobard Thawne, there’s yet more twists to mine. Brilliant stuff!

The Flash 1.17: "Tricksters" Review
The Flash hit a spectacular high point with "Tricksters", which gave Barry one of his best foes yet in Mark Hamill's Trickster, and continued to delve beautifully into the Wells/Thawne mystery!
THE GOOD STUFF
2015-04-01
96%Overall Score
Reader Rating: (0 Votes)
0%