As the case against Sandpiper Crossing continues to heat up, Jimmy’s big boost from last week came to a screeching halt at the end of this week’s episode, “Pimento.” Once again, Better Call Saul has demonstrated an impeccable ability to play with audience expectations and emotions, without anything feeling false or cheap. At the same time, it continues to beautifully illustrate how a man so well-meaning and so desperate to better himself could fall so far into complete and total rejection of honesty.

The main story arc of the episode has Jimmy and Chuck putting together a pretty strong case against Sandpiper. Chuck however rightfully points out that they can’t take on a corporation that huge without some serious help. Despite Jimmy’s reservations, Chuck urges him to present the case to Hamlin, Hamlin and McGill, even volunteering to go to the office with Jimmy, albeit with a foil blanket under his suit. 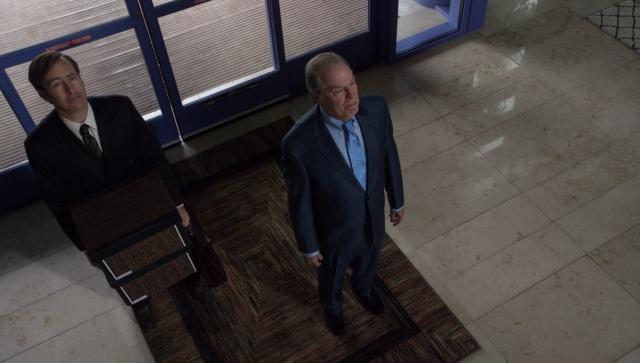 Chuck is clearly an extremely respected lawyer, as we see the entire firm applaud for him upon his return, and readily humour Chuck’s aversion to cellphones and other such technology, with a total blackout. Probably a little unprecedented for a prestigious law firm in a grounded show, but whatever. Clearly ready to embrace Chuck with open arms, Hamlin, Hamlin and McGill inevitably slights Jimmy, giving him a pay-off at the cost of Jimmy abandoning the case, with the firm still refusing to hire him.

This cloud hangs over Jimmy for most of the episode, with Jimmy blaming Howard for putting his personal feelings ahead of Jimmy’s professional drive, something he also confides in Kim. Kim tries to stick up for Jimmy, but fails, and subsequently urges him to just take the money and run. It creates a very interesting conflict of professional integrity for Jimmy, one of many, and he eventually decides that there’s nothing he can do, and he might as well take the payoff. It actually echoes the corner he was backed into with the Kettlemans a bit. 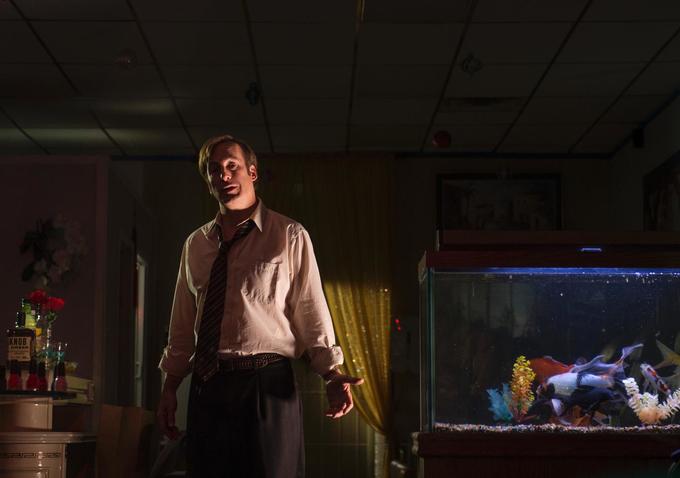 As Jimmy soon learns however, it wasn’t Howard that stiffed him out of his shot at becoming the big lawyer he deserves to be. It was none other than Chuck, who covertly called the firm the morning before, and urged them not to hire Jimmy. Jimmy confronts Chuck about this, with Chuck responding by saying that Jimmy is not a real lawyer, and he went to a low-rate school without actually dedicating his very life and soul to the law. He tried to fake his way into a law degree, because he’s Slippin’ Jimmy, and that’s all he’ll ever be. Ouch.

The great thing about this betrayal, beyond its perfect setup and execution, is the fact that it’s difficult to truly ascertain which man is in the right here. You can tell that Chuck doesn’t dislike his brother, but he makes a valid point about the difference between the two men being that Chuck is more honest. How can Jimmy defend the law with his penchant for dishonesty? As Chuck states, giving Jimmy power over the law would be like giving a chimp a machine gun. Oh, Chuck has no idea how right he is by the time the events of Breaking Bad unfold…

Regardless, Jimmy drives off in a rage, and that’s where the episode concludes. Chuck clearly cut Jimmy deep, and this appears to be one of the bigger catalysts for pushing Jimmy along the road to becoming Saul Goodman. After all, it’s yet more evidence that no matter how hard Jimmy tries to mend his ways, he’ll never truly stop being Slippin’ Jimmy. Is that his true calling? Well, we know it is, but he doesn’t yet.

This episode also delivered another big story arc for Mike Ehrmantraut, who has officially begun his career as a fixer-for-hire. Taking on a protection job, Mike is antagonized by one of the other men for not bringing a gun. Easily subduing the man and humiliating him in front of the client, Mike also scares off the other man, and then takes the rest of their shares to finish the job. Damn! Now that was a very cool scene!

Even better however is Mike proving that he knows the criminal game well, demonstrating that not bringing a gun was ultimately for the better, as the deal happened off of the books, with the buyer being revealed to be Nacho, dealing under the table without Tuco’s knowledge. Mike’s speech about the pill smuggler being a criminal, but not necessarily a bad man, was also very thought-provoking and excellently-delivered. Mike recounting that he’s known crooked cops, honourable thieves, filthy priests and altruistic murderers, among other things, does an incredible job of demonstrating the brilliant moral ambiguity of both the human condition, and of the highly nuanced Breaking Bad universe that Better Call Saul inhabits. As with the conflict of Jimmy, your profession doesn’t define you, and nor does the law. It’s quite a superb speech, and one that Jonathan Banks naturally delivers flawlessly.

“Pimento” stood as an especially great episode of this especially great series, setting a great stage for next week’s season finale in terms of both tone and narrative. It’s perhaps one of the best showcases yet of why Better Call Saul has easily proven to be one of the smartest and most satisfying new shows of this television season!