Better Call Saul’s first season finale didn’t disappoint, as Jimmy is left to confront his brother’s betrayal from last week’s episode in only one way; Give his case over to Hamlin, Hamlin & McGill. With nothing left to lose, Jimmy takes a trip back to Cicero to reunite with his grifting buddy, Marco, and tap back into his past as a con man.

It’s no doubt predictable that Jimmy’s first real fall from the higher path would be reserved for the season finale, when Jimmy has taken one hit too many in his effort to be a hero. Upon rediscovering the con man game with Marco, Jimmy is reminded of what initially drove him, with most of the episode showcasing the unique bond that Jimmy has with his grifting partner. 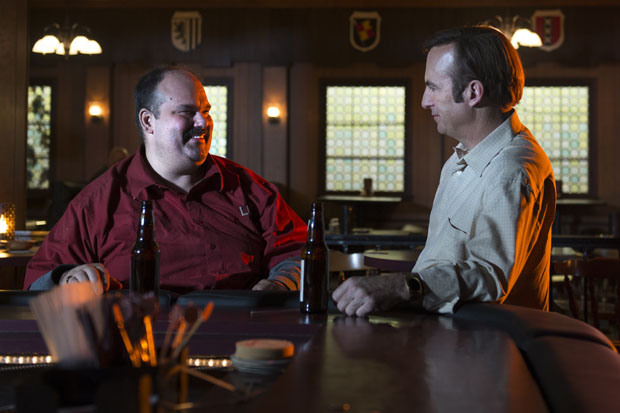 Appropriately, many of the extended cons that the episode showcases are great stuff as well. Whether it’s pretending to fight over a very valuable misprint coin, or simply convincing some girls that Jimmy is Kevin Costner and Marco is his manager for an easy lay, Slippin’ Jimmy and Marco appear to be back in full force. This led to another episode with more humour and wit to help compensate for the dark conclusion of last week’s episode as well, continuing to demonstrate how brilliantly this show can move between comedy and drama without missing a beat.

Marco’s reaction to Jimmy being a legitimate elder law lawyer was pretty interesting as well. It’s clear that Marco has no intention of moving on from conning, despite Jimmy’s intent to grow up with the tutelage of Chuck, glimpsed in the opening flashback when Jimmy tries to initially walk away from Cicero, conning and Marco. After his brother turned his back on him however, it’s small wonder that Jimmy backtracked and wondered if he had it right the first time.

On another note, we also finally get some details on what Jimmy was arrested for in another flashback midway through the season, after he reacts badly to having to give his case away at the nursing home he voluteers for. Apparently, he defecated in the sunroof of a man who had, “Wronged him”, not realizing that the guy’s kids were in the back seat, hence why he was charged, and threatened with being made a sex offender. Well, that’s certainly something. Still, it fits the darkly twisted humour of Better Call Saul expertly, and makes a whole lot of sense when it comes to filling in the holes of that mysterious flashback that the show hasn’t answered until now.

Regardless, Jimmy eventually realizes that a week has gone by with Marco, and decides that he must return to Albuquerque and pick up where he left off. It’s noble to see Jimmy ultimately choose the higher path again at first, though Marco convinces him to pull one last classic job, the same con that we first glimpsed the two doing in another flashback at the start of a previous episode, where Marco feigns being drunk, and Jimmy tries to trade his wallet for a seemingly valuable knock-off watch that is actually worthless. Seeing as the watch forger ended up being deported, this really is the last time that the two can pull this job. 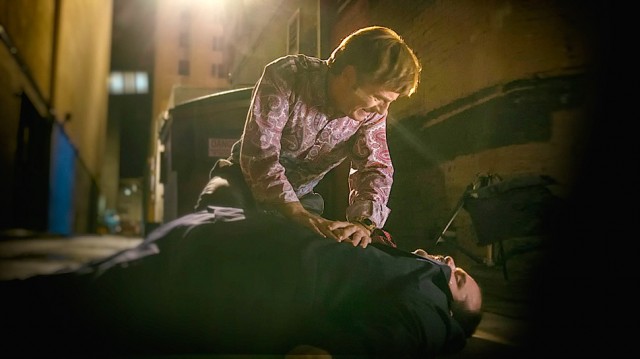 So, Jimmy finds a mark and brings him to the fallen Marco, playing out the con, before realizing that Marco is actually having a heart attack. The man takes off with Marco’s wallet before Jimmy can stop him, with Jimmy frantically trying to call 911 as Marco dies in his arms. It’s a tragic wake-up call for Jimmy, who attends the funeral, haunted by Marco questioning why Jimmy didn’t just take the money that he swiped from the Kettlemans on either occasion. Even so, he receives good news from Kim, who reveals that another firm in Santa Fe took an interest in Jimmy’s case against Sandpiper Crossing, and wish to make him a partner with them. It seems like Jimmy’s happy ending is within his grasp, despite the tragic loss of his friend…

… But just as Jimmy is about to seize what he’s worked for, his darker side wins out. Right when he arrives to meet the other firm, Jimmy drives back to talk to Mike Ehrmantraut, now fully entrenched in his fixer work, to ask him why he didn’t swipe the money himself. Mike explains that he was hired for a job, he did the job, he was paid, and that was that. This was a fantastic callback to the insight into Mike’s philosophy of a man’s code during last week’s episode, but more importantly, it inspires Jimmy to drive off into the sunset and fully abandon his old life. The first season thus ends with Jimmy driving away with a smile on his face, having forsaken the moral high ground, and taking his first big step to becoming slick criminal attorney, Saul Goodman for the events of Breaking Bad.

“Marco” capped off the first season of Better Call Saul on an excellent note, bringing the foundation of Jimmy’s forsaking of being the hero together perfectly, and setting the stage for what’s hopefully an equally excellent second season. Since AMC automatically picked up Better Call Saul for an initial two-season order, we already know that we can look forward to Bob Odenkirk’s fan-favourite character again, and you can bet that I’m extremely excited to see where his newfound amoral direction takes him next!