If you’re still playing Call of Duty: Black Ops II, 2012’s entry in the highly celebrated first-person shooter franchise, you may have noticed an update go live that has led to quite the interesting in-game advertisements.

Strange symbols appear on advertisements in the game, which, when deciphered, take players to a special Call of Duty account that one can add to their Friends List on SnapChat. The SnapChat account sends cryptic messages when it’s accessed, beginning with, “Listen only to the sound of my voice”, and later adding, “Let your thoughts drift. Let the bad memories fade. Let peace be upon you.”

Naturally, the obvious speculation is that Activision is starting to tease the next Call of Duty game, which, over the past few years, have all been announced around the start of May, to build up a month of buzz before a proper showcase at E3 in June. Given that Activision has previously confirmed that Treyarch will be developing this year’s Call of Duty installment, the other obvious speculation is that the game being teased could be Call of Duty: Black Ops III. This would explain why its first viral nuggets have been teased in Call of Duty: Black Ops II, not the most recent Call of Duty: Advanced Warfare by Sledgehammer Games.

The mysterious messages appear to be a callback to the hypnotic state of suggestion that protagonist, Alex Mason undergoes in the original Call of Duty: Black Ops. Both Alex and his son, David featured as protagonists in Call of Duty: Black Ops II, which jumped between a past period as Alex in the late 1980’s, and a future period in 2025 from the perspective of David. 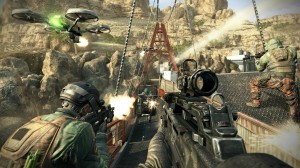 It’s entirely possible that Treyarch may be preparing a new Call of Duty game entirely, similarly to how co-developer, Infinity Ward abandoned their Modern Warfare sub-series to introduce Call of Duty: Ghosts in 2013. Still, Call of Duty: Black Ops III seems to be the obvious choice of what’s being teased, a game that Activision will no doubt draw back the veil on next month. Releases on PC, PlayStation 4 and Xbox One are no doubt inevitable, though it remains to be seen whether this new installment in the series will continue to support the last-gen Xbox 360 and PlayStation 3. An even bigger question will be whether this new Treyarch game releases on Wii U, which Call of Duty: Black Ops II was among the launch titles for, though Call of Duty: Advanced Warfare ended up entirely skipping Nintendo’s console.

Regardless, keep targeting Eggplante for your essential updates on the Call of Duty series.