Many gamers’ worst nightmares are about to expand to the big screen! 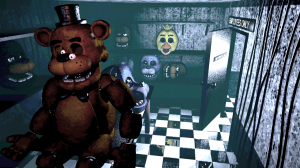 Five Nights at Freddy’s creator and developer, Scott Cawthon has struck a deal with Warner Bros. to produce a film adaptation of his hit indie horror game series. The movie will be produced by Warner Bros.’ Vertigo Entertainment, with KatzSmith Productions’ Seth Grahame-Smith and David Katzenberg both serving as producers.

Writers haven’t been selected for the movie yet, let alone cast, though it’s probable that the movie will follow the events of the first game in the series, which takes place in the decades-closed Freddy Fazbear’s Pizza family restaurant after hours.

There are three Five Nights at Freddy’s games available at present, all of which have been released for PC, iOS and Android. The object of each game is to survive a minimum amount of time while being mercilessly stalked by Freddy’s now-sentient animatronic mascots, who are all out to kill you. The game sports a point-and-click interface, and relies heavily on players using video screens to keep tabs on where each mascot is. All three games have received huge critical and community acclaim, and the PC versions of each entry are particular favourites amongst YouTube personalities.

Keep stalking Eggplante for all news and updates on Five Nights at Freddy’s.