iZombie still has yet to stumble in its debuting episodes, with “Liv and Let Clive” once again being a very entertaining offering, one that paints Detective Babineaux in an interesting new light.

After Liv eats the brain of a Chinese gang member that was apparently kicked to death, she develops extreme paranoia and anxiety. Making matters worse is the fact that her visions then show her Detective Babineaux during his days working in Vice, where he contributes to beating and intimidating the victim and his pals. This leads to Liv suspecting that Babineaux is a dirty cop, something that her new brain constantly asserts upon her. 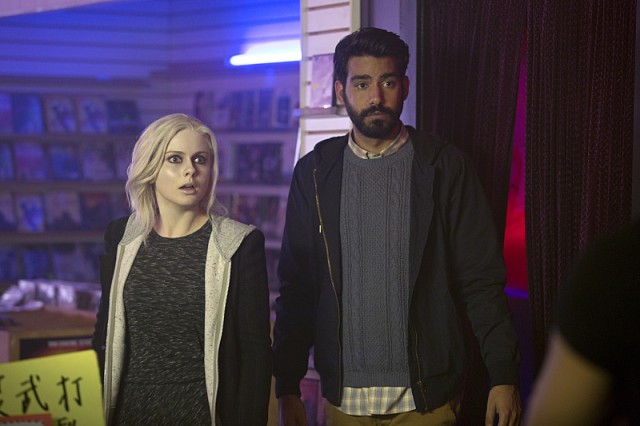 With “The Exterminator” going to darker territory last week, “Liv and Let Clive” relaxing a bit more was nice, even if it still dealt with some effectively grim subject matter. Despite Babineaux refusing Liv’s help this week, Liv ropes Ravi into helping her investigate Babineaux as much as she is her victim, which gets the two in trouble on more than one occasion. Still, seeing the zombified Liv try and feign being an airheaded party skank to try and justify her trip to the gang-run video store is really funny stuff.

Also funny, albeit bordering on stereotypical, was Liv realizing that her brain has taught her kung fu. This comes into play for the climax, when Liv is confronted and suspected of being a cop by her killer, whom she must fight off in her room, just in time for her brother to come home as well. It’s an entertaining, albeit somewhat goofy climax for this week.

It’s also inevitable that Babineaux is not going to end up being dirty. He is a lead character after all. Still, seeing how Liv’s paranoia gets both him and a cop partner in trouble was pretty intense, even if it was all wrapped up rather easily, compared to last week’s sense of bittersweet victory. Some cases are bound to go more easily than others, and even if we knew it couldn’t be true, the greater examination of Babineaux’s past did make for some interesting story material. 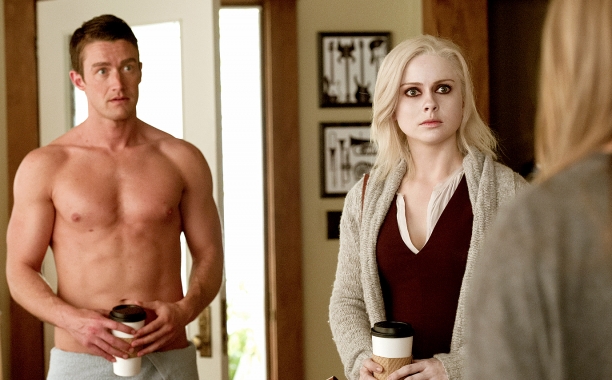 Ravi also got a bigger arc this week, when Liv makes a crack about him moving in with Major, after Liv becomes displeased to see Major hooking up with another girl, one who is quite serious about him. Ravi and Major actually end up hitting it off after Major comes to the morgue (over their shared love of Diablo III, natch), and Ravi eventually decides to move in with Major, confessing that he just didn’t want to admit to Liv that he wanted to leave his crappy neighbourhood. This should hopefully give Major more to do on the show, since so far, he’s just been a tedious reminder of Liv’s former life that hasn’t done much for the series yet. The two already have a fun dynamic with each other, and hopefully their taste for video games and Saturday sports will lead to more amusing hijinx down the line.

Finally, the episode took a lot more time to shed light on Blaine’s operation this week, as we see two of his bumbling goons conspire against him. The two try to woo away Blaine’s cougar squeeze, only to be ratted out and get a bullet in the brain. Well, they probably had that coming. Blaine replaces them with some big musclebound bruisers, so we’ll see how that goes.

Getting insight into how Blaine and his older girlfriend blend in is also very interesting, with spray tans, hair dye and other cosmetic treatments effectively masking their zombie condition. In fact, one has to wonder why Liv doesn’t use more of that stuff, even if the show hinted that she’s considered it in the pilot. Regardless, we also learn that Blaine gets his brains from a local butcher, which also serves as a front for his operation. This seems to beg the question of whether Blaine takes on the personalities and memories from the brains he eats, as Liv does, or whether that’s a condition unique to Liv. So far, it looks like only Liv has that trait, but we’ll see. 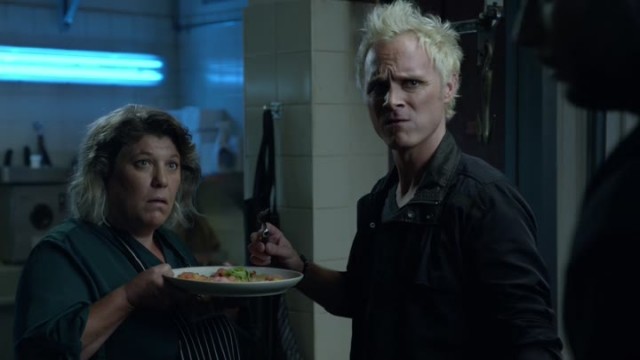 “Liv and Let Clive” was an interesting episode with plenty of good story material and humour, even if its case-of-the-week faded into the background amidst all of the big character development at play for Babineaux and Blaine especially. Still, iZombie has not failed to entertain with any of its episodes at this point, and it feels like every new thing we learn about the lead cast is a worthwhile one, even if there’s still plenty of questions to ask about Babineaux’s past, and Blaine’s scheming.

iZombie 1.4: "Liv and Let Clive" Review
iZombie delivered an episode that was big on character development and humour this week, giving a bit more of a peek into Babineaux's past, and revealing how Blaine is getting away with his nefarious zombie deeds.
THE GOOD STUFF
THE NOT-SO-GOOD STUFF
2015-04-08
87%Overall Score
Reader Rating: (0 Votes)
0%