NOTE: Full spoilers from throughout Season Five of The Walking Dead, including multiple major character deaths, are present in this review

The Walking Dead’s fifth season was a good season overall… But it was also a frustrating season filled with missed opportunities and botched storytelling.

This season started with no shortage of amazing ideas. The Terminus cannibals. Grady Memorial. The quest for Washington. The conflicts within Alexandria. It all adds up to arguably what could have been the best season of the show yet, on paper. The problem however came in some of the execution. There were some truly brilliant episodes in Season Five, sure, with “Strangers”, “What Happened and What’s Going On”, and “Try” all feeling like particular highlights. Even the fan-wanking “No Sanctuary” was pretty good! Problem is, there were also some real let-downs too, with “Four Walls and a Roof”, “Coda” and “Conquer” feeling like the most infuriating duds, and unfortunately, two of those three were high-profile finales. 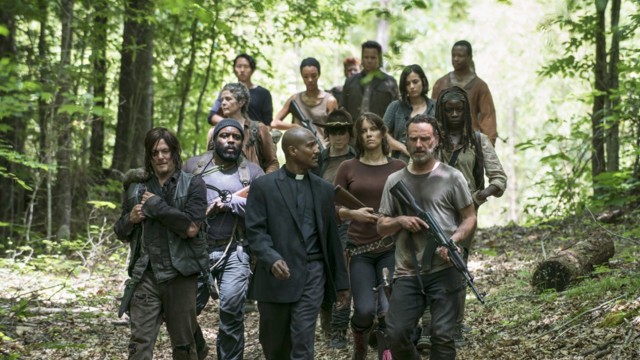 On the one hand, the huge count of developments led to a season with a more exciting pace and more water cooler-worthy discussion, but on the other, it led to Season Five feeling more like a sloppy mess than it probably should have. To say that Season Five is the best season yet, as it clearly set out to be, would be to give The Walking Dead a free pass, when the showrunners clearly got lazy in several places. Too many characters were introduced, just to be tossed away. Too many times did the show spin its wheels, and not really get anything done, with “The Distance” being a very annoying testament to that. Too many rushed, sloppy storylines were brought up, and then promptly abandoned. Worst of all is that the branching narratives and timelines in the front half only caused more confusion, and made for a season that felt very rushed and careless at its worst. It seemed inevitable that Abraham’s initial quest to Washington would fail for example, as a true Walker cure would mean the end of the most watched drama series on television, but the showrunners cancelled it out way too quickly and easily, making one wonder why they even bothered.

Never was this narrative laziness more evident than with the Terminus arc, and with Beth’s callous, unnecessary death, but let’s start with Terminus. The early marketing showed that Terminus was supposed to play a big part in Season Five, with Andrew J. West (Gareth) being made into a series regular… Then Gareth was killed off three episodes into the season. So much for that. Yes, it was cool to see Rick take vengeance on those Terminus jerks, even if it did come at the cost of Bob, but that doesn’t excuse the fact that these supposedly dangerous, scary Terminus baddies just ended up looking like a bunch of incompetent numbskulls. That kind of dampens the impact of Rick and his crew exacting their wrath on them. They didn’t end up deserving that cool moment, because it wasn’t earned. It’s the first of several stories that this season brought up, then promptly forgot about, because the showrunners couldn’t make up their damn minds about where to take Season Five, until the back half. 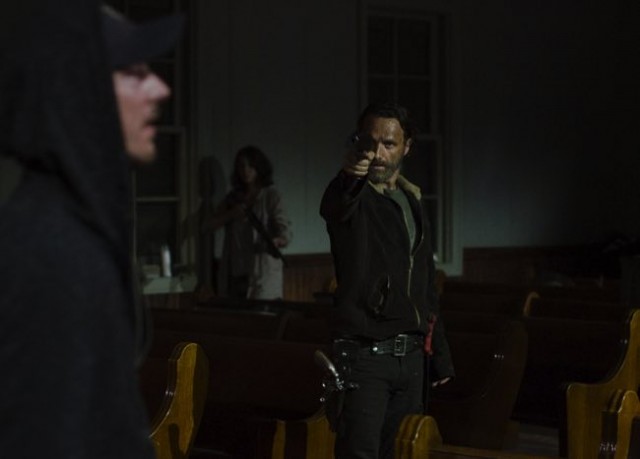 Likewise, Beth’s death was handled very poorly, something that even the show’s most ardent fans have taken issue with. Beth being killed by Dawn was extremely contrived, and the fact that Rick and his crew somehow walked out of Grady Memorial without a huge firefight that killed everyone felt too convenient. It was a very frustrating way to end the midseason finale, and it completely cancelled out the events of “Slabtown”, a fully Beth-focused episode which was meant to develop Beth into a stronger character, as well as introduce Noah, yet another character that was introduced, just to be killed off a few episodes later. In fact, the entire Grady Memorial arc felt pointless, and simply existed as a roundabout way to kill off Beth, and replace her with Noah, and Noah didn’t even stick! The grief of Maggie was handled well at least, and didn’t feel too overwrought most of the time, though by the time Maggie reached Alexandria, she seemed to have come to terms with it. I suppose she does still have Glenn, even if her entire family has been lost at this point.

Oh, and on the note of the characters, don’t even get me started on Father Gabriel Stokes, one of the worst and narratively laziest characters that this show has ever featured, past his debut appearance in “Strangers”! Gabriel is such a transparent plot device, that it’s not even funny. He clearly only exists to force conflicts when the writers can’t come up with a more organic way to do it. He’s a coward and a weakling, even more so than Eugene (who actually did become useful later in the season), and the fact that he was inexplicably spared by Sasha after he literally tried to kill her in the season finale, was complete and total bullshit. Ditto with Nicholas, another character simply introduced to force conflicts in Alexandria, whom Glenn let live for pretty much no reason. After Rick executes Pete and says this is the new order just a few scenes later, that makes both Sasha and Glenn look like idiots.

But, let’s take a break from the negatives. It sounds like I hated Season Five, but I really didn’t. Honest. It was just frustrating to see it drop the ball in so many key places. I could see so much potential in its ideas that just weren’t realized, either due to a lack of focus, or lazy writing. Fact is, the season still had some great action. Some of the character moments, especially with Rick, Carol and Daryl, were all incredibly well done. The idea of exploring Rick becoming a hardened survivor, increasingly detached from his former humanity, was wonderfully executed. Likewise, putting the survivors in Alexandria wonderfully realized the kind of toll that surviving the Walkers for however long has taken on them. It challenged the idea of them ever being able to go back to a normal life in a fantastic way, and this was when Season Five really did become the best season of The Walking Dead to date, though only partially.

This is the main reason why the back half of Season Five turned out a lot better than the front half. The show stopped with its ADD nonsense with the multiple perspectives, and storylines that it brought up just to toss out almost immediately after, and simply focused on one persistent conflict, one that felt fresh and novel, and one that the show hadn’t explored in the past. It finally helped Season Five reach its true potential, resulting in a string of strong episodes, particularly the season’s penultimate episode, “Try.” 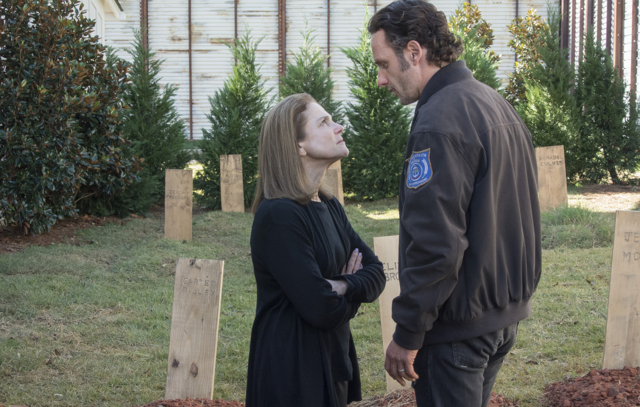 Then the frustration returned with the weak season finale, “Conquer”, an episode that arrogantly ate up a 90-minute timeslot, and did almost nothing with it. A civil war teased between Alexandria and Rick’s group never ended up happening. Daryl and Aaron escaped certain death thanks to Morgan stumbling across them in a contrived way. The whole domestic conflict between Rick and abusive husband, Pete ended with contrivance, and simply had all of Alexandria falling in line with Rick suddenly, and cleanly sweeping under the rug any semblance of doubt that the town previously had towards Rick’s group. Way too cleanly. This resulted in the season ending on a non-climax, and doing little with its extended episode beyond simply teasing next season, which felt lazy, and like the writers were procrastinating when it came to actually setting up a good new conflict to follow the Alexandria arc.

I suppose it would be fair to say then that Season Five had a bad habit of setting up buildups, with no payoffs. Either that, or it set up payoffs that felt forced and non-sensical, i.e. Grady Memorial and Terminus. The storytelling just didn’t flow very well in the front half of the season especially, even though the ideas in place were all awesome. If you take the season for its fundamental ideas, it really is the best season yet, but that’s only half of it. You have to factor in execution as well, and this is where Season Five too often stumbled. It was good, but it should have been amazing. 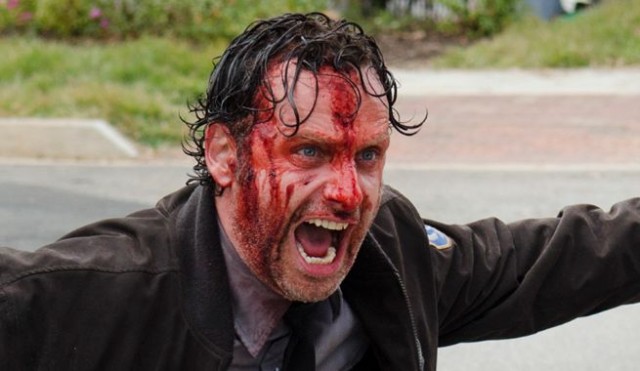 At the very least though, the faults of Season Five tease another great start, and hopefully better execution, for Season Six. Perhaps Season Six will realize the potential that Season Five fumbled. Rick’s way ended up winning out over the civil lifestyle of Alexandria, just in time for new foes, the Wolves to come into play, representing the farthest possible extreme for the kind of survivor that Rick and his crew have become. Again, it sounds like the pieces are all in place for a great next season. AMC just has to put them together better than they did in Season Five, which had a problem with just trying to throw everything at the wall, and see what sticks.

Come on, The Walking Dead. You’re better than that. Do remember that next season.

The Walking Dead: Season Five Review
The Walking Dead's fifth season was packed with great ideas, strong action, and some fantastic character arcs for Rick especially, but its problematic execution, frequently lazy writing and excess of throwaway characters made it fall short of its potential.
THE GOOD STUFF
THE NOT-SO-GOOD STUFF
2015-04-09
75%Overall Score
Reader Rating: (0 Votes)
0%