The Flash and Arrow are going to start criss-crossing quite a bit towards the end of both of their current seasons apparently, starting with this week’s The Flash episode, “All Star Team Up”, named for a brand of DC Comics about, well, teaming up between heroes. Specifically, Arrow’s Felicity Smoak and Ray Palmer made a trip to Central City after The Flash and Arrow both sat out last week.

While Ray made the trip to consult S.T.A.R. Labs about improving the stability and specs of his A.T.O.M. suit, the two sported apt timing, as a new villain is inevitably in town. Robotics expert and mad scientist-type, Brie Larvan, a gender-swapped version of Atom nemesis, Bertram Larvan, a.k.a Bug-Eyed Bandit from DC Comics, just so happens to be out for revenge against Mercury Labs due to her untimely firing from, well, being evil. Apparently, Mercury Labs isn’t very diligent when it comes to background checks for their sensitive robotics research. 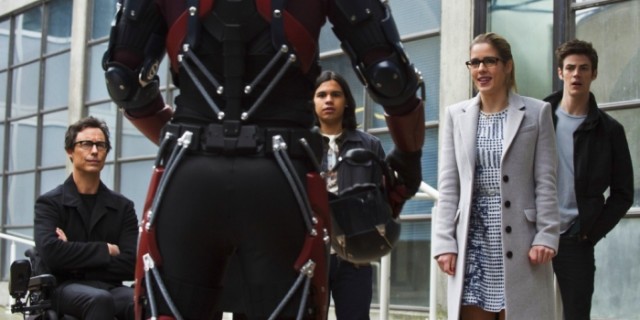 It’s rather funny too, since The Walking Dead’s Emily Kinney is left to guest star as another disappointingly shallow baddie for Central City, making one wonder how Ms. Larvan ever got hired by Mercury Labs in the first place, with such transparent motivations. It’s a let-down that we’ve had to get used to so many dull villains-of-the-week on what’s otherwise an excellent new drama series for The CW and DC Entertainment alike, but seeing as Ray is bound to make a habit of dueling with Larvan, particularly since she’s meant to stand as the dark antithesis of Felicity (a disappointing missed opportunity for the episode at this point), she’s bound to make a better re-appearance somewhere down the line, perhaps in that second spin-off series that’s in the works for the DC Television Universe, which we already know Ray will star in.

Aside from another by-the-numbers villain to round up though, The Flash still delivered a good episode this week. The character moments were especially superb, with every character getting a nice arc to work with, between Barry struggling to associate with Dr. Wells, Cisco and Ray bonding over the A.T.O.M. suit, Felicity trying to figure out why Barry has a bee in his bonnet (ahem), Eddie and Iris struggling with Eddie having to hide Barry’s secret from her, and Detective West getting caught up in every conflict all at once. Boy, West is going to need a vacation soon! 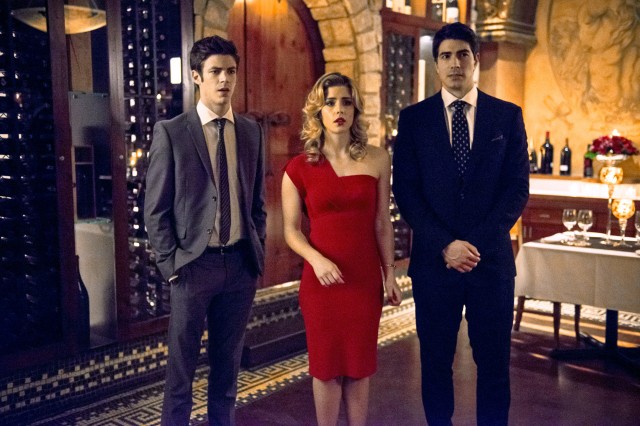 The Eddie/Iris drama felt like it ramped up a bit quickly, but it wasn’t bad. It’s also the first time in the history of this entire series where Eddie felt like an actual character for once, being the honest cop who now has to lie to the woman he loves, even when it’s not his will. Rick Cosnett has spent far too much time in the background, and it’s great to finally have him effectively utilized. It was tougher to sympathize with Iris, who feels like she’s pushing an issue and generally being insecure for no real reason, but whatever. We know she’s not going to end up with Eddie in the long term anyway. Still, it was interesting to see Detective West acknowledge that Eddie will need to become Iris’ husband if he wants more of a vote in her life than her father. Hmmm…

It was also exciting to see the tangent timeline that Barry created a few episodes back start creeping its way back into the space-time continuum as well. Cisco begins having sudden visions of his death at the hands of Wells in the previous timeline, which break his concentration throughout the episode. This is also why the episode’s ending, with Barry and Detective West showing Cisco and Caitlin that Wells is the Reverse Flash, leads to Cisco believing the two. Does this mean that the show is about to bring its darker former timeline into the fray for the end of the season? Maybe, given Caitlin’s clear attachment to Wells, we’ll see her alternate self become DC villainess, Killer Frost sooner rather than later. 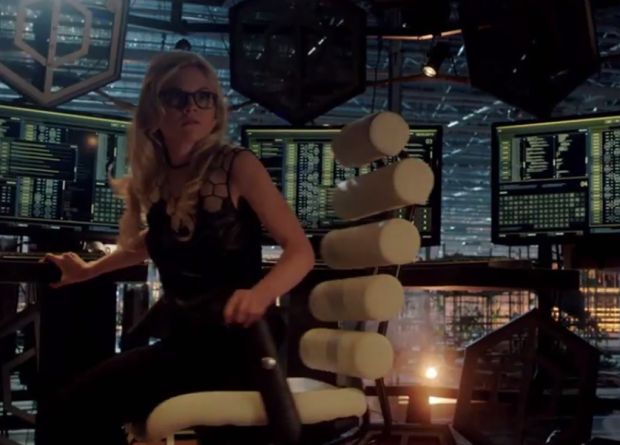 The real highlight of the episode came when Barry and Ray must work together to bring down Larvan, with some help from Felicity. Ray leads a swarm of the robotic bees that Larvan controls away from Tina McGee at Mercury Labs, while Barry tracks down Larvan, and must try to elude her insects while Felicity tries to hack into them and stop them. It’s a neat sequence of hacker-vs.-hacker mayhem, but it’s also disappointingly short-lived, with Larvan ultimately being subdued pretty easily. That’s a bummer. Still, given that she’s a major Atom villain, she’s bound to come back to the DC Television Universe later, like I said.

All appears to be well again as Felicity and Ray prepare to return to Starling City, with Ray’s suit made better than ever, and promised to sport even more improvements after Ray manages to snatch one of Larvan’s robot bees. Claiming that his actual aims should be to make the technology smaller, not bigger, it all presents another massive tease for Ray’s future size-changing abilities as The Atom, which he’ll hopefully develop at some point soon, since, as much as I love Ray, he is basically just a knock-off DC version of Iron Man so far, right down to the billionaire playboy disposition. 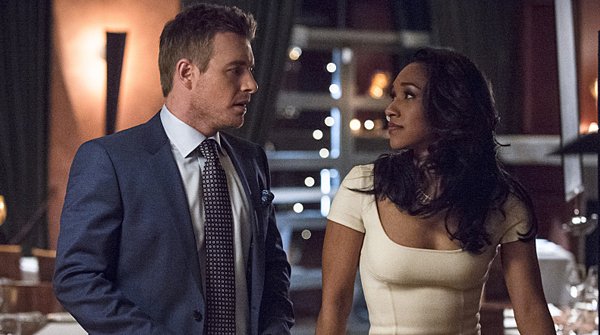 “All Star Team Up” could have used a better debut for the new female Bug-Eyed Bandit, but at least it delivered what its title promised. The effects work was actually great, and the action was generally solid, even if Larvan went down too easily in the end. Likewise, the character work really shone, and Felicity and Ray added plenty of great things to the familiar dynamics of Central City. This episode felt like a bit of a side jaunt, rather than a serious push forward for the season, but it was plenty entertaining nonetheless. At the very least, it also got Cisco and Caitlin in on the Wells conspiracy, nicely setting up a big old rift at S.T.A.R. Labs for the end of the season.

The Flash 1.18: "All Star Team Up" Review
Felicity and Ray's visit to Central City proved plenty entertaining, and presented some strong character arcs all around for The Flash this week, even if the first Atom villain's debut was underwhelming.
THE GOOD STUFF
THE NOT-SO-GOOD STUFF
2015-04-15
85%Overall Score
Reader Rating: (0 Votes)
0%