May and Skye pretty much wholesale hijacked this week’s episode of Agents of S.H.I.E.L.D., with both having pivotal character arcs, one being in flashback, and the other in the present time. “Melinda” does finally answer one long-lingering question for this series however. It finally reveals why May is known throughout S.H.I.E.L.D.’s agents and students as, “The Cavalry”, and why she hates that nickname so much.

As the flashbacks unfold seven years in the past, we see May and her husband, then happily married, talk about having children, and how much they’re looking forward to starting a family. Coulson comes in however, and brings May on a seemingly routine op to round up a super-powered woman called Eva Belyakov in Bahrain, before she’s seized by an opposing government. Naturally, the op goes badly, with a little girl being snatched as a hostage, and Coulson and May left to sit on their thumbs as an entire squad of S.H.I.E.L.D. agents is seemingly wiped out by Belyakov. 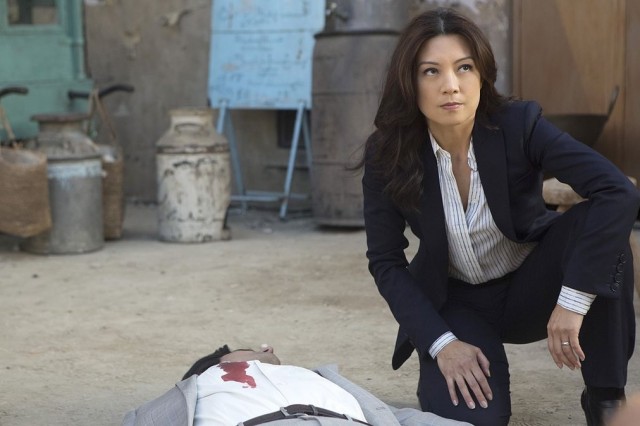 Eventually, May decides to defy orders and go in to perform a one-woman search-and-rescue, seeing that the agents have been taken control of with a cult-like mindset, demanding May’s pain. May manages to fight them off, and even manages to confront Belyakov, but is naturally outmatched by Belyakov’s super-strength… At least initially, before managing to drive a pipe shard through the woman, killing her.

It’s here however that May learns that the agents weren’t controlled by Belyakov, but by her daughter, the apparent hostage. Apparently, Belyakov and her daughter were Inhumans that fled Afterlife with Terrigen Crystals, which unnaturally triggered a mind control/emotion absorption power in Belyakov’s daughter, rendering her permanently insane and murderous. As the girl absorbs the life out of numerous agents, May is forced to shoot her dead in self-defense.

Later, May is rescued, beaten and bloody, with a platoon of seemingly turned agents dead, along with Belyakov and her daughter. Since May ended up substituting for the turncoat cavalry that was meant to salvage the op, May was henceforth nicknamed, “The Cavalry.” When she gets home afterward, we see her then become cold, refusing to let her husband hold her hand, and abandoning her idea to have children as a result of the incident, seemingly setting up the decay and eventual destruction of her marriage. It also explains why she transferred out of the field, and into a desk job, which is where she was at the start of this series.

This is a pretty heartbreaking story that Agents of S.H.I.E.L.D. executed quite well, particularly in how it effectively tied the incident back to the then-unknown background presence of the Inhumans. It explains much of May’s backstory, and explains the complicated relationship that she has since developed with her ex-husband.

The rest of the S.H.I.E.L.D. crew simply doddered around and continued to ask the same old questions about Coulson, not really accomplishing anything of note. It was largely a re-tread of the former conversations with Gonzalez and Bobbi from the past couple of episodes, with nothing new brought to the table. The only added variable is Gonzalez’s outfit doing recon on Fitz, seemingly unaware that he snatched the real toolbox for himself. Fitz even manages to make contact with Coulson and Hunter on this note, leading him, and by extension, Simmons, back to Coulson’s fold, with toolbox in hand, once again giving Coulson the advantage over Gonzalez.

As for the Skye material, it proved effectively emotional and satisfying, as Skye formally begin her training under Jiaying. Learning from Lincoln that Jiaying never takes a student, Skye becomes curious, and then anxious, rejecting the idea of finally being home, since she has never been able to settle anywhere in her life. Jiaying eventually breaks down and tells Skye her actual birthday when she claims she doesn’t know it, revealing the story of her birth, and making Skye realize the truth; Jiaying is her mother.

If you’re a longtime fan of the series, it was difficult not to tear up a bit at this reunion, which has been a long time coming. I’m quite curious about how Jiaying was, “Pieced together” by Cal though. One could make the case that Jiaying may even be a clone of some kind, but let’s be optimists, and assume that her Inhuman abilities allowed her to fully cheat death, with some help from Cal. It takes a good chunk of the drama out of Season Two’s earlier episodes, regarding Cal’s whole vendetta with Whitehall, but whatever.

From here, we get a brief interlude with Raina, who is continuing to bitch about her Inhuman state, recounting a spiteful dream of Skye being happy with her parents, while a bouquet of flowers lies on the table. This leads into a scene of Jiaying honouring a promise to Cal, urging Skye to have dinner with both of her parents, then being given the option of having Cal spirited away somewhere very far from Afterlife, never to be seen again.

The dinner scene is actually surprisingly nice, and it almost makes you feel like you mis-judged Cal, who is a perfectly pleasant and loving father now. Maybe he wouldn’t be such a monster if he was just allowed to be with his family, even if he is supposed to be the Marvel Cinematic Universe incarnation of villain, Mister Hyde. Regardless, Lincoln briefly walks in, seeing a bouquet of flowers on the table, and then puts together that Raina wasn’t dreaming, but seeing the future. Maybe this is the true beauty underneath Raina’s spiky exterior? We’ll have to see.

“Melinda” was all about heart and emotion, with passing moments of action in the May flashback, but mostly focusing on two key characters’ tragic backstories helping to resolve themselves, even if Skye found far more solace than May did in the end. The continued debate about Coulson building a base for super-powered people feels like it’s spinning its wheels a bit (even if we learn that May’s ex-husband has apparently secretly met with him about it), and for all we know, it’s forged evidence by Gonzalez, who may be doing this very thing himself.

Regardless, the show is at least starting to tie its separate conflicts with the Inhumans and the other S.H.I.E.L.D. together again. As the second season enters its final handful of episodes, particularly with the promise of Coulson, Hunter and Fitz now having to make an uneasy alliance with Ward, here’s hoping that the payoff is as satisfying as the buildup.

Agents of S.H.I.E.L.D. 2.17: "Melinda" Review
"Melinda" answered some key questions about the mysterious backstories of Skye and May this week, finally better tying together the S.H.I.E.L.D. and Inhumans storylines, even if the Coulson debate has started treading water a bit.
THE GOOD STUFF
THE NOT-SO-GOOD STUFF
2015-04-15
86%Overall Score
Reader Rating: (0 Votes)
0%