NOTE: Full spoilers from throughout the first season of Better Call Saul are present in this review

Breaking Bad has gone down as one of the best TV dramas in history. The multiple Emmy-winning series presented massive shoes to fill for its planned spin-off/prequel hybrid, Better Call Saul, which shifted focus to Walter White’s eventual crooked attorney, Saul Goodman. During the events of Better Call Saul however, Saul Goodman does not yet exist. At this point, he’s struggling attorney, Jimmy McGill, a former con man who has just gotten his law degree, and is trying so hard to mend his ways.

But we already know that Jimmy isn’t meant to be the hero, and Better Call Saul works with that angle wonderfully in its debut season. Sporting only ten episodes to start, Better Call Saul once again presents an outstanding human tragedy, ultimately standing alongside Breaking Bad as an envelope-pushing work of pure genius for AMC. Like its predecessor, it’s absolute must-watch television!

Where Better Call Saul diverges from Breaking Bad however is not just with its lead. It’s also a slightly less serious take on the Breaking Bad universe, even if it’s still a drama at heart. Still, creator and showrunner, Vince Gilligan’s twisted sense of humour has been cranked up in contrast to Breaking Bad, with Better Call Saul veering more heavily into the realm of dark comedy on a far more frequent basis. It’s a bit more watchable than Breaking Bad could be, but feels no less smart or interesting.

A big part of why Better Call Saul works as well as it does is no doubt the immense talent of Bob Odenkirk, who has proven that he is an equally capable leading man in the realms of both comedy and drama. He moves between both effortlessly as the proto-Saul Goodman, capturing a man who clearly errs toward one side of the moral spectrum, but is desperately trying to push against the current. There’s a charm in seeing a man fight so hard to do the right thing, even when he’s inevitably going to fail. Again though, it works in remarkable service to the show, which examines whether there’s any nobility in resigning oneself to a life of dishonesty and crime, and whether crime can be a destined calling like anything else. 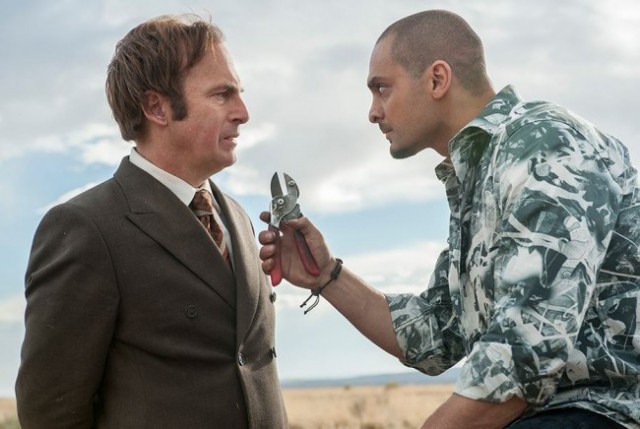 While there are a couple of other Breaking Bad cameos as well (though as Vince Gilligan promised, neither Walt nor Jesse show up in the first season), another veteran Breaking Bad character that gets something of an origin story in Better Call Saul is Saul’s future fixer, Mike Ehrmantraut. Jonathan Banks continues to play Ehrmantraut with an effective world-weary intensity, with Mike having as much appeal as he ever did here. One of the season’s episodes focuses almost entirely on Mike, and it’s a season highlight, showing just enough of a peek at how Mike ultimately fell out of law enforcement, with his own arc mirroring that of the future Saul Goodman quite nicely, and helping to explain the bizarre friendship and trust between these two men.

As with Breaking Bad, time jumps are also employed in the first season of Better Call Saul, which gradually insert more carefully selected pieces into Jimmy McGill’s backstory. We see the consequences of a crime that motivates him to try and get his life together. We see his past as a con man. Hell, we even see a glimpse of his (oddly prophetic) future after the conclusion of Breaking Bad to kick off the series, with Saul reminiscing about how he got to where he was, while watching one of his old law office ads on the television. As in Breaking Bad, the time shifts are never confusing, and are always done with care, always in outstanding service to the story.

As for the main season plots, the first half sees Jimmy trying to climb his way up the legal ladder, while simultaneously trying to care for his superstar lawyer brother, Chuck, who has electromagnetic sensitivity, preventing him from being near any electronic devices, or even outside. After trying and failing to win the services of a clearly guilty milquetoast family, the Kettlemans, who ended up stealing a bunch of money, Jimmy tries to do the right thing, with a little help from Mike, and ends up losing his chance to truly start his career over it. It presents a good start to any attempts at doing good resulting in the universe knocking Jimmy back on his dishonest course to becoming Saul Goodman.

The season’s second half then largely follows a big case, with Jimmy trying to make his way into elder law, and learning of a fraud racket at a large-scale retirement home that most of his clients live in, Sandpiper Crossing. Jimmy successfully enlists his brother’s help against Sandpiper, and even gets the case large enough to be handed over to his brother’s old firm, Hamlin, Hamlin and McGill, though the firm rejects Jimmy’s help, offering him a payout instead. Jimmy then later learns that his brother was behind the snubbing, with Chuck believing that Jimmy was never a real lawyer, and can never escape cheating his way through life, which seemed to be the biggest catalyst of Jimmy ultimately turning his back on becoming an honest lawyer.

Everything came to a brilliant head in Better Call Saul’s first season finale as well, with Jimmy going back to his hometown of Cicero to try and re-connect with his old grifting buddy. The two have some fun, before Jimmy decides to be a grown-up and head back to New Mexico. His buddy dies just before Jimmy leaves, which gives Jimmy time to re-think his life. Jimmy gets an interview for partner at a high-profile firm due to his work on the Sandpiper case however, and it seems like his life is finally coming together… Before Jimmy ultimately walks away from the interview, driving off into the sunset as he embraces the life of a crooked attorney, officially putting him on the path to becoming Saul Goodman for the events of Breaking Bad.

Better Call Saul could have so easily coasted on the massive success of Breaking Bad. It could have settled and half-assed it in so many ways. It didn’t though. Better Call Saul is just as smart and memorable as Breaking Bad ever was, even with a different character and an altered tone. It’s not afraid to forge its own bold direction with a new lead character, even if it simultaneously feels like a familiar and faithful addition to the Breaking Bad universe.

In its first season, Better Call Saul is nothing short of brilliant, providing another instant classic series for AMC’s catalogue!

Better Call Saul: Season One Review
Better Call Saul delivered to outstanding effect in its first season, succeeding as both a dark comedy and a provocative tragedy in its portrait of a man doomed to a life of dishonesty, even when the audience still wants to see the best in him.
THE GOOD STUFF
2015-04-18
95%Overall Score
Reader Rating: (0 Votes)
0%