After entirely sitting out the season premiere, Arya returned for the season’s second episode, finally making it to Braavos. After a long journey, she makes it to the sacred temple, The House of Black and White, and meets the master… Then gets refused entry. Oh. Darn.

Still, it’s great to see Arya again, even if every last element of her story was completely made up for the show, and wasn’t present in the source novels. Despite that however, Arya’s story material was quite good, as she obsessively recounts her list of deaths outside of the temple, before angrily tossing Jaqen’s coin into the nearby water, and living off of the streets as an urchin. 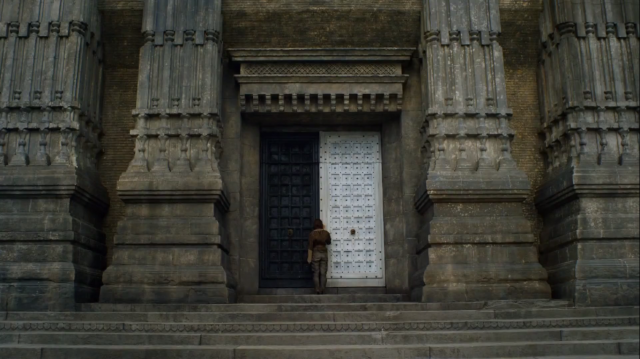 Arya remains tough-as-nails, ready to fight a group of would-be robbers, before the master of the House of Black and White returns, scaring off the thieves, and beckoning Arya to follow him. Sure, many viewers would have seen the next twist coming, but, yes, it was Jaqen H’Ghar all along. Arya’s arc then ends with her being invited inside of the temple.

As much as it might have felt pointless to add an extra sequence of street life with Arya that ultimately amounted to the same instant result from the books, it was useful in seeing that Arya has not grown soft since separating from The Hound. Likewise, her reunion with Jaqen H’Ghar was pretty satisfying after all of this time, even if, again, Jaqen wasn’t present in the books.

The other Stark family members also got plenty of interesting material this episode, with Brienne and Pod encountering Sansa and Littlefinger. Sansa surprisingly refuses Brienne’s service however, leading to an added, but enjoyable action scene of Brienne wasting a few of Littlefinger’s men. Pod is still inept as ever as her squire, but it still led to some amusing moments that helped add some levity to the episode. You can stand now, Podrick!

Back at King’s Landing, Cersei was her typical self, with Jaime getting the more interesting arc of recruiting Bronn for some sort of secret mission. Jaime even gets Bronn out of his betrothal to a rather chatty cathy, which Bronn probably sub-consciously appreciates, given the well-done subtle look of disgust that Bronn gives when he sees a castle he thinks he’ll be living in, only to then learn that he’ll be living in an even worse castle. It’s intriguing that Jaime might recruit Bronn of all people, begging the question of just what they’re up to…

On the note of Tyrion, he has continued his journey with Varys, which amounted to some dialogue, but not much else. Still, this did end with Tyrion declaring that Cersei can’t be ridiculous enough to send bounty hunters after every dwarf in the land, only to have the scene immediately cut to Cersei doing exactly that; Chastising a group of hunters after they deliver a head of a dwarf to her, one that isn’t Tyrion. Yet another funny moment was had afterward, when one of Cersei’s accomplices wants to keep the head. Boy, this episode was quite full of dark humour, wasn’t it?

Over at The Wall, Jon receives a generous offer from Stannis, who offers Jon the chance to claim the Stark name, and become Lord of Winterfell. Jon plans to refuse him, but this point becomes moot, when it becomes time to elect The Wall’s new Lord Commander. Alliser Thorne looks like he’s going to win the position, threatening Gilly’s place at The Wall, motivating Sam to speak up, humiliating the other candidates in the process (more comedy!), and nominating Jon for the honour. When the vote comes down to a tie between Jon and Alliser, Eamon casts his vote for Jon, and Jon is elected Lord Commander! It will be very interesting to see how Stannis responds to this, that’s for sure.

Aside from the Arya material, it was Daenerys that got the most extended focus this episode, as she continues to struggle with keeping order in Meereen. Debating what to do with the captured Son of the Harpy, Daenerys eventually decides to give him a fair trial. This comes on the heels of a brilliant scene that highlights Daenerys’ desire not to follow in her father, the Mad King, Aerys’ footsteps.

After the prisoner is murdered by a servant however, Daenerys is forced to make a challenging decision. Despite her initial intentions, she publicly executes the servant who defied her orders, leading to a crowd of Meereen’s citizens hissing, rioting and throwing rocks at her, which the Unsullied protect her from with a detail of heavy shields. This is another sequence entirely invented for the show that didn’t happen at all in the books, but again, like Arya’s storyline, it was well-executed.

The same was true of this episode’s ending, which had Drogon briefly return. Drogon sniffs at Daenerys, then roars and flies away, presumably rejecting her, as her other dragons did. One has to wonder if Daenerys will have full-blown rebellion on her hands by the end of Season Five at this rate. Maybe Varys and Tyrion coming to her will re-shift the scales, but for now, things are looking bad for the so-called ‘Breaker of Chains’ and ‘Mother of Dragons’.

In fact, of the many plots that this episode juggled, the only one that largely failed to satisfy was that of House Martell. A brief stint was made to Dorne, with Ellaria petitioning Prince Doran, Oberyn’s brother, to seek retribution for Oberyn’s death last season, by mailing Cersei back pieces of her daughter, Myrcella. Doran refuses, saying that he won’t mutilate an innocent girl for petty revenge, makes some passing mentions of Oberyn’s bastard daughters, and… That’s it. Honestly, it didn’t amount to anything but filler, and the Martell’s may have been better off simply waiting until next episode. 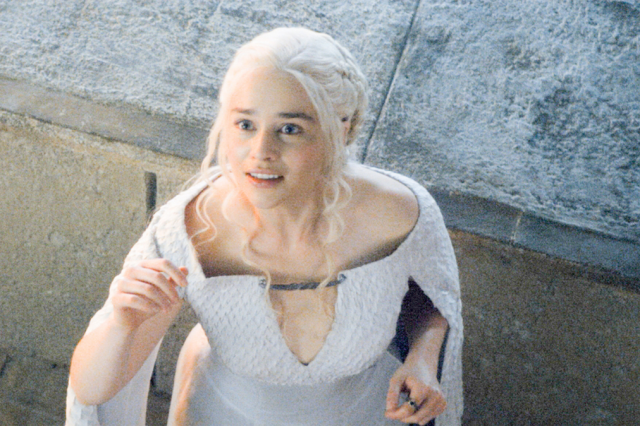 “The House of Black and White” was a more exciting and story-packed offering than the slower season premiere, especially with Daenerys’ rule being so aggressively challenged, and Arya finally making it to Braavos. The series is starting to move further away than ever from George R.R. Martin’s source novels too, with some wholesale invented plotlines that didn’t show up at all in the books starting to play out on the show, especially in Essos.

Good. It will give Game of Thrones a chance to truly elevate itself above the source material.

Game of Thrones 5.2: "The House of Black and White" Review
Game of Thrones picked up the pace significantly this week, between Daenerys' continued leadership struggles, Arya finally making it to Braavos, and Jon getting a surprising vote of confidence at The Wall.
THE GOOD STUFF
THE NOT-SO-GOOD STUFF
2015-04-21
90%Overall Score
Reader Rating: (0 Votes)
0%