Jim Gordon and Bruce Wayne both closed in on their respective quarries as Gotham continues to chug along nicely to its season finale in a couple of weeks. The show even found a surprisingly effective way to re-introduce Barbara, a character that has largely failed to resonate with pretty much any viewer, and tie her in with Gordon’s current manhunt for The Ogre. This resulted in a very good episode that continues to improve the show’s momentum over the last few episodes of Season One.

To start though, let’s look at Bruce. Sure enough, he’s not thrilled about Selina’s murder of Reginald during the previous episode, though nonetheless, he’s forced to enlist Selina’s services to continue getting to the bottom of his company’s dirty dealings. This comes into play when Bruce makes Selina his date for the Wayne Enterprises charity ball, and has Selina lift a key impression from the Physical Operations director, whom Reginald named in being a key part of the conspiracy.

On another note, the debate over Selina’s killing of Reginald was good stuff, and helps to lay the foundation for Bruce Wayne’s one rule as Batman in the future, where he’ll refuse to kill people. It’s not nearly as in-depth an examination as, say, Batman Begins, but seeing Bruce confronted over his desire to kill the man who attacked his butler and helped to put his own company after him, then rise above it, was satisfying to see. Bruce has become a far better character ever since the show started, and it’s great that Gotham has started to find a better place for him, when he initially wasn’t planned to be a part of the series at all, or at least not past the pilot.

As for Gordon, he finds himself threatened by The Ogre to stop investigating, or else someone close to him will get hurt. Naturally, Gordon responds with the courage that his post demands of him, and declares an open city-wide alert for The Ogre. He then tries to put Leslie into hiding, believing that The Ogre is coming after her.

Surprisingly though, it’s Barbara that ends up in the killer’s crosshairs, narrowly escaping being stabbed to death after she brings The Ogre back to her apartment, then goes on about being damaged goods, before kicking the killer out. Surprised and intrigued, The Ogre encounters her again at the Wayne Enterprises ball (a great way to connect the Gordon and Bruce arcs), and asks her if she’s through pretending to be something she’s not. This was a great sequence, and the dynamic between Barbara and The Ogre marks the first truly interesting utilization of Barbara’s character. Her dysfunctional attitude is finally done in great service to the plot, and the episode ending with Barbara being invited into The Ogre’s chamber of torture presents all sorts of interesting questions. I just hope that the show doesn’t take the easy way out and make her a victim again next week.

Meanwhile, Gordon and Bullock’s investigation starts to gradually unearth The Ogre’s backstory. They learn from the man’s father, the butler to a cruel rich woman, that The Ogre was tormented as a child, led into a fantasy of believing that he was the true son of the wealthy woman. The woman was The Ogre’s first victim, one who is still upstairs decomposing, while the butler pretends that she is still alive, so The Ogre can keep living off of her money. Wow…

This explains The Ogre’s apparently rich background though, while presenting a great twist that makes him more than just a bored rich brat, and that was great to see. Likewise, the reveal that The Ogre used to be disfigured, and was fixed up at a plastic surgery clinic where he began his serial killer practices, was also quite well-done. Will this potentially tie him in with the Dollmaker, especially with Fish Mooney being absent this episode? I guess we’ll see.

Over on Penguin’s end, Penguin conspires to hire assassins to take out Maroni and his enforcers, only to find Maroni visiting the club to talk to Gertrude. Maroni eventually reveals to Gertrude that Penguin is not the perfect son she thinks he is, explaining that he has killed and extorted his way to his position like a true mobster. Gertrude later confronts Penguin about the allegations, saying that if he lies to her, he’ll break her heart. Sure enough, Penguin lies, and later answers the door to one of Maroni’s men delivering Gertrude flowers. Penguin orders the man to give Maroni the message that he’s a dead man, but then opens the door again and says he’ll tell Maroni himself, brutally stabbing the delivery man to death with a piece of glass. Yikes. Still, it is wonderful to have Penguin restored to his full, savage glory, after the show didn’t seem to know what to do with him for a little while. 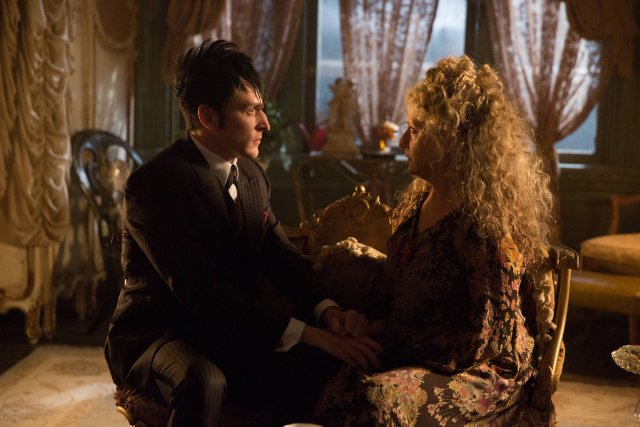 Another big character this episode however was Nygma, who learns that Ms. Kringle is being abused by her cop boyfriend. Nygma threatens the man, but fails to make any difference. He then follows Ms. Kringle home, and confronts the cop outside, ordering him to leave the city. The cop punches Nygma in the gut, but is surprised to see that he has been stabbed. Nygma then finishes stabbing the cop to death, only to later freak out at what he’s done.

Cory Michael Smith absolutely nailed this scene, providing some perfect subtle flashes of insanity, delight and terror that tease Nygma’s inevitable future of villainy as The Riddler. It was one of the best parts of this entire episode! It’s just too bad that Kringle’s boyfriend was such an obvious jerk, which took a bit out of Nygma’s first murder. It makes one wonder what Kringle ever saw in such an obvious misogynistic brute.

Regardless, Gotham seems to be finding a healthy groove again with “Under the Knife”, only having two episodes left to hold that groove steady, before the season is over, and the showrunners have a chance to tweak the show a bit to be more consistently good in Season Two. For now though, we’ve hit some pretty smooth, satisfying sailing. Let’s hope nothing disturbs it in the last two episodes of the season.

Gotham 1.20: "Under the Knife" Review
Gotham delivered a well-executed episode for every major character, with Bruce and Gordon digging deeper into their respective foes, Penguin getting hit in a vulnerable place, and Nygma taking a very dark turn.
THE GOOD STUFF
THE NOT-SO-GOOD STUFF
2015-04-21
86%Overall Score
Reader Rating: (0 Votes)
0%