Game of Thrones felt like it sort of went back to basics this week. The episode was entirely dominated by good old Stark and Lannister arcs, with Essos being almost entirely pushed into the background, and Daenerys not even appearing at all in the latest episode. Ok, we did have a Daenerys lookalike prostitute, but that doesn’t count.

That’s not to say that “High Sparrow” was a lesser episode though. It was fantastic stuff! The season is nicely catching up with the core characters as we prepare to move into some higher conflicts, effectively allowing us to sit on the whole Meereen riot from last week, and letting Westeros take focus again. The only absent Stark, again, was Bran, whom we probably should catch up with at some point. For now though, Sansa, Arya and Jon Snow had plenty to work with. 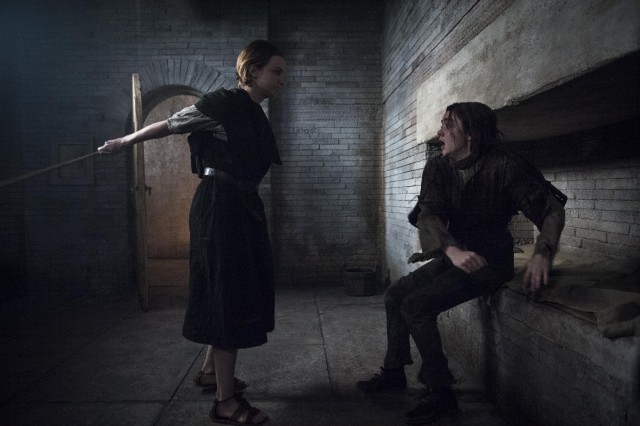 Likewise, Jaime remains absent for the Lannister side, leaving his secret mission to remain as pure speculation for now. Hmmm…

Anyway, the episode begins with Arya becoming frustrated with doing menial housework in the House of Black and White. Jaqen H’Ghar’s mysterious training methods begin to wear on Arya, with the waif tormenting her and seeming to resent her all the while. The mystery of the House of Black and White is very well set up, and leads into a nicely poignant scene of Arya having to forsake her former identity by dropping all of her things into the nearby lake. She can’t bring herself to give up her trusty sword, Needle however, which she instead buries in some nearby rocks. Will Jaqen find out? Probably, given his seemingly supernatural methods, but it’s nonetheless cool to see that Arya isn’t going to throw away her entire arc from former seasons.

As for Sansa, Littlefinger takes her over to none other than Winterfell, which has been greatly rebuilt and renovated by the Boltons after it was burned down earlier in the series. Littlefinger gives Sansa the opportunity to help seek revenge for her family, by marrying Ramsay Bolton, who, along with his father, is still having fun flaying people, and generally being an even bigger bastard than most of Westeros’ powerful folks. Littlefinger’s speech to Sansa about being on the sidelines, and getting the chance to take an active role by marrying Ramsay was pretty powerful, as were the scenes of Theon trying to avoid being noticed by Sansa as she wanders about town. It’s nicely ironic that two incognito former citizens of Winterfell find themselves back in Winterfell after drastically separate circumstances. Likewise is a housemaid recognizing Sansa immediately, and reminding her that the North remembers. What, you mean the dyed hair and nothing else wasn’t a perfect disguise? The hell, you say! 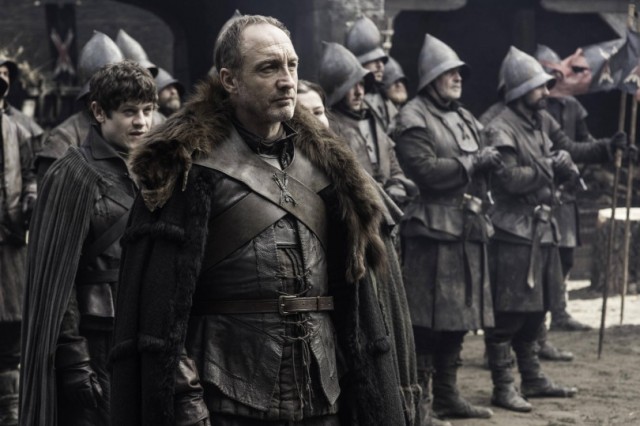 On one last note with Sansa, it’s very evident that the Boltons are vulnerable, and that should serve as a big turn for Season Five. Their hold on the North is weakening, and it seems like Littlefinger and Sansa may be the ones to oust their grip. I don’t know how they’ll do this, but that seems to be where the series is headed. Does Sansa have it in her though? Hopefully. Like Littlefinger says, it’s about time that she stepped up and didn’t sit on the sidelines!

Yet again though, it was Jon that really stole the show this episode. Now appointed Lord Commander, Jon is left to face Stannis, who takes his winning the position of Lord Commander surprisingly well, particularly when Jon explains his reasoning for turning down the claim to Winterfell. Stannis does remind Jon that his father was killed by the same stubborn honour (conveniently failing to mention that support of Stannis also led to that outcome), but that’s about it for a reprisal. Could be worse.

When it comes time for Jon to exercise his first commands however, Jon surprisingly makes Alliser Thorne his First Ranger, with a humourous fake-out taking place beforehand, which would have viewers believe that he will force the man to build a toilet. Jon’s honour predictably didn’t fail him, and it will be interesting to see if said honour is indeed turned against him later, especially when Jon must inevitably convince the Night’s Watch to ally with the Wildlings for the coming Winter. 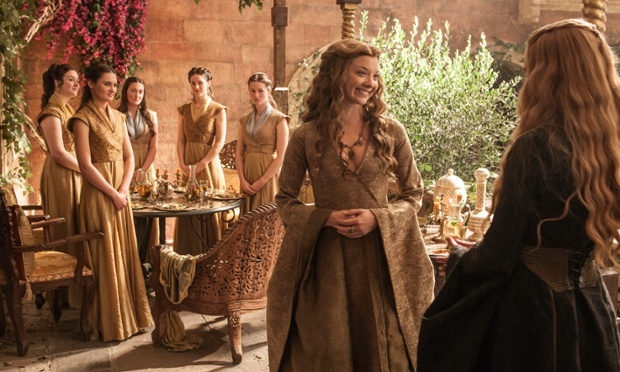 In fact, the only man to defy Jon as he’s giving orders is Janos Slynt, whom Jon tries to assign somewhere else, with Janos spitting on his command. Jon then tells the Watch to take Janos outside, and holds his sword before him, asking Janos if he has any last words. Janos pleads for mercy, telling Jon that he’s a coward and he’s always been a coward, but he will now obey Jon without question. Jon responds by lopping off the guy’s head before the Watch. Yeah, the baby-killing bastard no doubt had a good decapitation coming, but it was awesome to see Jon balance charisma and respect with the Night’s Watch. He should make a fine Lord Commander indeed!

As for the Lannisters, Cersei gets to watch Tommen’s coronation, with Tommen getting liberal opportunity to enjoy his new bride in all of the best respects. It’s crazy how rare a successful marriage and consummation is for Westeros, eh? Margaery gossiping about her new horny husband to her friends afterward was equally amusing, just in time for Cersei to interrupt and pledge herself to the new queen. That’s probably a good idea. Cersei has no obligation to stay in King’s Landing anymore, and the last thing she should want to do is motivate the new queen to kick her overbearing ass back to Casterly Rock, especially considering how Joffrey turned out under her watch.

Oh, and if you’ve been following along with Telltale’s episodic Game of Thrones game, this episode actually appeared to show Mira Forrester and Sera Flowers in the background amongst Margaery’s friends, which is the first time that the show has acknowledged the supposedly in-canon game. What a cool Easter Egg! I guess this would indicate that Mira and Sera will survive the events of the game, and still be in service to Margaery for Season Five of the show, or so it would appear. It may just be an Easter Egg, but it’s cool nonetheless!

But, Cersei is Cersei, and she’s at the ready to exploit King’s Landing religious leader, the High Septon being caught with some prostitutes. After Cersei throws the man into the Red Keep’s dungeons, she approaches the High Sparrow, the peacekeeping bishop of sorts, who directly tends to the poor and sick, and even gave away his own shoes to someone who needed them more. Surely, this guy isn’t the type to plot and scheme, but Cersei is nothing if not a good manipulator. It will be very intriguing to see if and how she can twist this blatantly good man into something darker.

The episode then wound down with a short jaunt to Essos, but merely from the perspective of Tyrion and Varys. After Tyrion goes stir-crazy in his transport, the two wander about a bit, and, naturally, visit a whorehouse. It’s not much use to Varys, but Tyrion is certainly ready to have fun!

To his surprise though, Tyrion is unable to get it up for his chosen whore, still clearly suffering after having to strangle the woman he loved to death at the end of last season. He instead decides to drink some more and piss off of a balcony, just in time for none other than Jorah of all folks to kidnap him and say that he’s taking him to meet the queen. The episode then ends there. Obviously, it’s quite the irony that Tyrion is being forcibly kidnapped in order to be taken to the place that he’s going anyway, unless something else is going on with Jorah beyond the obvious. Given that Jorah is still clearly carrying a torch for Daenerys though, it would seem unlikely that he’d mean any other queen beyond the Mother of Dragons. 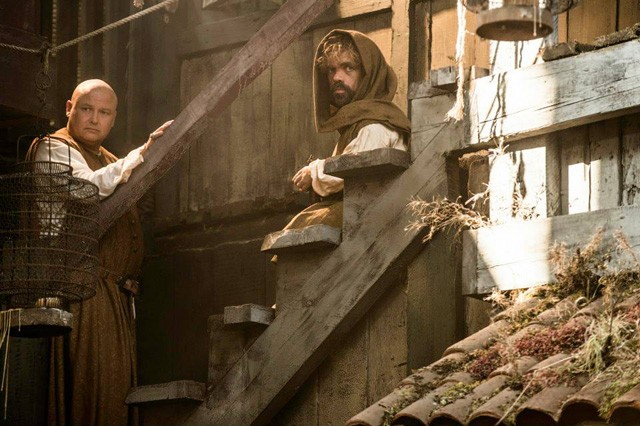 “High Sparrow” served up a fantastic helping of high-quality storylines on all sides for Game of Thrones, even if Daenerys was entirely absent this week. Still, it was great to focus on catching up with the core characters beyond Daenerys, even if Bran’s and Jaime’s current actions remain a mystery. Cersei in particular has found an interesting new use for her dark talents, now that Joffrey, Tywin and her husband are all dead. Faith seemed to be a big theme this week, just as the corruption of faith is sure to define a huge part of Season Five to come.

Game of Thrones 5.3: "High Sparrow" Review
Game of Thrones shifted focus purely on its core houses this week, with Stark and Lannister stories abound. This resulted in a satisfying and immensely intriguing episode that continues to set up outstanding plot arcs for the season!
THE GOOD STUFF
THE NOT-SO-GOOD STUFF
2015-04-27
93%Overall Score
Reader Rating: (0 Votes)
0%