iZombie largely returned Blaine to the background this week, even if it did find some of his influence nicely tapped into with the case-of-the-week in “Maternity Liv.” For the most part though, this episode was all about Liv and the drawbacks of being a zombie, again, though thankfully, Liv’s latest brain, and the case built around it, remained interesting stuff.

When a young mother stumbles into a campsite and dies shortly thereafter, her baby is taken into hospital custody, with the Seattle Police forming a task force to figure out what was behind the young woman’s death. This inadvertently leads to a scandal, after an outspoken reporter accuses the Seattle PD of prioritizing the young, privileged white woman’s death, over the numerous disappearances that have taken place around Blaine’s hunting grounds.

This was actually a clever way to make Blaine a focus this week, without Blaine actually being in the episode. We know that Babineaux’s lieutenant is an undercover zombie, and getting the squeeze put on him was interesting to see, even if it ended up being Babineaux taking the heat for it. This is particularly true after Major inadvertently puts the reporter on Babineaux’s trail, leading to a rather damning quote in the newspaper that only makes things worse.

Poor Babineaux. He’s such a good cop, and yet, he always seems to end up on the worst possible end of events.

On a bit of a side note too, regarding the Seattle Police Department, it was hilarious to see this episode finally address the show’s gaping plot hole of people easily being able to walk in and out of the morgue. Apparently, the card reader is broken, and the department refuses to get it fixed, despite Liv hounding them to do it. Ravi then gets annoyed when the maintenance department says that they aren’t worried about the dead bodies walking away, stating that the true problem is the living dead getting in and stealing brains. It was a clever way to acknowledge a nagging problem, and make it feel strangely clever and fitting for the series.

Anyway, this week, it was Ravi and Liv’s family that seemed to suffer the brunt of Liv eating the brain of the victim. Liv ends up gaining the victim’s fierce newborn maternal instinct, leading to her constantly doting over Ravi and her little brother, as well as obsessing over what happens to the baby, now that his mother is dead. The episode initially seems to set up an arc where Liv buys into the public opinion that the victim’s deadbeat boyfriend is the killer, but it seems to sweep this under the rug rather quickly, especially when it soon becomes evident that someone else is behind the killing. 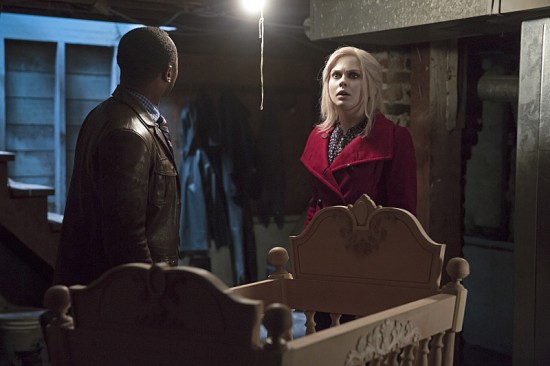 In fact, for all of its reliable fun and cleverness, two things that iZombie has never been wanting for at this point, the whole family dynamic with Liv and the victim’s parents was the one thing that felt a bit undercooked. They were the one element of the story that felt a bit heterogenous with the rest of the case, being more about Liv’s brain leading her to a side distraction that felt like it resolved itself too cleanly. She claims to have a higher appreciation for her own family at the end of the episode, though given the minimal role that Eva and Evan have played on the series at this point, we’ll see if this ends up being true, especially with Liv encouraging Evan to get a job, not knowing that Eva is having him apply at Blaine’s butcher shop.

In any case, the perpetrator behind this case was a real doozy, being a female Animal Control officer who had her own twisted boyfriend that Liv saw in her visions, until another vision identified a female killer, despite Liv initially pushing for the investigation of male Animal Control officers. It was an effective red herring, even if the woman came off as a little too obviously guilty during her interrogation with Liv and Babineaux, or was that just me?

Anyway, the episode’s climax was surprisingly action-packed for iZombie standards, having the killer couple engage in a full-blown gun fight with the Seattle Police, including Liv and Babineaux, though the lieutenant runs ahead and kills the two perps, while Liv frees the other captive victims, after Babineaux’s lieutenant goes, “Full-on Zombie Mode.” Even when the woman surrenders, the lieutenant guns her down. On that note, the lieutenant remarking on Liv’s shooting injury not generating blood, which she passes off as a tree branch cut, seemed to subtly imply that the lieutenant may be aware of Liv’s true nature, unlike Babineaux.

Apparently, the kidnapping was due to the couple exercising a self-made fanatical religion that called for kidnapping and sacrificing young girls. That was quite the idea for some perps-of-the-week. Still, given the implication that Babineaux’s lieutenant clearly lied about shooting the woman in cold blood when she was surrendering, who knows if some of this information is outright fabricated. It was a darker resolution than the show is used to when it comes to catching the bad guys, but one that worked well.

After that mess, it initially seemed like the boyfriend was going to steal the baby, and exploit the story for personal gain, before Liv tears him a new one, maternal instinct in force. This leads to the boyfriend handing the baby to the victim’s parents, as Liv watches in the hospital, right as the maternal instinct begins to leave her. Like I said, it was a bit too clean of a resolution, considering that this was basically the very next scene after the boyfriend’s selfish plans, but it was still kind of heartwarming to watch.

Oh, and on one last note, Lowell did show up again this week, though he apparently consumed a brain that made him temporarily gay, so it just led to some jokes with Liv’s own brain, and one somewhat sweet scene at Liv’s home. Likewise, Major continued to snoop around, discovering the brain that the Candyman was about to eat, before being arrested and thrown in a holding cell. After the Seattle PD learns of Major apparently screwing Babineaux over with the reporter, they also throw in some thugs with him. Geez, Major, haven’t you learned yet that curiosity killed the cat?!

“Maternity Liv” didn’t come together quite as effectively as “Virtual Reality Bites” last week, but it was still a good episode nonetheless. The show has done a fine job of keeping the entertainment value high, while also remembering to invent smart and persistent seasonal arcs that it draws just enough attention to, without overriding the case-of-the-week format. It’s just further proof that iZombie is one of the best surprise successes of the midseason TV lineup!

iZombie 1.7: "Maternity Liv" Review
iZombie put greater focus on Liv's brain-eating side effects this week, after she inherits the maternal instinct of a dead young mother's brain, leading to another good case that could have used a less clean resolution.
THE GOOD STUFF
THE NOT-SO-GOOD STUFF
2015-04-29
85%Overall Score
Reader Rating: (0 Votes)
0%