The Big Bang Theory has enjoyed a mostly successful eighth season, especially after the rather bumpy Season Seven that came previously. If there’s one thing that the show hasn’t really touched upon however, to a surprising extent, it’s the engagement of Leonard and Penny. It turns out, this has been somewhat intentional, as the two are dragging their feet with actually planning their wedding, and that came into focus in “The Commitment Determination”, the show’s eighth season finale.

After Sheldon upsets Amy by asking her if he should watch The Flash on TV while kissing her (spoiler: Yes, everyone should!), she storms out. Oh yeah, Amy’s back, finally! Confused, Sheldon asks Leonard and Penny for help, who try to illustrate what went wrong for him. This ends up backfiring however, when Sheldon rightfully calls the both of them out on their own commitment issues, namely by not setting a wedding date. 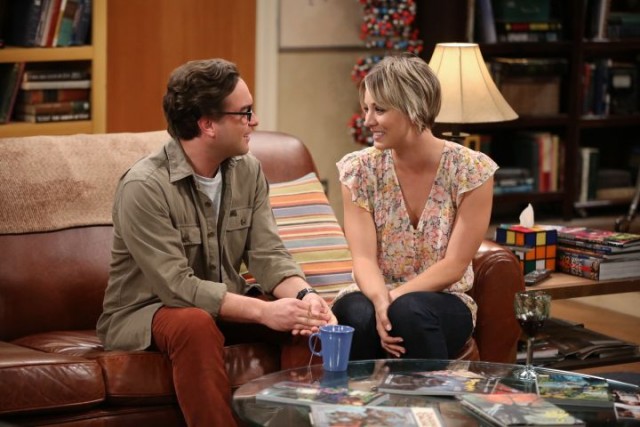 This leads to Leonard and Penny arguing, naturally, which delivers some solid jokes. That’s refreshing, since the Leonard/Penny spats have long outlived their appeal by Season Eight, so it’s good to see one that’s actually done to good effect, especially with Sheldon lingering around with his commentary to keep the laughs coming at a solid rate.

Relationships in general took center stage in this season finale for everyone, even in the subplots. Raj debates whether he should break up with Emily, as the episode sports a similar conflict with Howard and Bernadette, who initially mock Raj for being a wimp with low self-esteem, only for Raj to turn the tables and say that they can’t throw stones, since they’re afraid of throwing out the equally pathetic Stuart, who has become a bother to live with.

Not only was this an emotionally-charged season finale for The Big Bang Theory, but one could even say that it’s a surprisingly grim one. The show continually shifts focus between its romantically struggling leads, each being presented with a different difficult situation. While Howard and Bernadette debate how to kick out Stuart, and Raj debates how to break up with Emily, Sheldon remains confused about Amy, and Leonard and Penny start facing their wedding hesitations head-on. It’s a pretty big shift from the show’s usual light-hearted comedy, and it brings the lead characters’ lives into focus in a great way for the end of the season.

It’s Leonard and Penny that really end up pushing the main plot forward, when they hatch a questionable plot to get a quickie wedding in Las Vegas, away from their friends. This initially seems exciting, but the episode did a great job of having the excitement gradually wear away, to expose the true nervousness of Leonard and Penny finally pledging their lives to one another.

This came to a very surprising head when Leonard confesses to Penny that he briefly cheated on her during his brief absence in Season Seven. The reveal that Penny stayed 100% faithful to Leonard was very satisfying juxtaposition, since it would have been way too easy to make Penny the one that slipped. I’m glad that the writers didn’t take that low-hanging fruit, and called attention to Penny’s increased maturity in a very clever way, with Penny forced to forgive Leonard for a very unlikely straying. Despite this however, it had the two left with an uncertain outcome, marching toward a union that neither was sure that they were ready for. It was a pretty heavy place to leave these two characters on for the end of the season, but a heavy place that was intelligent and well-handled, even if a little abrupt.

As for the separate plights of Raj, Howard and Bernadette, all of them end up wimping out of their desire to remove the problem person from their life. When Emily suspects that Raj is breaking up with her, he immediately backpedals out of doing it, and then professes his love to her, awkwardly kissing her afterward. Yikes… Likewise, Howard and Bernadette have their latest nuisance with Stuart quickly remedied, especially after Stuart picks up Howard’s favourite cereal, and the two find themselves unable to evict their house guest, simply staring at him in frustration as he’s clearly there to stay. No big shake-ups here, though it will be interesting to see how these events play out in Season Nine, as the repressed issues continue to bubble up to the surface with Stuart and Emily, even if Raj was also left hanging in an awkward spot, much like Leonard and Penny were.

Perhaps the heaviest outcome however rested with Sheldon, after Amy tells him over Skype that she needs time to evaluate her place with him, and whether she wants to continue the relationship. Well, you had to imagine that the woman’s patience would run out eventually, since it’s now been over half a decade since she started dating Sheldon, and subsequently putting up with his issues. It was a tough turn of events, but even more heartbreaking was Sheldon solemnly turning to a collectible Gollum statue from Lord of the Rings, then saying that Gollum is an expert on rings, so what should Sheldon do with the ring he got Amy.

Yes, you didn’t mis-read that. Sheldon wasn’t just creating problems for their own sake with Leonard and Penny, as much as he appeared to be boasting about that. He had secretly bought an engagement ring, and was soon planning to propose to Amy. The episode ends with Sheldon staring at the engagement ring, unsure of what to do with it now, and it was the most tragic moment in a season finale that was full of surprising tragedy, especially for a light-hearted comedy like The Big Bang Theory. 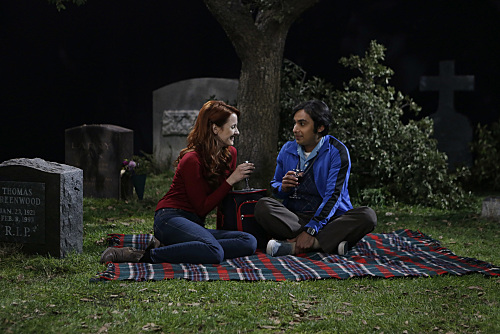 Still, these plot arcs are sure to sort themselves out in Season Nine, for better or for worse. For now, we have our leads all in tight spots as the wait for Season Nine begins, and it will be both interesting and painful to ponder where they go next. Still, I have to tip my hat to The Big Bang Theory in its eighth season finale, since it wonderfully demonstrated that these characters are still well worth caring about here.

The Big Bang Theory 8.24: "The Commitment Determination" Review
The Big Bang Theory presented a surprisingly grim eighth season finale, with every lead getting a blunt and challenging examination of their personal lives, including an especially big tragedy for Sheldon and Amy.
THE GOOD STUFF
THE NOT-SO-GOOD STUFF
2015-05-08
90%Overall Score
Reader Rating: (0 Votes)
0%