After the strange stumble that Brooklyn Nine-Nine suffered with “Det. Dave Majors” last week, the show got back on track with “The Chopper”, an episode that made for a strong lead-in to next week’s season finale.

The main plot of the episode involves Peralta getting a multiple murder case over $21 million, with full support from Madeline Wuntch. Believing that Wuntch’s support has to come with a bad catch, Holt volunteers to come along with the apprehension of the suspect, trying to deduce just what exactly Wuntch is up to.

As usual, it’s hilarious to experience the banter between Andre Braugher and Kyra Sedgewick here. This double act has proven to be one of the humour highlights of Season Two, and I’m glad to see that it still hasn’t lost steam, even as the season is starting to wind down.

Equally reliable is Peralta inevitably grating on Holt’s nerves with his desire to embrace the action movie-style ‘fun’ of the case. Naturally, Holt is wholly professional, as Boyle eggs on Peralta and his antics, which creates some pretty solid jokes overall. Best of the lot however is when Peralta finally successfully talks Holt into going along with the fun, after inspiring enough confidence in him to defy the dark cloud of Wuntch. Holt declaring that his old call sign of, “Wet Blanket” should be abandoned in favour of, “Velvet Thunder” has to be one of Holt’s funniest moments all season, and that’s saying a lot!

Holt and Peralta continue to be a more effective team than they have any right to be as well, eventually discovering the true perpetrator, after Peralta gets approval from Wuntch to fly a helicopter onto the scene, hence the episode’s title. After the operation proves to be an incredible success, with all of the money reclaimed and accounted for, Wuntch goes to congratulate Holt, seemingly genuinely… Until revealing that her plot was in fact to have Holt succeed, so she can promote him out of the Nine-Nine, and stick him in a lousy PR desk job. Devious! 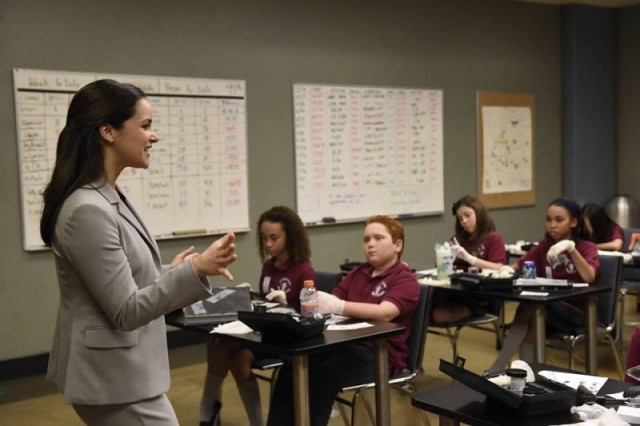 Not only does this set up a pretty solid storyline for next week’s season finale, which will inevitably deal with the precinct reacting to Holt having to leave, but it also proved to be a very satisfying resolution to the story. It was a very crafty plan by Wuntch, and one that didn’t involve any strange 180’s like in “The Mole” earlier in the season. Rather than feeling childish, Wuntch came off as genuinely ruthless here, and that was great to see!

Over on the B-plot’s end, the result was still reasonably good, even if some jokes worked better than others. Jeffords ends up hosting a field trip for a prestigious private school that he’s trying to get his young daughters into, with Santiago, Diaz and Gina all nosing in in varying ways. After Jeffords gets his private meeting with the teacher in charge of the class, Santiago tries and fails to entertain them, with Gina trying to sort out the social drama between some of the young girls off-screen. From there, Diaz successfully talks Santiago into showing pictures of crime scene murders to excite the kids, which Jeffords and the teacher return to in horror.

Initially, Jeffords seems like he’s out of consideration, though he manages to chase down the teacher, and successfully explain the actions of Santiago, with Santiago’s shaky help. Surprisingly, it’s Gina that gets Jeffords’ biggest save however, when she reveals that she fixed the drama that the teacher was helpless to do anything about. In the end, Diaz got Jeffords and Santiago both what they wanted, and her blunt claim that she is always right all the time, and everyone should listen to her, was pretty funny. 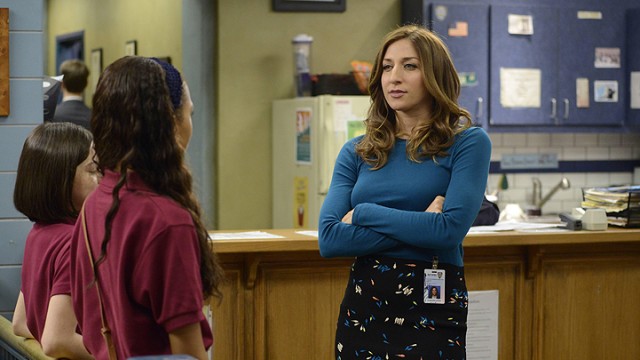 “The Chopper” was a solid episode that was definitely a sharp improvement over “Det. Dave Majors” from last week. It largely felt like it was laying a foundation for the season finale most of all, but that’s fine, since the episode was plenty funny, and most of the jokes worked to great effect. The plot of Wuntch was the best part though, and it should put Holt in a very interesting position as the season wraps up next week!

Brooklyn Nine-Nine 2.22: "The Chopper" Review
Brooklyn Nine-Nine found its footing again with a solid lead-in to its season finale next week, presenting well-written plots with consistently funny jokes, along with the threat that the precinct may be losing one of its best personalities.
THE GOOD STUFF
THE NOT-SO-GOOD STUFF
2015-05-12
85%Overall Score
Reader Rating: (0 Votes)
0%