After slipping out of a planned 2014 release to try for this year, Ubisoft has now broken the bad news that their ambitious real-world MMORPG, The Division won’t arrive this year either. It’s now planned for the first quarter of 2016.

This will likely prove frustrating to people who have awaited the newest Tom Clancy-branded game IP from Ubisoft since its initial announcement in 2013. It was originally planned to be exclusive to PlayStation 4 and Xbox One at that time, though has since expanded to include a PC release, which likely contributed to the initial delay out of 2014. It would seem that the delay out of 2015 might simply be due to quality assurance reasons, particularly after Ubisoft got burned pretty badly for rushing Assassin’s Creed: Unity and Far Cry 4 out the door for Q4 2014, both of which had highly publicized launch issues, especially Assassin’s Creed: Unity.

Fortunately, it wasn’t all bad news from Ubisoft, beyond their high-profile announcement of Assassin’s Creed: Syndicate today. Ubisoft also revealed that an all-new unannounced game is being planned for this fiscal year (i.e. before the end of March 2016), and it’s a triple-A game. It will likely be announced at this year’s E3, if we had to guess. Ubisoft was mum on whether it was an all-new IP, or a sequel to another IP however. Might this be the rumoured Watch Dogs 2, especially with Ubisoft Montreal handing the development reins of Assassin’s Creed over to Ubisoft Quebec? Or, even if it’s a real long shot at this point, might it be Beyond Good & Evil 2? We’ll likely have to wait for E3 to find out.

Regardless, Ubisoft CEO, Yves Guillemot, after confirming the latest delay of The Division, also confirmed that another Tom Clancy-branded game, the highly anticipated Rainbow Six: Siege, will launch before the end of 2015. It’s probable that Rainbow Six: Siege could have swapped places with The Division covertly in Ubisoft’s release schedule, after Rainbow Six: Siege no doubt went along smoother in development. 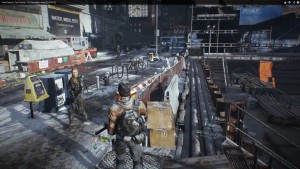 Lastly, Guillemot bluntly stated that all future Ubisoft games would be made exclusively for the current generation of consoles, and that, with the exception of Just Dance, the company is officially abandoning the last-gen Xbox 360, PlayStation 3 and Wii. Development seems to be prioritized for the PlayStation 4 and Xbox One with any given game, though Ubisoft was mum about their current stance on the Wii U, which is still part of the current generation of consoles, or whether they may have any games brewing for Nintendo’s next-gen platform, the NX, which Nintendo recently (and predictably) confirmed that they wouldn’t be discussing at all at E3 this year.

Keep scavenging Eggplante for all news and updates on The Division, and other high-profile Ubisoft game projects.