We’ve hit the halfway point of Game of Thrones’ fifth season with “Kill the Boy”, a decent episode that largely suffered from a plodding pace. Many people have criticized the current season of Game of Thrones for being a bit slow, and sadly, “Kill the Boy” is probably the worst offender for that. It went over some solid character moments, but the episode really could have done with being less dull.

Things begin over in Meereen, with Grey Worm waking up as Daenerys and co. react to the death of Ser Barristan last week. Grey Worm is met by Missandei, and confesses that he was afraid after being stabbed in the battle with the Sons of the Harpy, and is ashamed of that, though not of death. He reveals in a very sweet moment that he was afraid of never seeing Missandei again if he were to die, leading to the two sharing a somewhat awkward, but very heartfelt kiss. It was the only bit we got with Grey Worm this week, but it was definitely one of the episode’s better moments. 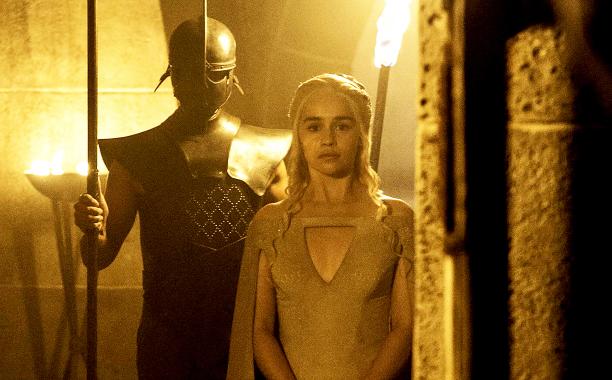 Meanwhile, Daenerys deliberates the response to the attack by the Sons of the Harpy at the end of last week’s episode. Recounting the advice of Barristan, along with the current advice of Daario, she gathers the leaders of each big family, which includes one of her most loyal servants, Hizdahr, and decides to put fear into them by introducing them to her dragons. The two dragons immolate and eat one of the leaders, while the rest are thrown in prison.

Later however, Missandei inspires Daenerys to look for the solutions that only she can see, which later leads to her freeing Hizdahr, and confessing that she was wrong to doubt him. She then presents quite the earth-shattering proposal, literally, as she claims that the best way to unite the new ways and the old, is that she marry Hizdahr. Oh, but at least he gets his wish to have the fighting pits re-opened however (albeit only for free men, not slaves), while he kneels in a cell, thoroughly confused. Something tells me that this ‘marriage’ is not going to go as planned though, given Daenerys’ current reputation in Meereen.

Over in Westeros, the episode firmly pushed the Lannisters to the sidelines for the most part, not even bothering to touch on King’s Landing or Dorne this week, which might have contributed to the episode’s somewhat dull final product. We got plenty of time with Jon, Sansa and Ramsay, as all of them talk about the future of the North, and Jon continues to go on about how Winter is coming. Yeah, yeah, we get it already. There’s a reason why so many people mock Jon’s character for continually spouting this increasingly inane phrase, and it seems like the writers were actively trying to see how many times they could get away with Jon saying, “Winter is coming” this episode. 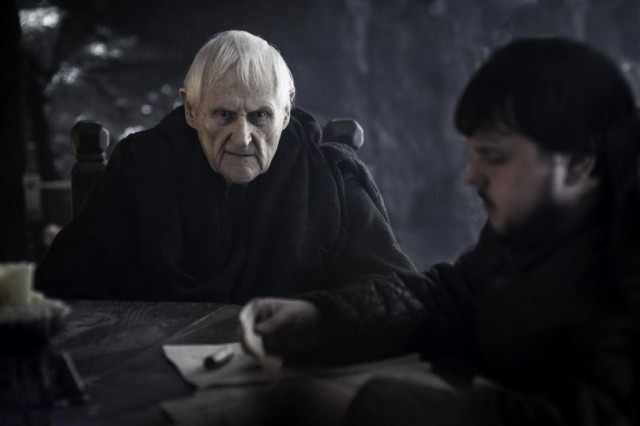 Anyway, Jon decides that it’s time to ally the Night’s Watch with the Wildlings, a move that has the support of Aemon. Naturally, when Jon makes the announcement to the Watch, it’s received very negatively for the most part. Jon announces that he will travel with the new Wildling leader, Tormund Giantsbane to seek an audience with the other free men, in preparation for the coming Winter, and the inevitable attack of the White Walkers.

It kind of felt like the show was going in circles here, despite all of its positive momentum with Jon’s character over the course of the season so far. We already know that the Night’s Watch doesn’t want to work with the Wildlings, and Jon is already struggling with having to ally with the tribes that killed his late friends at The Wall. Hammering that in all the more didn’t help this episode’s problematic pacing. Likewise, Sam continuing to be prodded about the weaknesses of the White Walkers inevitably led nowhere, presenting no new information. Even the talk between Sam and Gilly about Sam’s origins before joining the Night’s Watch felt uninteresting, and like a bit of a re-tread of facts viewers already put together. It’s too bad that the scenes at The Wall were overall very boring this week.

The only slightly interesting bit was Stannis announcing that he’s going to march toward Winterfell while Jon is away, and take his wife and daughter with him, since he doesn’t feel that they are safe with the Night’s Watch. Uhhh… why? Yes, Stannis’ march against Winterfell and the Boltons was inevitable, as we’ve established, but why now? More importantly, why is Stannis suddenly concerned that his family isn’t safe now? This felt a bit contrived, honestly, and like the show needed to find any sort of excuse to get Stannis moving.

Over at Winterfell, we got scenes with both Ramsay and Sansa, with Ramsay telling his lover, Myranda that he’s set to marry Sansa. There was some effective tension in this scene, but again, it didn’t amount to much. Likewise, Sansa getting told to light a candle in the highest tower if she’s in trouble felt like a waste of time, re-treading what was already established.

Far better executed was a great scene with Sansa and Ramsay, where Ramsay forces the broken Theon, whom Sansa was earlier led to in a dog kennel, to apologize for murdering Sansa’s brothers. This was actually a far better scene that made for the best bit in the North. Even the subsequent scene where Ramsay learns that his father is expecting another child with his actual wife felt like it left too little of an impact, even with Stannis about to march on Winterfell. Any drama that this scene could have created was swept under the rug, when Roose assures Ramsay that his claim isn’t being threatened at all. Sure, that could be a lie, but it doesn’t change the fact that the episode brought up this huge development, then did nothing with it.

Things wind down with Tyrion and Jorah, who mercifully provide the episode’s only action scene after they sail into the domain of the Stone Men. This is a very effectively tense battle, especially given that both men must avoid being directly touched, lest they contract Greyscale. Jorah manages to fight them off, even as Tyrion is dropped into the water and falls unconscious. He later awakens on the shore to find that Jorah rescued him, and that he’s Greyscale-free. Jorah however wanders off, showing that he was touched and sustained Greyscale, right as the episode ends. That was a pretty solid twist to cap off a great action scene. 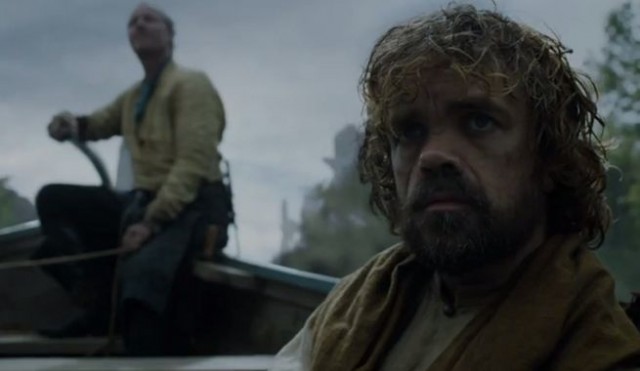 Still, Game of Thrones just annoyingly spun its wheels this week for the most part. Given that this show has ten-episode seasons, it really can’t afford to do that. The Daenerys material was ok, as was the action bit with Tyrion and Jorah, but those simply book-ended a whole lot of tedious filler with the Stark family. Even big developments like Stannis marching on Winterfell, Jon trying to rally the Wildlings and Roose conceiving a new child just didn’t hit with any impact, since so much of this episode was executed in such a lethargic, plodding fashion. That’s not like you, Game of Thrones.

All we can hope is that next week, the show finds its engaging pacing again.

Game of Thrones 5.5: "Kill the Boy" Review
Game of Thrones annoyingly spun its wheels in a rare example of a filler episode this week, having good Daenerys and Tyrion/Jorah material as bookends, but plodding along with a lot of tedious Stark/Bolton filler too.
THE GOOD STUFF
THE NOT-SO-GOOD STUFF
2015-05-12
73%Overall Score
Reader Rating: (0 Votes)
0%