NOTE: Full spoilers for this episode of iZombie, including a character death, are present in this review

After last week’s highlight episode, iZombie delivered another big winner with “Patriot Brains” this week. The character drama overrode the case-of-the-week a bit this week, but it still amounted to another smash hit episode for what’s continuing to prove a huge success for The CW’s line of comic book dramas.

“Patriot Brains” picks up immediately where “Dead Air” left off from last week. Liv scuttles away from Blaine, troubled by the knowledge that Lowell is taking advantage of his, “Zombie Meals on Wheels program”, as she puts it. She then gets thrown right into another case, where a decorated military sniper is found dead on a paintball range. Kicker is, the guy was apparently shot from an impossible perch, or had to be fifteen feet tall.

It’s an interesting setup for a case, particularly after Liv eats the victim’s brain, and gains both killer instinct and PTSD. The PTSD doesn’t really amount to much, strangely, but Liv’s killer instinct does lead into a pretty big development later on.

Said development comes when she reconciles with Lowell, who owns up to being a coward that was afraid to ask questions about the brains and visions behind Blaine’s operation. After sharing a heartfelt moment with Liv, Liv learns more about what goes into Blaine’s actual business plan, and she comes to a rather startling conclusion; Blaine has to die, and she has to kill him.

This would seem like a natural development, and with Liv having consumed the brain of a trained killer, there would seem to be no better time than now. Unfortunately, she finds herself unable to pull the trigger of her victim’s sniper rifle when Lowell gets Blaine into the open, confessing to Lowell that she’s unable to take someone’s life. Lowell then signs to her that he loves her, before trying to take out Blaine himself, and getting a bullet to the head for it. Undead Lowell is now fully dead.

Despite its charming and almost goofy nature, iZombie has never struggled to hammer home the finality and sadness of death, and Lowell’s death was executed wonderfully. Seeing the tears well up in Liv’s eyes as she realizes that she can’t kill Blaine, even with a killer’s brain in her, was a pretty powerful moment. Likewise, seeing her having to suppress a wail of despair when she sees that her actions led to Lowell’s death, albeit indirectly, was equally powerful. Right as Liv found another shot at love, it was snatched away from her because of a weak moment. That’s pretty harsh, and it’s no doubt something that will come up again later in the season.

As for the rest of the case, Liv and Babineaux do some digging, and it seems quite quick that they deduce that the killer used a drone to fire at the victim from the air. It’s also the likely suspect, the new husband of the victim’s ex-wife, who endured a grief-stricken, PTSD-fueled home invasion from the victim. The case was wrapped up pretty neatly this week, even if it was still another inspired, creative case.

Beyond the case and character drama with Liv, Major inevitably keeps pushing with the investigation into Blaine’s work, running afoul of one of Blaine’s meathead zombie lackies. After the guy breaks into Major’s home and attempts to torture him for information, Major unloads a few bullets into the guy, then calls Babineaux in a fit of desperation. Babineaux comes home to find the perp gone, and no evidence of the attack. He then suspects that Major is having some sort of psychotic breakdown, and that’s where Major is left.

Major’s almost had an even rougher time than Liv over the course of this show’s debut season! Poor guy can’t seem to catch a break, ever. I guess nobody told him to go for the head, but even so, it will be interesting to see how Major’s future is affected by his inability to give up his investigation into Blaine.

Oh, and if you’re curious about Ravi getting bitten by the zombie rat at the end of last week’s episode, turns out that the zombie infection can’t be spread between species, so Ravi is A-ok. That’s good to know, even if it was a bit odd that the show would bring up this development with Ravi, and then promptly drop it. 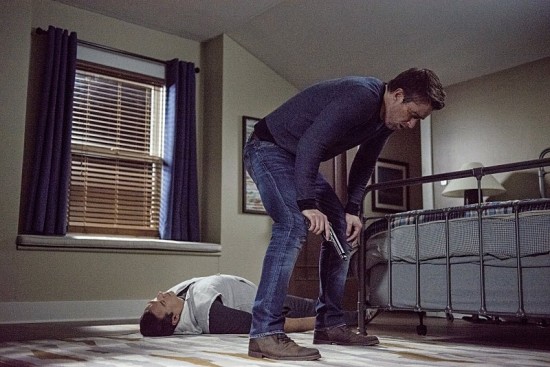 In any case, iZombie delivered another superb episode this week, even if it was the drama that stood strongest over the actual case-of-the-week. The loss of Lowell was pretty heartfelt for both Liv and audiences, and Major continues to be put through the ringer in a pretty powerful way. The consequences of Liv’s inability to kill Blaine will likely be felt soon, as it still seems like there are more zombies than ever popping up in Seattle now…