NOTE: Full spoilers for the Season Two finale of Agents of S.H.I.E.L.D., including multiple major character deaths, are present in this review

Agents of S.H.I.E.L.D. went all out with its season finale this week, boasting a massive two-hour runtime in “S.O.S.” Thankfully, the episode didn’t disappoint at all, with the show capping off its superb second season on a fantastic note, nicely concluding the battle against Jiaying and the Inhumans, and laying a strong foundation for the now-confirmed Season Three.

This show has come a very long way since its shakier first season began in 2013, and never was that more apparent than here. This season finale felt nothing short of epic, as full-scale war erupts between S.H.I.E.L.D. and Jiaying’s small faction of Inhumans, in turn also putting Skye in the unenviable position of having to choose between her biological family and her adopted family. 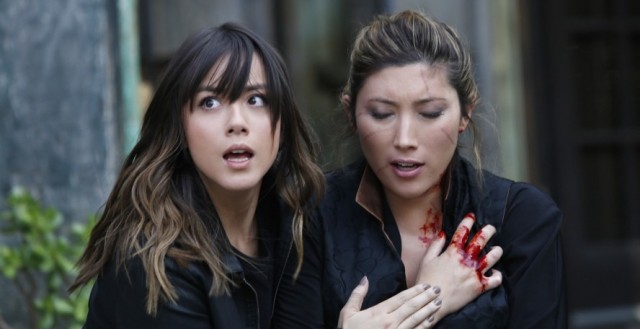 As Jiaying’s actions see Afterlife torn apart, and its citizens evacuated to some unknown spot, Skye is forced to subdue May, after she, along with the other Inhumans, truly believe S.H.I.E.L.D. to be responsible for the attack. At the same time, Coulson’s crew sees that Bobbi has gone missing, with Weaver urging an aggressive response to the Inhumans’ treachery, even as Coulson’s team suspects that something else is going on. After all, even Coulson is in agreement with Weaver that Gonzalez wouldn’t be stupid enough to incite a full-scale battle against an entire race of people with powers.

As chaos erupts on all sides, Coulson’s group eventually manages to piece together what really happened, namely how Jiaying faked the attack on the Inhumans as an excuse to eradicate S.H.I.E.L.D., meaning that the Inhumans have the situation backwards. This comes right at the moment of Skye believing that S.H.I.E.L.D. betrayed her as well, after Jiaying seemingly successfully talks her into joining the cause, forsaking Raina’s warnings.

Nonetheless, Raina goes to confront Jiaying, telling her that she knows about the plot, since she saw how everything ended. She speaks about how Skye will be the one to lead both the Inhumans and S.H.I.E.L.D. to a better tomorrow, with Jiaying simply being a threat. Jiaying then responds by saying that no one will believe that, before stabbing Raina in the neck and killing her. This might be a shock to some, though if one has been keeping up with the development of comic-based TV shows, it’s less surprising, since Ruth Negga recently took a lead role on AMC’s upcoming Preacher series. Clearly, Raina wasn’t going to survive past Season Two. 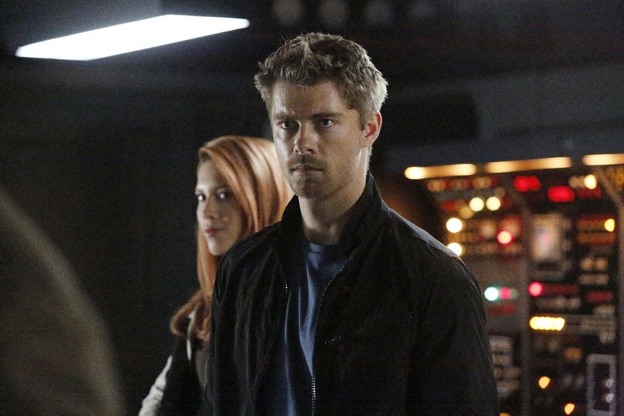 Skye witnesses her mother murdering Raina right as she’s about to pledge herself to the cause, ending up captured after she speaks out against Jiaying’s plans. This comes when Gordon takes a squad of Inhumans to take over Gonzalez’s base, while Coulson learns that Jiaying’s, “Peace offering” is naturally not what it seems. After talking with Cal in confinement, Coulson learns that he has been sent to kill as many S.H.I.E.L.D. agents as possible by Jiaying, before Coulson stresses Cal out to the point of cardiac arrest, after Simmons points out that Cal’s rudimentary super-strength formula has taken a massive toll on his health and sanity.

After a miracle shot of adrenaline that revives Cal however, his formula becomes complete, and Cal finally fully completes his transformation into Marvel villain, Mister Hyde. After trashing the lab and fully going berserk, Hyde makes a big mess, and is actually pretty scary to behold. Kyle Maclachlan had his best turn yet in this season finale in fact, even if his Mister Hyde had some pretty goofy lines. Yeah, I know, he’s crazy, but he sure went full-blown cuckoo in some pretty colourful ways, given that the rest of this episode was pretty intense and heavy.

Eventually, Coulson manages to trap Hyde, talking him down to the point of encouraging him to help S.H.I.E.L.D. set things right. Turns out, Hyde is aware that his wife has gone bad, and decides that it’s time to save some lives. It’s a strangely redeemable moment for a character that has been pretty unstable and murderous throughout this entire season, and was ripping everything apart just a couple of scenes ago, but it leads to a satisfying turnout later. 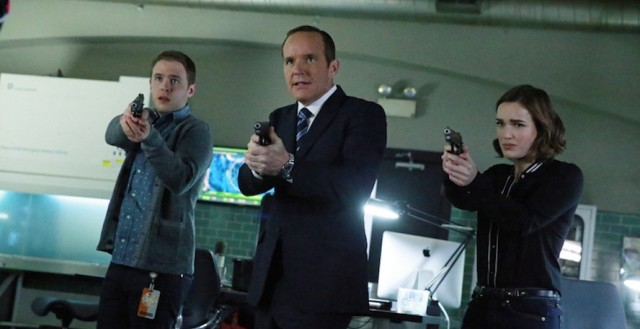 While this is going on, we learn that Agent 33 being captured by HYDRA was the direct result of Bobbi giving up a S.H.I.E.L.D. safehouse that Agent 33 was then holed up in, in order to maintain her cover from earlier in the season. Ward tries to force Bobbi to apologize, even going as far as torture, though Bobbi manages to get the upper hand. She attacks both Agent 33 and Ward, but is unfortunately subdued, tied up again with a gun pointed at the door, just as Hunter is put on her trail, alongside May, who points out Bobbi’s whereabouts after confirming that she didn’t leave with Bobbi, as the surveillance footage appeared to indicate.

May has a pretty ingenious idea, telling the (fallen) S.H.I.E.L.D. agents over a radio to converge on a location, and not let their guard down until they see her face. This leads to Ward appearing to sneak around a corner and shoot May to death, only to reveal that “May” was in fact the disguised Agent 33. This was a pretty hard moment for Ward, naturally, though it’s also his just desserts too. Serves him right for becoming a violent psychopath in the name of love.

Hunter manages to save Bobbi, as Bobbi leans over to take the bullet for him, prompting him and May to rush Bobbi back, and just barely save her life. This is apparently what was supposed to lead into the since-stalled Agents of S.H.I.E.L.D. spin-off, particularly after Bobbi utters to Hunter that she’s, “Done” with Coulson’s crew, though this will probably be swept under the rug when Season Three starts, since ABC has already confirmed that Adrienne Palicki and Nick Blood will continue to be part of the Agents of S.H.I.E.L.D. cast next season. 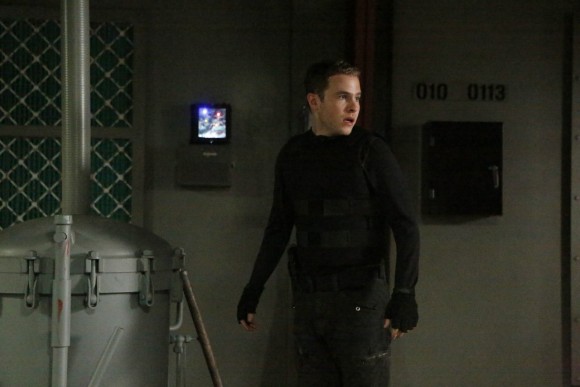 Before all of that business though, we get a pretty exciting big final battle in Gonzalez’s frigate, with Gordon and Jiaying taking the entirety of Gonzalez’s crew hostage, and threatening to dose them with Terrigen Mist. They’ll forcibly take the survivors, with the rest naturally dying. Jiaying also plans to goad S.H.I.E.L.D.’s other branches into a trap, though Coulson manages to warn them away when the true nature of Jiaying’s plan is tipped off to them by Skye, who is eventually freed by Lincoln, after seeing Jiaying’s plan for what it really is.

With Mack also teaming up with Skye and Lincoln, and May, Fitz and Coulson providing support, complete with a way to stop Gordon’s teleporting, the group tries to stop Jiaying, which includes fighting some of her Inhuman lackies, namely a woman who can copy herself into multiple assailants, a la X-Men mutant, Multiple Man. This leads to some more pretty awesome action scenes, culminating with Skye pursuing Jiaying outside as she prepares to transport a box of deadly Terrigen Crystals. Skye sinks the Quinjet carrying the crystals, but is seemingly about to be killed when her mother starts to drain the life from her, demonstrating the true depth of her Inhuman powers. All seems lost, until Cal is forced to crush Jiaying’s spine, killing her in order to fulfill the vow he made to protect his daughter.

This was the great turnout I mentioned, and it hit home more than the death of Agent 33 did. Cal having to kill the wife he went to such great lengths to restore was truly heartbreaking, even if it did earn him Skye’s forgiveness.

Another final battle was had between Fitz, Coulson and Mack, who manage to trap Gordon in one area, disabling his teleportation powers with an invention by Fitz. After the group manage to engage him for a bit, it’s Fitz that manages to land the fatal blow, stabbing Gordon with a pipe and killing him. At this point, a Terrigen Crystal flies out of Gordon’s hand, which Coulson grabs and clutches. As his arm begins to turn, Mack cuts it off! Yep, it’s another hand-removal Easter Egg in reference to the famous Star Wars scene, which Marvel Studios president, Kevin Feige admitted to slipping into every Phase Two Marvel Cinematic Universe movie after The Avengers. Iron Man 3, Thor: The Dark World, Captain America: The Winter Soldier, Guardians of the Galaxy, and Avengers: Age of Ultron all had a moment involving a hand or arm loss. I guess this means that Agents of S.H.I.E.L.D. is being considered part of the MCU team by the higher-ups now, in its own special way. 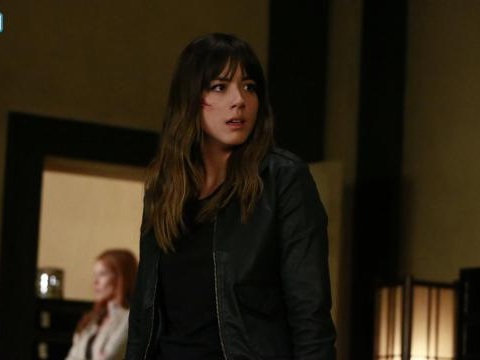 In any case, Skye puts Cal through the T.A.H.I.T.I. program without his knowledge, erasing his memory of the years since meeting Jiaying, which also includes removing his memory of his daughter. Skye visits in his new life, where he’s a happy and well-liked vet. Aww, that’s sweet. Again, considering that this guy was a mass murderer throughout most of his appearances, it’s undeniably heartwarming to see him find a happy ending, even when he believed it wouldn’t be possible. This really seems like the best thing for Cal, and as much as I love Kyle Maclachlan’s highlight turns throughout Season Two, I think this is a good ending to his story, if this is where the show intends to leave him.

The idea of Skye teaming up with Coulson to build a new S.H.I.E.L.D. force of powered people is also quite interesting, and could present a cool new direction for Season Three. Skye being able to drive Lola is also a nicely symbolic way to set up a new leadership role for her at S.H.I.E.L.D. Looks like we’ll have lots to look forward to, especially when it’s shown that the Terrigen Crystals ended up leaking into the ocean, in turn contaminating the fish, which affects fish-related foods and oils and other such sundries, likely mutating and potentially endangering people across the world. Looks like the MCU is going to be welcoming a lot more powered people very soon, continuing to suggest that Marvel is going to be using the Inhumans as the MCU stand-in for the X-Men series’ mutant epidemic, given that the X-Men screen rights likely won’t be leaving the clutches of 20th Century Fox anytime soon. 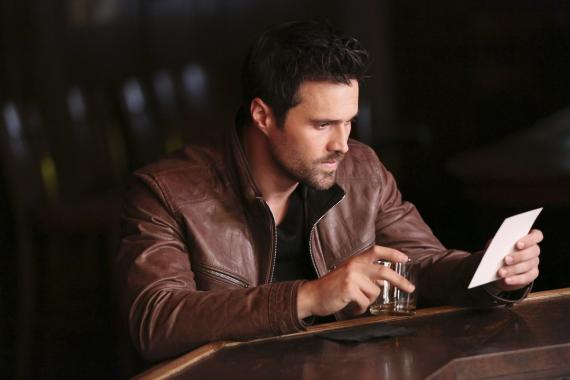 Separately, as Ward grieves in a bar, he amasses some names from the scattered HYDRA forces, then tells them to find more, because he’s tired of flying solo. Yes, Ward is going to rebuild the shattered remnants of HYDRA, no doubt setting up another very promising new arc for Season Three. It looks like he’s embracing full-blown villainy now, along with giving HYDRA the expected new lease on life that they’re no doubt consistently going to get, even in the MCU.

Finally, the epilogue sequence of this enormous season finale involves Fitz and Simmons finally arranging a date with each other, with Fitz going to find dinner options as Simmons continues to study the mysterious anti-Inhuman weapon. While adjusting it however, it gets out just long enough to gobble up Simmons! The episode then ends there. Is Simmons dead?! Probably not, but given her hate-boner for powered people this season, it would be very interesting poetic justice to have her get spat back out with powers in Season Three, and forced to join Skye’s crew of powered folks. 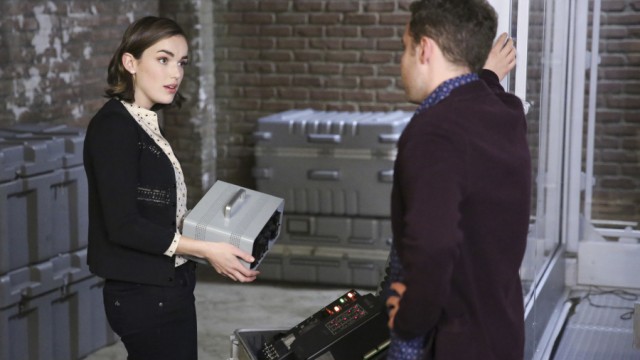 “S.O.S.” was an excellent way to end such a great second season for Agents of S.H.I.E.L.D. Its two-hour runtime was utilized superbly, delivering a large-scale and satisfying conclusion to the season that nicely wrapped up each ongoing story event, while laying out tons of promise for Season Three. This Marvel series may have come from shaky beginnings, but it’s finally officially standing as an offering worthy of the MCU. I definitely can’t wait to see what next season has in store!