As we speculated, along with most of the internet, the much-touted Bethesda announcement about the Fallout series has led to the first official reveal of the long-awaited Fallout 4. Bethesda has released a first-look trailer at the game, along with confirmation that we’ll be seeing more of it, including gameplay, during their all-new E3 keynote on Sunday, June 14th. 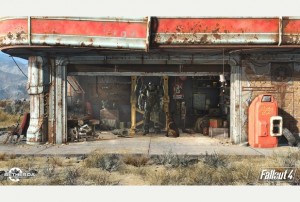 This officially puts all of the rampant speculation about the game’s location to bed, with Bethesda confirming that it does indeed take place in Boston, as rumoured. The game will unfold within a fictional post-apocalyptic society called The Commonwealth, which was referenced during certain side missions in Fallout 3. In that game, The Commonwealth is described as a den of violence and despair. Hey, what isn’t in the post-apocalyptic wasteland of the Fallout series?

Well, more specifically, a fictional scientific firm called The Institute (supposedly modeled after the real-life MIT) has created a bunch of androids that are now running wild there. Apparently, there is also an organization called The Railroad that wants to rescue said androids as well, along with a branch of the police in charge of capturing the androids that escaped from The Institute. Looks like players and their custom characters will have more than just scavengers and mutants to deal with this time around!

Some may feel that the timing of the Fallout 4 announcement is odd, given that Bethesda is hosting their first-ever E3 press conference in a couple of weeks, where the announcement would have made more sense. Given how many rumours and supposed leaks have occurred around the game however, with the rumour of its setting at least being correct, it’s probable that Bethesda wished to announce the game early, to avoid a seemingly inevitable leak that would have spoiled the big reveal, had it been in their conference.

Regardless, it should come as no surprise that Fallout 4 is coming to PC, PlayStation 4 and Xbox One, and is definitely skipping the last-gen Xbox 360 and PlayStation 3, along with Nintendo’s lesser-powered Wii U, which Bethesda already confirmed that they won’t be making any games for at this point. Pre-order incentives don’t seem to be clear yet, though it’s likely that we’ll hear more about that at E3 soon.

Keep radiating Eggplante for all news and updates on Fallout 4, and other big developments from Bethesda.