Pre-E3 leaks are sadly an inevitable thing, but it’s not often that a developer’s direct slip-up results in the cat being let out of the bag early. Nintendo appears to have suffered from Tecmo Koei not getting the memo however, as the Dynasty Warriors developer has accidentally been caught uploading a Japanese trailer for an unannounced 3DS port of the Wii U’s surprise hit Legend of Zelda spin-off, Hyrule Warriors! Nintendo now appears to have capitulated to the mistake, and has simply allowed game sites like IGN to stream the trailer directly. 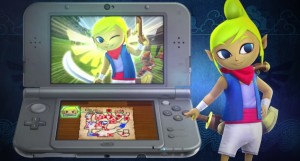 While not guaranteed that the announcement was to be made during Nintendo’s digital E3 keynote, which will take place at 9:00 A.M. PST/12:00 P.M. EST on Tuesday, June 16th, it seems likely that this is where Nintendo originally planned to reveal the port to the world. The Big N no doubt has several other surprises for both 3DS and Wii U up their sleeve for E3, so the accidental reveal of one game, and a handheld port at that, probably won’t derail their entire keynote by any means. Still, it’s a bit of an unfortunate, yet undeniably amusing boo-boo on the part of Tecmo Koei. Perhaps the Japanese developer underestimated the sleuthing skills of Western internet hounds, even when they initially tried to hide the trailer.

Regardless, the trailer shows off the basic idea of how Hyrule Warriors will function on 3DS/2DS handhelds. Players can switch characters on the fly using the Touch Screen, with the Touch Screen also showing a map during gameplay on the 3D Screen. Not only that, but the player can also enjoy the all-new additions of Tetra and the King of Red Lions as playable characters from The Legend of Zelda: The Wind Waker. Moreover, if you already own the Wii U version of Hyrule Warriors, and link it with the 3DS version, you can import Tetra and the King of Red Lions into your Wii U game as well!

Despite the preview showcasing Hyrule Warriors on a New 3DS XL, the Japanese box art later seems to indicate that it’s playable on any brand of 3DS/2DS handheld, rather amazingly, given that this is a handheld port of a Wii U game! The game also appears to come with the same DLC functionality as its Wii U counterpart, as indicated by the Nintendo Network logo on the 3DS box.

Obviously, Hyrule Warriors for 3DS has only been confirmed for Japan at this point, though given the worldwide popularity of Hyrule Warriors as one of 2014’s most beloved Wii U exclusives, it seems inevitable that it will shortly be announced for Western release as well. The game appears to be quite far along in development, and will likely drop before the end of the year, at least in Japan.

Keep slashing up Eggplante for all news and updates on Hyrule Warriors, and other high-profile Nintendo spin-offs.