Nintendo had a hell of a surprise in store for viewers of their Nintendo Treehouse pre-show at the Nintendo World Championships 2015! After a brief demonstration of a stage from upcoming Wii U game, Yoshi’s Woolly World, Earthbound creator, Shigesato Itoi interrupted the broadcast. Immediately afterward, he announced that Mother, the predecessor of cult Super NES RPG, Earthbound, which was never released outside of Japan, would be released on Wii U Virtual Console today in North America, as an out-of-nowhere surprise! Naturally, the game is fully translated into English for its release on the Wii U eShop in the West.

Dubbed Earthbound Beginnings for its Wii U Virtual Console debut, this marks the first time that Mother has been officially released outside of Japan, where it was made available on the Japanese equivalent of the NES, the Famicom. There were plans to localize Mother for the West on NES originally, with Nintendo even completing a prototype translation job for the game, though in the eleventh hour, Mother was halted from release in North America. Since then, a fan translation was made for unofficial ROM copies of Mother, which was previously unofficially dubbed by fans as ‘Earthbound Zero’.

Similar to Earthbound, Earthbound Beginnings takes place in the modern world, and unfolds as a quirky, tongue-in-cheek RPG about a group of young children taking on an alien invader. The game features turn-based combat, and incorporates the familiar PSI attacks from Earthbound as well. While the protagonist resembles Earthbound protagonist, Ness, he is actually a separate character known as ‘Ninten’, obviously a reference to the game maker itself, Nintendo.

Expect Earthbound Beginnings to go live on the Wii U eShop before the end of today. The price isn’t yet confirmed for Canada, though it will likely be around the neighbourhood of $4.99-$7.49 CDN, depending on whether Nintendo will be charging a premium in contrast to other Wii U Virtual Console releases from the NES library, as they did with Earthbound’s Wii U Virtual Console release. 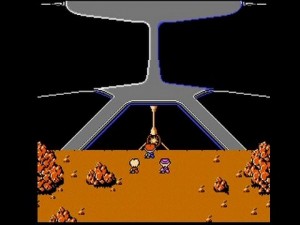 Coincidentally, Mother 3’s protagonist, Lucas also comes to Super Smash Bros. for Nintendo 3DS and Super Smash Bros. for Wii U today, as paid DLC. Mother 3 is still not available outside of Japan, where it released for the Game Boy Advance, though there’s now more hope than ever that the West may eventually see the game, now that we finally have the original title, cheap and accessible!

Keep invading Eggplante for all news and updates on Earthbound.