UPDATE: While it wasn’t mentioned during the Xbox keynote, Bandai Namco has confirmed in a European press release for Dark Souls III that it will be the final game in the Dark Souls series. This is no doubt bittersweet news for fans, though Dark Souls III will hopefully be the kind of final chapter that this acclaimed franchise deserves.

After several leaked promotional assets went public ahead of E3, Microsoft made the official announcement that Dark Souls III is real! Once again, the game will be developed by From Software, and published by Bandai Namco Games. 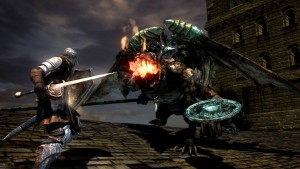 The game’s announcement was shown with a pre-rendered CG trailer, demonstrating a desolate landscape that has gnarled folks walking on sticks, seemingly heading towards a giant castle. As the familiar ominous tone of Dark Souls sets in, a large man with a giant cleaver is seen at the end of the preview, which then gives way to the logo. Dark Souls III was obviously only listed for Xbox One, seeing as this occurred during the Xbox media briefing, though sources also state that it will simultaneously release for PC and PlayStation 4.

The infamously punishing series of action-RPG’s from From Software has seen two highly successful previous installments, with Dark Souls II getting a next-gen upgrade on PlayStation 4 and Xbox One this past April, after initially debuting on Xbox 360, PlayStation 3 and PC in 2014. From Software is of course also riding high on the huge success of their recent PlayStation 4 exclusive, Bloodborne, which was made in a similar spirit as Dark Souls, right down to its high degree of challenge.

Dark Souls III is scheduled for release in early 2016. Keep braving Eggplante for all news and updates on the Dark Souls series.