NOTE: Full spoilers for the fifth season finale of Game of Thrones, including multiple major character deaths, are present in this review

Game of Thrones brought just about all of its many plot arcs of Season Five together into a grand and shocking season finale, rife with betrayal, deceit and brutality. Beyond some strangely glossed over character arcs from earlier in the season, this really felt like a great way to close out Season Five, and set the stage for a very exciting Season Six next year!

First, we begin with Stannis, after having to sacrifice his daughter in the name of appeasing the Lord of Light last week. With his wife hanging herself at the start of the season finale, and the rest of Stannis’ sellswords deserting him, Stannis prepares to march on Winterfell, as the snow begins to melt, seemingly with his Lord appeased. Oh, but shucks, because Stannis and his army are severely outnumbered by the forces of the Boltons. 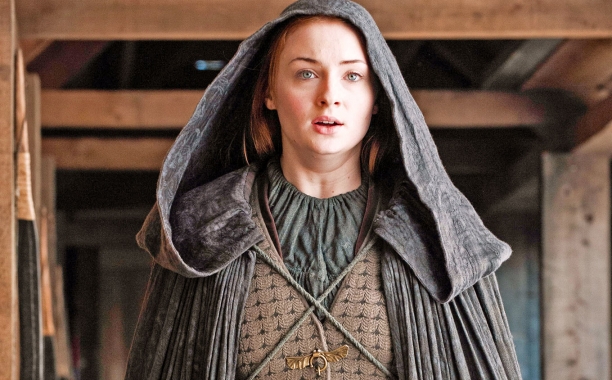 The battle that ensues is entirely skipped over, which is kind of frustrating, though a bit understandable, as this season finale has a lot to cover. Instead, we immediately fast-forward to Stannis’ forces being decimated, Melisandre abandoning them, and Ramsay finishing off some stragglers. We also get Stannis being met by Brienne, who noticed Sansa attempting to light the candle in the high tower again. Never mind that it got a poor old lady flayed the last time she tried that, but oh well.

Anyway, after fighting off some Bolton thugs, Brienne condemns Stannis to die not only for his murder of Renly, but also for his use of blood magic. Stannis doesn’t have any last words, and Brienne quickly finishes him off, making Stannis the first of several character deaths that occurred for the end of Season Five.

Obviously, this leaves Stannis’ sacrifices and determination from last week all going absolutely nowhere. It’s actually pretty effectively tragic. Stannis threw away his family, his standing, and the lives of his men… For what? A humiliating defeat? Hell, even Melisandre ditched him, and the whole sacrificing of Shireen and claims of victory were all her! Stannis is kind of pathetic in the end, which unfortunately only leaves the Boltons stronger than ever, going into Season Six.

Over in Wintefell proper, Sansa is threatened by Myranda, who is towing around Theon as well. After Sansa tries to defy Myranda however, Theon throws Myranda off of a high balcony, killing her on impact. Sure, Myranda was a more minor character, but her loss is bound to have some pretty bad consequences! This leaves Theon and Sansa holding hands and leaping off the side of the castle walls as Ramsay returns! Are they dead? Probably not, but I have to wonder how they made that kind of escape!

Over in Braavos (yep, we didn’t start in Braavos for once!), Arya exploits her knowledge of Ser Meryn Trant’s pedophilia to attack him as a Faceless Man. Seeing as Ser Meryn Trant was one of the first people on her list to kill, it was sickly satisfying to see Arya gouge out his eyes, stab him multiple times, and finally slit the bastard’s throat.

Ah, but, that wasn’t her mission, as Jaqen H’Ghar and The Waif quickly point out upon Arya’s return to the House of Black and White. Jaqen H’Ghar claims that a stolen death must be paid for with life, and drinks the lethal water from the House, seemingly killing him. Initially stricken with grief and anguish, Arya turns to see The Waif with Jaqen H’Ghar’s face, telling her that Jaqen is no one, and that’s who Arya should have aspired to be. As Arya continually pulls faces off of Jaqen’s ‘corpse’, she eventually finds her own lifeless visage, and it’s the last thing she sees before gradually losing her sight. What kind of implications does this have? Well, we’ll have to wait for Season Six it seems, namely for the knowledge of whether Arya simply becomes even more murderous, or starts to better follow the path of the Many-Faced God.

Over in Dorne, shock of shocks, something useful and interesting happens for the first time! As Jaime and Bronn prepare to take Myrcella and Trystane to King’s Landing, Ellaria and the Sand Snakes appear to be peaceful at last, with Jaime getting a chance to talk to Myrcella on the ship home. Myrcella reveals that she knows Jaime is her father, and is fine with it… Until she starts bleeding profusely from the nose and mouth, and collapses, seemingly dead. Yep, yet another shocking death for this season finale! Back in Dorne, Ellaria and the Sand Snakes simply smile at their good work, no doubt knowing that Dorne will have no choice but to go to war with King’s Landing now.

It’s wonderful to see Dorne finally do something that feels like it pushes the show forward, even if this development is just one giant tease for Season Six. Still, this season has been flirting with a war between King’s Landing and Dorne for seemingly its entire duration, so it’s good to see Dorne finally make itself useful, and just get on with it!

In King’s Landing itself, Cersei finally decides to confess to the High Septon, though lies about her relations with Lancel, and covers up her affair with Jaime. As penance, she has her golden locks of hair all cut off, and is forced to walk naked through the streets of King’s Landing, all the way from the Sparrows’ headquarters to the Red Keep. Along the way, Cersei is insulted, berated, has things thrown at her, and generally humiliated in seemingly unprecedented ways. You almost feel sorry for her as she is eventually broken down, desperately trying to hide her tears from the crowd. Cersei has never in the history of this entire series been this vulnerable, and it’s actually pretty impactful. Still, she does eventually make it back to the castle, where she’s covered up by Qyburn, and pledged to a new knight that vows to destroy her enemies, whom readers of the novels will recognize as Ser Robert Strong, even if the show doesn’t name him. This no doubt leaves her in plenty of a position to strike back at the Sparrows, with Tommen’s help, in Season Six.

This is where a bit of frustration sets in, since we don’t see what happened to Margaery, who, last we checked, is still rotting in the dungeons. That seems strangely sloppy on the part of an otherwise strong season finale. Likewise, other imperative characters like Littlefinger and Mace Tyrell are also glossed over, in relation to King’s Landing. It looks like we’ll just have to wait until Season Six to catch up with them.

Anyhow, over in Meereen, Tyrion, Jorah and Daario debate what to do about Daenerys going missing after the conclusion of last week’s episode. After Grey Worm is brought back by Missandei however, Jorah and Daario embark on an expedition to find Daenerys, leaving Tyrion, Grey Worm and Missandei in charge of the city. Tyrion then gets to reunite with Varys, who seems to re-forge a new alliance with Tyrion, with both men now properly pulling the strings in Meereen. Again, this isn’t a development we’ll see through until Season Six, which feels painful, though at least very exciting.

As for Daenerys herself, she finds Drogon tired and wounded, and ultimately unable to fly her back to Meereen. Stumbling away from her dragon, she’s eventually surrounded by the Dothraki of all folks, and this is where the season leaves her. Seriously?! If I’m being honest, the Daenerys appearance felt a little rushed, even if it was perfectly evident where she’s being left for Season Six.

Lastly, at The Wall, Ser Davos tries and fails to get Jon to send reinforcements to Stannis, though Melisandre returns, and seems to confirm Stannis’ defeat by the Boltons. Worse still is that Jon lets Sam, Gilly and Baby Sam go over to Oldtown, which was Jon’s idea in the books, though it’s Sam’s in the show, and Jon is initially against it. Still, it does make for a good way to get Sam on the path to becoming The Wall’s new Maester, especially with Maester Aemon passing away earlier in the season, whereas he accompanies Sam to Oldtown in the books.

Olyvar later tells Jon that one of the Wildlings returned with news of his Uncle Menjen, who went missing quite a long time ago in the history of this series. When Jon is led to the location however, he simply finds a sign that says, ‘Traitor’, and is surrounded by fellow members of the Night’s Watch, under the supervision of Ser Alliser Thorne, with each man taking turns stabbing Jon, and declaring, “For The Watch.” Even Olyvar takes part, with the episode and the season concluding with Jon’s bleeding-out corpse staring lifelessly into the sky, making the death of Jon Snow the most shocking and unexpected of all… At least, if you haven’t read the source novels. 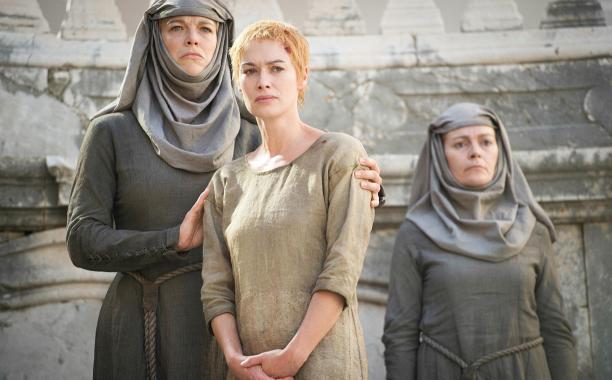 “Mother’s Mercy” felt like it had to rush through certain character arcs, with Sansa and Daenerys feeling like they were hurried off-screen the quickest. It’s also disappointing that characters like Margaery and Littlefinger are left up in the air for the end of the season, and that we never got any chance to check in with Bran, even if that was known in advance. Still, this was a pretty strong, if not quite perfect way to end Season Five of Game of Thrones. The characters are all left in intriguing new positions, and the balance of power appears to be shifting yet again, with Stannis wiped out, Cersei back at the Red Keep, and Dorne finally declaring war on Cersei, and by extension, King’s Landing at large, which is still dealing with its Sparrow problem to boot.

Some of the deaths were pretty harsh, and the death of Jon Snow stung hardest of all, but Game of Thrones ultimately took a more uneven fifth season, and brought it somewhere rewarding with the season finale, even if we’re still left waiting for next season to see how a lot of these new story arcs playing out.

Game of Thrones 5.10: "Mother's Mercy" Review
Game of Thrones' fifth season finale sometimes felt like it had to rush through certain story elements, namely Stannis' defeat and Sansa's great escape, but it still provided lots of shocking drama and compelling betrayal to cap off the season with.
THE GOOD STUFF
THE NOT-SO-GOOD STUFF
2015-06-15
88%Overall Score
Reader Rating: (0 Votes)
0%