UPDATE: Following the new Hitman game’s announcement at Sony’s E3 conference last night, Square Enix divulged more info about the game during their own E3 conference today, including the first look at actual gameplay design. Moreover, the game sounds like it is indeed simply being titled ‘Hitman’, and that it will re-tool the series to take place in a new open-world setting.

Hitman now allows players to pick and choose their mission structure, selecting their own targets, some of which are time-sensitive. If a high-profile target surfaces, players have a limited time to take out said target, before they disappear forever. As with Hitman: Absolution, it appears that players will be able to adopt any number of approaches to the gameplay, from stealth to a full frontal assault, though Hitman trademarks like the disguises will still be present.

Square Enix also confirmed that Contracts Mode is returning from Hitman: Absolution, allowing players to set up and execute custom missions, along with sharing them with friends as well. It’s presumed that the PlayStation 4-exclusive beta of Hitman will primarily showcase this mode, and how it works with the new, more open-ended design.

Finally, Square Enix confirmed that Hitman is launching sooner than you would think, and will come to PlayStation 4, Xbox One and PC simultaneously, on December 8th, 2015.

Agent 47 has found some new targets. Square Enix and IO Interactive announced an all-new Hitman game during Sony’s E3 conference tonight, which, at this point anyway, is simply titled ‘Hitman‘. It’s unknown whether this is the game’s final title, or is simply a placeholder title, on account of an official title not being decided yet. The latter is certainly more likely though, as this is clearly a sequel, not a reboot, with Agent 47 returning to his handlers for a new batch of missions.

The pre-rendered reveal trailer showed a montage of out-of-context violence and assassinations, as a hooded Agent 47 jogs through a freezing cold landscape. The game is billed as the most ambitious Hitman game ever, apparently taking players around the world on some of the most treacherous assassination contracts in the series’ history. 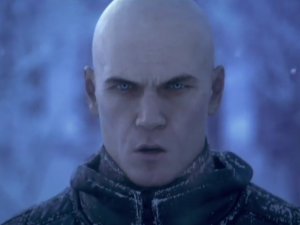 The previous entry in the Hitman series was 2012’s Hitman: Absolution, which released for PC, Xbox 360 and PlayStation 3, and featured less rigid stealth options, allowing less skilled players to adopt a more action-oriented approach to gameplay. Hitman: Absolution was very well-received, and it appears to have inspired at least some of this year’s new movie adaptation of the franchise, Hitman: Agent 47, which comes to theatres this August.

The sixth Hitman game will come packing exclusive perks on PlayStation 4 as well, though it is also in development for PC and Xbox One, with all three versions planned for release in 2016. An exclusive beta for the game will be hosted on PlayStation 4 only, awarded to anyone who pre-orders the game. Likewise, those who buy the new Hitman game for PlayStation 4 will score six unique contracts, which will be completely unavailable on PC and Xbox One for at least the first year of the game’s run.

Keep targeting Eggplante for all news and updates on the Hitman series.