During their E3 conference, Square Enix confirmed that, as suspected, the West will be getting the fifth Star Ocean game, after it was announced for Japan recently. Retaining the title of ‘Star Ocean: Integrity and Faithlessness‘ for North America and Europe, the game will launch outside of Japan in 2016, exclusively for PlayStation 4, with Japan getting it first, in 2015. Despite the series’ previous installment, Star Ocean: The Last Hope launching as a timed Xbox 360 exclusive, Star Ocean: Integrity and Faithlessness will unfortunately be skipping Xbox One. 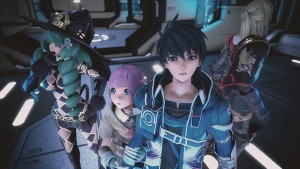 The planned PlayStation 3 port of Star Ocean: Integrity and Faithlessness that was announced for Japan is apparently not being released in the West, which may be disappointing to RPG fans who haven’t yet upgraded their console. In North America and Europe, you’ll have to pony up for a PlayStation 4 if you want to play the game, assuming you don’t already own one. This is likely because the PlayStation 4 has sold extremely well in Western territories, though has sold somewhat poorly in Japan at this point, hence why they’re getting a version of the game for PlayStation 3, a console with a far wider adoption rate in the Land of the Rising Sun for now.

Star Ocean: Integrity and Faithlessness takes place on an uncivilized planet called Fakelead, located approximately 6,000 light years away from Earth. The battle system will continue to be action-based and in real-time, with Tri-Ace once again developing, as with every Star Ocean title. Beyond that however, details are pretty thin for now.

Keep charting Eggplante for all news and updates on the Star Ocean series.