After nothing but virtually complete radio silence since the game’s formal announcement at Sony’s E3 2013 press conference, Square Enix finally showed off some new details for their long overdue action-RPG sequel, Kingdom Hearts III at their own E3 conference this year. Disney Japan and Square Enix made a preface video to a new Kingdom Hearts III trailer, where they confirmed that at least one of the all-new Disney worlds in the game would be inspired by Disney’s 2010 animated movie hit, Tangled! 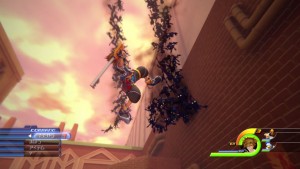 The game’s trailer unfolded in Japanese, and didn’t divulge much in the way of plot details. It did however show off familiar protagonists, Sora, Donald and Goofy, who sport new designs. The trio can also use some all-new team-up attacks by the look of the trailer, along with new attacks that use Disney theme park-inspired teacups and other such things, with the preview footage showing off plenty of action-RPG battles with the series’ familiar batch of shadowy villains, The Heartless. Sora was shown to be able to morph his trademark keyblade weapon into both dual pistols and a double-sided keyblade, with a new summon being revealed as Hercules’ Pegasus, allowing Sora to race around in a chariot and lay the hurt on enemies, one of which is confirmed to be the Rock Titan, also from Hercules. All events were punctuated by younger versions of key personalities from series prequel, Kingdom Hearts: Birth by Sleep, those being the rival keyblade masters, Eraqus and Xehanort, who discuss the all-important historic event of the series, the Keyblade War, during a game of chess.

Kingdom Hearts III still, rather frustratingly, has no release information for any region at present. The game is in development for PlayStation 4 and Xbox One, and is available for pre-order across numerous retailers in North America, despite the complete lack of a release window. 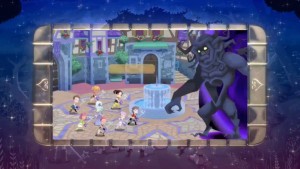 Keep unlocking Eggplante for all news and updates on the Kingdom Hearts series.