Square Enix had quite the surprise in store for fans of cult hit, NieR during their E3 press conference. Apparently, the game will be getting a sequel, and it will be developed by none other than PlatinumGames! Several slides of gorgeous artwork were shown, though the game is still too early in development to have any gameplay to demonstrate yet. 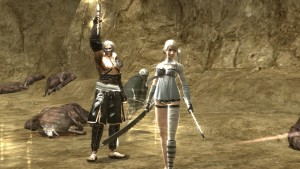 The untitled NieR follow-up was announced by the original game’s director, Yoko Taro, who will be directing the mystery sequel, and also reuniting with the original NieR’s producer, Yosuke Saito, and its composer, Keiichi Okabe for the new project. Apparently, the follow-up is exclusively coming to PlayStation 4, which is quite ironic, as PlatinumGames is also developing an Xbox One exclusive, Scalebound for Microsoft, and a Wii U exclusive, Star Fox Zero for Nintendo at present.

The original NieR released for Xbox 360 and PlayStation 3 in North America in 2010, where it launched with virtually no fanfare, and middling reception amongst critics, despite going on to be a cult hit with some gamers. In its native Japan, NieR actually released in two separate versions between platforms, with NieR Gestalt coming to Xbox 360 with an older lead character, and NieR Replicant releasing for PlayStation 3 with a younger lead character. NieR Gestalt was the only international build outside of Japan on both platforms. The game is an action-RPG with a unique blend of gaming genres, and is actually a spin-off of the Drakengard series, continuing on from the potential fifth ending of the original Drakengard. Unfortunately, NieR’s developer, Cavia ended up closing their doors after Yoko Taro ended up leaving the studio.

The NieR sequel has no release information at present. Keep standing by Eggplante for all news and updates on NieR.