If you’re at least in your twenties, then Freedom Planet is going to look very familiar to you. If you grew up with a Sega Genesis in particular, then Freedom Planet is going to be a big bundle of child-like happiness. Those with an affinity for a certain blue hedgehog will particularly love the game, as Freedom Planet wears its inspiration pretty proudly on its sleeve, ripping entire animations, MIDI composition style and stage design from the Sonic the Hedgehog games on the Sega Genesis. If there’s one thing that this game definitely isn’t afraid of, it’s Sega’s lawyers! 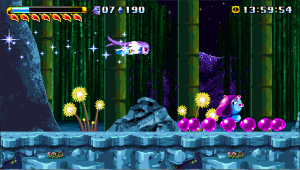 In all seriousness though, Freedom Planet is rightfully beloved. The game originally released for PC last year, coming to us from scattered indie studio, GalaxyTrail, where it’s available on Steam and GOG. It was met with positive reception, particularly by now-adult Sega kids, so it’s with a fair bit of excitement that Freedom Planet is making the leap to Wii U for its console debut, as strange as that sounds, considering that Nintendo was once the bitter rival of Sega.

The E3 demo for the upcoming Wii U version of Freedom Planet locked off most of the game’s suite of content, only consisting of the first stage, Dragon Valley, and limiting me to one of the playable characters from the PC version, that being anthropomorphic cat heroine, Carol. It may not be a large demo, but it definitely hit the finer points of why nostalgic gamers should be very excited for this port, especially since it seems to have made the jump to Wii U very well.

As I was shown the controls, I noticed quickly that Freedom Planet is both simple and flexible in terms of its control scheme. The demo allowed me to sample the lone stage using the default Wii U Gamepad controls, as well a Wii U Pro Controller scheme, and a Wii Classic Controller scheme. Between the three, the Wii U Pro Controller felt like the best and most natural way to play the game to me, though the other two control schemes are perfectly comfortable and satisfactory. The Wii U demo of Freedom Planet also sported off-TV play, which is sure to be a big advantage unique to the game’s upcoming Wii U release, with the Wii U Gamepad Screen showing a gameplay image that runs in perfect parity to the television. 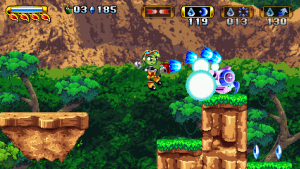 From the start of the demo proper, Freedom Planet immediately started feeling like a riff on Sonic the Hedgehog. The only noticeable difference is that you instead combine simple directional inputs with the Y Button to execute a small arsenal of attacks, including a mid-air spin, a downward kick, and an upward thrust. It feels a bit reminiscent of Rocket Knight Adventures, another beloved side-scroller on the Sega Genesis. The enemies also feel reminiscent of Rocket Knight Adventures, with spiny-shelled foes and flying armoured insects occasionally popping up to get in Carol’s way.

Beyond knocking around enemies with kicks and spins however, the movement that Carol enjoys is pure Sonic the Hedgehog goodness, right down to the loop-de-loops and background stretches that she dashes along. Miraculously, the game avoids feeling like a Sonic the Hedgehog clone though, having clever and interesting level design in its own right, along with the effective blend of the varied attacks that Carol has at her disposal, which all feel comfortable and sharp to work with using any of the available Wii U control schemes. On the note of the Sonic the Hedgehog nostalgia alone however, it’s wonderful that GalaxyTrail managed to replicate it so well, not to mention rather embarrassing for Sega. On the bright side though, I suppose if Sega isn’t interested in making real Sonic the Hedgehog games lately, it’s good that someone else is capable of it instead, even if they are undercover Sonic the Hedgehog games. 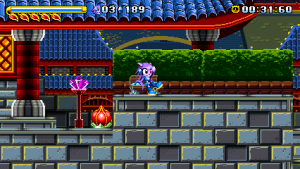 The demo’s climax appeared to unfold as I took on a burrowing snake-like enemy, whose segments had to be quickly spun off as it lept in and out of the ground. After every jump, it would peek up to spit fireballs at me, but all in all, it wasn’t a complicated boss. I dispatched the serpent in short order and continued on, only to soon after be met with the news that the demo was over, and to anticipate the Wii U release soon. Bummer.

My time with Freedom Planet was straightforward, but satisfying. Even being a Nintendo kid during virtually my entire childhood, the game hit a lot of very warm, satisfying notes in terms of my 16-bit nostalgia, and I can guarantee that it will do the same for most adult Wii U players that had even passing experiences with the likes of the Sega Genesis. This is a game that actually feels like it could stand in the league of those great classic Sega Genesis platformers, and more importantly, it gives us a rather blatant, unapologetic Sonic the Hedgehog spiritual successor that seems to be better than just about any movement in Sega’s flagship series in decades!

Best of all though is that Freedom Planet feels even more comforting and nostalgic on a console, which feels like this kind of game’s natural home, even if the PC version was already well-done. For Wii U owners looking to return to the days when Sega wasn’t a frequent laughingstock, Freedom Planet is definitely what the doctor ordered by the looks of this demo. Even if you’re looking to discover the best of the 16-bit Sega spirit for the first time though, this is one retro chic indie game that is very much welcome on Wii U.

Consider this port a marriage of good faith!