Virtual reality seems to be the biggest craze in video games today. A few years ago, 3D technology was huge, but quickly went the way of the HD-DVD and LaserDisc. We’re a lot more hopeful of this technology as it really does change the way games are played, and we’ve given Oculus’ Rift a go along with two very different games to test out the experience.

The first game we tried was EVE: Valkyrie, a multiplayer space-dogfighter set in the EVE universe. This is perhaps one of the best selling features of the Rift, or VR in general. 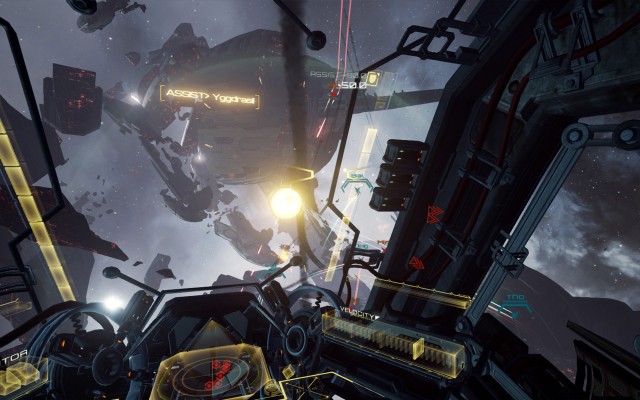 The game begins in a spaceship about to launch from its port right into a dogfight. Putting on the Rift and hopping into the game, looking around the world makes it easy to see just why VR is so great. You’re instantly transported into this cockpit. Look left or right and see massive guns on the side of your fighter about ten feet away. They feel like they’re right there.

Look up and see the controls mounted above you, or the yaw and pedals below you. Sway left and right, and notice the body you inhabit follow along. It is actually quite remarkable and difficult for your brain to separate the virtual from the reality.

Launching from the ship, you’re thrown into a dogfight, forced to tilt your head in every direction  just to get a better vantage point on your enemy. That scene in Top Gun where Goose and Maverick are trying to see behind them, practically snapping their necks to see above them and all around their plane? That can be you!

In all seriousness, the experience is enough to sell us on VR right now. Q1 2016 can’t come fast enough.

The other game we tried of the Rift’s nine experiences, was Edge of Nowhere, by Insomniac Games.

This one is a third-person action-adventure title built from the ground up for virtual reality systems. Insomniac describes it as a game where you “travel to the far reaches of the Antarctic mountains in search of a missing expedition team.”

Throughout the experience, Insomniac created moments that truly make VR shine. The game is an on-rails adventure, jumping across ice floes, climbing ladders up icy cliff faces, and outrunning aliens. These extraterrestrial beings is where the game takes off. Strategic positioning of the aliens made us squirm in a very real way.

Similar to Temple Run, aliens will sometimes chase you in the game, coming in from behind your character, and slowly moving so that they are right below your vantage point. Doing so makes it feel like the aliens are crawling all over you, and its viscerally real.

The game also sends you down pitch-black caverns and forces you to repel into the dark unknown, all while throwing out small glimpses of creatures designed to terrify you. They succeed.

The game ends with a tentacle-laden alien that, almost predictably, wraps it self around the display, ending the experience in a truly creepy way.

Oculus VR is doing a fantastic job publishing experiences that sell their technology like no other. At E3 this year, we also took a look at Sony’s Morpheus and we’re going to give our impressions of it as well as a comparison between the two in the coming days.

Expect VR to take the gaming world by storm assuming that pricing doesn’t make the technology totally unattainable for the average gamer. We’re also curious about the Xbox One compatibility of the headset, and can’t wait to know how Halo or Tomb Raider plays.