Some indie games are quiet, pensive and peaceful, introspective and calming with their sense of self-examination and tranquility. RIVE is not one of them.

A raucous, loud and triumphant combo of fast-paced platformer and bullet hell twin-stick shooter, RIVE feels like something of a marriage between Geometry Wars and Blaster Master, with a dash of Metroid Prime thrown in, and the results are a very satisfying adrenaline rush with a sharp sense of humour, and a whole lot of awesome spectacle. This kind of brilliant concoction also happens to be the brainchild of Netherlands-based developer, Two Tribes, formerly believed to be closing their doors, whom you might remember from Toki Tori and Swords & Soldiers fame.

More interesting however is that the Wii U version of RIVE is being considered the flagship console build of the game, despite PS4 and Xbox One versions also being in development. A Wii U version of a multiplatform game getting the highest billing is very rare, with the PS4 and Xbox One versions being outsourced to another developer, Abstraction Games, while Two Tribes is handling both the PC and Wii U versions of RIVE in-house. This Wii U preference could be because RIVE has been kicked around as a would-be DS game by Two Tribes since 2005, making its proper debut on consoles and PC come an entire decade late!

Fortunately, the wait appears to be worth it. After getting some time with RIVE’s E3 demo, being the Wii U version of course, I found the game to be simultaneously hilarious, engaging and nostalgic. It’s a fantastic blend of indie sensibilities that could very well be Two Tribes’ most entertaining and action-packed game to date! It’s also a game that handles remarkably well on the Wii U Gamepad, despite that being the only control option available for the demo. Off-TV play was also demonstrated, with the Wii U Gamepad Screen easily keeping parity with the events on the television. 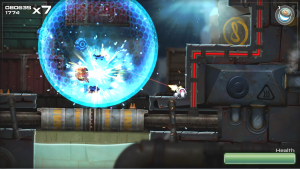 As the demo started, I was immediately thrust into a field of asteroids, using the right control stick and ZR Trigger to direct snappy, satisfying hails of bullets in order to keep floating space rocks away from my badass spider craft. Immediately, the demo hit the ground running with a sequence that was absolutely packed with spectacle! The physics and flash factor of the asteroids exploding and breaking apart in brilliant flashes of fire and plasma looked amazing, and the occasional witticisms of my hearty bearded protagonist, lamenting mis-placed space carriers and dire circumstances, carried with it an incredible sense of charm.

Things got even better when I got past the asteroid area, and was dropped into a space complex of sorts. From here my mechanical spider became a tank, albeit one that still had 360-degree shooting capabilities. I now used the ZL Trigger to jump, and then jump again (love the double jump!), which felt comfortable, even if a bit different from most other Wii U games. Enemies continued to swarm me as well, with flying robot drones closing in, ripe to be blown away by my relentless, unceasing gunfire. An ever-increasing score multiplier also kept me careful and focused as well, with the threat of losing my precious multiplier after a single hit harshly motivating me to stay focused on the onslaught of enemies! 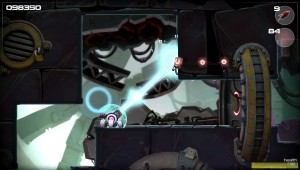 The demo was laid out in a pretty simple fashion, though things got mixed up a bit in a few places, namely with the noteworthy hacking mechanic. How this works is, you use the X Button to switch to ‘Hack Mode’, then aim a tracking beam with the right control stick, so that you point it at a hackable object. The basic applications were shown first, namely the ability to open doors by hacking a lock, though later, the Hack Mode was shown to have even more capabilities, such as taking control of an enemy drone to fly up to an inaccessible vent. It’s a simple, but very clever idea.

On a side note, I must also say that I really enjoyed the game’s synth soundtrack as well. The soundtrack is composed by Sonic Picnic, who also did the audio work for another of my particular favourite Wii U indies from E3, Typoman. The heart-pounding, arcade-style music makes the game feel all the more explosive and action-packed, and it makes the many intense combat encounters of the demo feel incredibly pulse-pounding and fun!

Don’t you worry about RIVE’s performance either, on the note of the action. Its Wii U build runs at a crisp 60fps virtually all the time, with minor stuttering in my demo playthrough, though that’s sure to be cleaned out in the final release. I hear that the PC, PS4 and Xbox One versions are going to run at a full 60fps clip as well, which is great news!

Periodically, I got placed against a miniboss as well, and this is where RIVE’s already great combat gets even better! One particularly nasty foe was shielded, a robotic monstrosity that spat out unending waves of drones from behind its barrier, preventing me from damaging it, and dividing my attention between a vulnerable shield generator, and keeping the drones off my back. It was a fantastic test of my reflexes and concentration, even if I had little trouble dispatching the threat, once I figured out how to get that shield down. I’m very much looking forward to the other bosses in the final release, if this enjoyable battle in the demo is any indication of their quality! I also chuckled quite a bit at my bearded hero hoping to get some answers from the boss encounter, only to be left with none, and hoping he’ll get some in the final game. In a cheesy way, it really helped up the immersion, and make me feel like I was actually in that badass spider tank, laying waste to legions of foes, despite being completely beard-less in real life!

My time with RIVE came to an end as my spider tank found its way to an objective, and as much as the demo felt like it spanned a satisfying length, it ended far too soon for me. I had a ton of fun with RIVE, which looks like it’s shaping up excellently. It’s a perfect mix of action, strategy, platforming and puzzle-solving in its E3 demo, and the smooth, fast-paced gameplay blends with that to create something that absolutely tickles my primal gamer desires. The game’s Wii U build also seems like it’s coming together excellently, despite being limited to Wii U Gamepad controls in my demo playthrough, with Nintendo’s build of RIVE boasting full 60fps, crisp, native 1080p resolution, and a whole lot of fantastic, detailed and explosive art design, both in terms of the models and the dynamic effects. I’d be surprised if the PS4, Xbox One or PC versions were any kind of a leap over what’s already very good work on Wii U!

I wasn’t left with much in the way of answers regarding RIVE’s storyline, a curiosity I share with my bearded, quick-triggered friend in the tank, though I was told that the game will have a mission-based structure. Whether there’s much bearing on the story or not in the final game though, RIVE has completely sold me on its gameplay alone, and stands as yet another of my favourite indie games that I went hands-on with out of E3!