The gaming industry sure loves to promote the current remaster craze, where games made for Xbox 360 and PlayStation 3 are given resolution boosts and DLC bundles on the next-gen PlayStation 4 and Xbox One. Despite being quick re-releases of games that could potentially be just a couple of years old however, these remasters get a lot of fanfare… Unless they’re the Prototype games, apparently.

Call it Christmas in July, but Activision has been quietly developing next-gen remasters for both the original Prototype, and its sequel, Prototype 2. Both are bundled together, and both were given a surprise release today on the digital channels of both the PlayStation 4 and Xbox One. Dubbed the Prototype Biohazard Bundle, the PlayStation 4 and Xbox One ports of the two games feature slightly upgraded visual resolution, as well as boosted framerates in contrast to their Xbox 360 and PlayStation 3 predecessors. For now, the games must be bought together, though Activision has confirmed that they will be split and sold separately on August 11th.

Prototype is an open-world action-adventure game where players take control of Alex Mercer, a man infected by a deadly pathogen that grants him violent and visceral shape-shifting abilities. Players run, leap and glide around the city of New York at breakneck speeds, trying to piece together a conspiracy, and stop those responsible for Alex’s gruesome transformation. In Prototype 2, gameplay is similar, though players instead control a new protagonist, James Heller, who is granted the same shapeshifting abilities, and now hunts the original game’s protagonist, Alex Mercer, blaming him for the murder of his family. 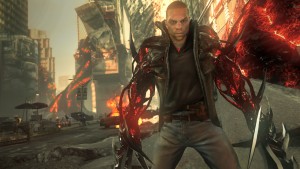 It’s interesting that Activision would bother remastering the Prototype games, as they blamed Prototype 2 for the severe downsizing of the series’ developer, Vancouver-based Radical Entertainment, due to the game’s underwhelming sales. Still, reception to both games was mostly positive, albeit inferior to Sony’s competing PlayStation 3-exclusive inFamous games that released around the same time as both offerings. The most likely reason for these remasters however is that Activision could be gauging potentially renewed interest in a Prototype 3, particularly since Sony has brought their similarly-themed inFamous games to the PlayStation 4 quite successfully.

The Prototype Biohazard Bundle is available for $49.99. It’s presumed that each separate Prototype remaster will later sell for $24.99 in August.

Keep shifting to Eggplante for all news and updates on Prototype.