It should come as no surprise that Amy Schumer and Judd Apatow are a match made in comedy Heaven. Both raw and earnest in their comedic personalities, the two were eventually drawn together by a mutual desire to work with each other, and the result of this comedy union is Trainwreck, a movie written by Schumer, and directed by Apatow.

Schumer has appeared every so often on television, but is mostly known for her outstanding acclaim in the stand-up comedy circuit. She also delivered a show of her own, Inside Amy Schumer, which blends stand-up, sketch comedy and tongue-in-cheek interviews from Schumer herself. Given Schumer’s rising star in the comedy world, it seemed inevitable that one day she’d break into feature film, and Trainwreck is more or less her true feature film debut. 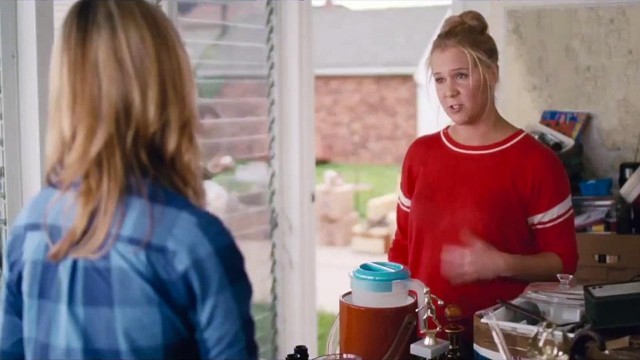 Fortunately, despite Schumer’s inexperience in the movie space, which might have felt even more prevalent when one considers that she solely wrote the script for Trainwreck, the movie is a big success, being just as hilarious and honest as you would hope for. The movie may follow a pretty by-the-numbers romantic comedy template, but the gender role reversal and biting edge nonetheless make this forgivable, and offer another very welcome triumph for this year’s R-rated comedy catalogue, to go with Spy before it.

Amy Schumer plays Amy Townsend, a writer for a trashy magazine, who is assigned coverage of an up-and-coming sports doctor, Aaron Conners, played by Bill Hader. Aaron gets a solid amount of development, being a very nice, down-to-earth guy who is surprisingly humble for his profession, but it’s Amy’s arc that’s front and center here.

As the title suggests, Amy doesn’t quite have her life in order. After her parents got divorced when she was very young, on account of her father’s bad attitude and infidelity, Amy is told as a young girl that monogamy is not realistic. She carries this belief into adulthood, where she’s become highly sexually active, and rather afraid of commitment. The closest thing she has to a steady boyfriend at the start of the movie is an implied bi-curious meathead named Steven, played by John Cena. The movie drops Cena past the first act though, which is kind of disappointing, particularly when Cena proves to be a comedic powerhouse here, taking largely juvenile dialogue, and making it absolutely hysterical.

Trainwreck makes use of a fairly robust supporting cast, but they all orbit around Amy. Amy’s sister, Kim for example, played by Brie Larson, is her polar opposite, representing a serious, committed relationship and stability, despite Kim being a stepmother. Meanwhile, Amy’s boss, Dianna, played by an unrecognizable Tilda Swinton, is her indirect enabler, encouraging Amy to try, but not really try for a better life that she supposedly can’t truly have. Amy also has a best friend of sorts, Nikki, played by Saturday Night Live alum, Vanessa Bayer, who is all of Amy’s bad habits laid bare, particularly due to her blatantly unintelligent disposition. 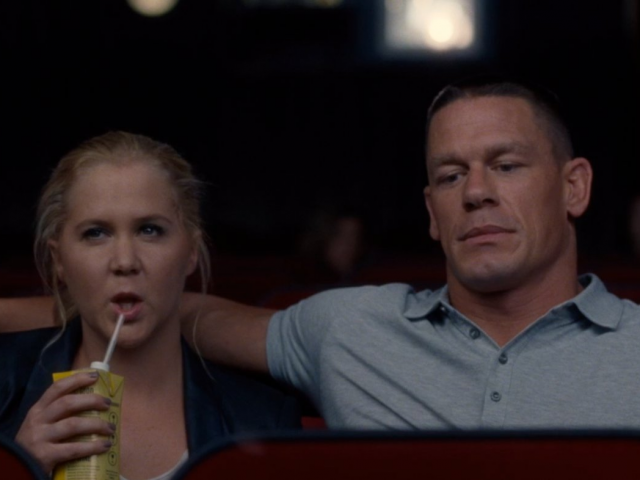 Amy herself meanwhile is given a genuine mischievous likability by Schumer, even though you know that this character can do better than her current life standing at around thirty-five years old, and aggressively commitment-phobic. She’s a textbook example of someone who has a lot of untapped potential, but has a bad habit of getting in her own way. The movie does a good job of illustrating exactly why Amy is the way she is however, and the smartly written script finely balances serious life examination with genuine hilarity, thanks to a lot of sharp dialogue. It makes Trainwreck feel both smart and funny, and it’s easy to speculate that Schumer might be drawing on some reliable life experience to create a protagonist that feels this real and flawed in all of her charm.

Hader is left to be a bit more of a straight man as key love interest, Aaron, but he still gets a handful of nicely funny moments, especially when he’s allowed to play off of Schumer, who serves as the main comedic muscle behind the movie. Hader does however get some scenes to himself, which are equally entertaining, thanks largely to the presence of a surprisingly funny LeBron James as a foil, playing an emotional, overbearing caricature of himself that functions as Aaron’s best friend figure. LeBron draws the most attention to Hader filling the traditional female role in the romantic comedy foundation here, and hearing a sports superstar like him deliver the kind of lines that a nosy female best friend would have in most chick flicks is very funny stuff by itself, especially when LeBron proves to be quite talented at comedy in this movie.

Trainwreck even manages to pack in some pretty amusing cameos that are done purely for the sake of big laughs, namely in featuring Daniel Radcliffe and Marisa Tomei as a couple in a fictional movie that Amy and co. keep ending up watching both in theatres and on the TV. It’s an effective commentary on the increasing apathy and stupidity behind the dying genre of ‘chick flick’, and Trainwreck benefits from this gag a lot, in that it draws attention to how a simple role reversal has already made for a big turnaround in quality. Likewise, there’s one hilarious scene in the third act that packs in several celebrity appearances, but I won’t spoil it. You even see future Ghostbuster and fellow stand-up comedian, Leslie Jones for less than a minute in one funny throwaway appearance, but it works very well.

Trainwreck is packed with great personalities, which make its sharp writing shine even more. Again though, they’re all brought together by the genius of Amy Schumer’s script and lead performance, which does indeed make a supposed lost cause well worth rooting for.

Trainwreck tells a very simple story, but its simplicity works to its benefit. The story is unintrusive, and simply allows the personalities to drive it forward, which director, Apatow has displayed a lot of skill with in his debuting hits, The 40 Year-Old Virgin and Knocked Up especially. As with those movies, Trainwreck is simply about a rather unfortunate individual in a quite believable mess, and despite the fact that Apatow is merely directing Trainwreck, not writing it in this case, the movie still undeniably feels like an Apatow movie, which speaks volumes about how well-paired Apatow is with Schumer.

The movie is entirely about the journey of its lead character to a life of normality and functionality, much as The 40 Year-Old Virgin and Knocked Up were. This seems to be where Apatow movies function the best, since Trainwreck is a marked story improvement over the plodding, aimless Funny People, and the somewhat dry, uninteresting This is 40. Trainwreck goes back to taking a character, giving them a clear direction, and simply letting the misadventures unfold as they will. The story avoids the feeling of meandering that Funny People and This is 40 often suffered from, with Amy’s objective being pretty clear-cut, though the journey being anything but that.

This once again allows the laughs to take center stage in Trainwreck, which helps the movie easily find longstanding entertainment value throughout its rather meaty 124-minute runtime. There are serious moments, but they never turn the movie into a bore, especially considering that Schumer knows when to insert tension-cutting jokes into otherwise depressing scenes, demonstrating a wise, inspired hand in making a movie that clearly unfolds in the real world, but doesn’t forget that it’s supposed to be a comedy before anything else.

Trainwreck may stick more closely to established comedy principles than you might initially think, but it simply focuses on delivering a story that is well-polished and very funny. To that end, it definitely succeeds.

Judd Apatow goes back to basics, and trusts in Amy Schumer’s writing, and the result is the most effective and most interesting comedy that he’s directed since Knocked Up. Schumer and Apatow appear to function like a well-oiled machine, making use of Apatow’s directing pedigree to great effect, with Schumer’s script and Apatow’s directing both being well in sync, but also being relaxed and not aiming to step on the toes of the other person.

Even if Apatow’s past couple of scripts had some issues, the man is still a comedy genius, and brings out the best in everyone at all points of the story. Again, Schumer is the key presence here, but even the smallest of supporting actors get some great turns, with Apatow clearly leaving room to improvise, and allowing this funny, talented cast to do what they do best. Everyone appears very relaxed and confident, and there’s not a single weak pairing in any given scene, with all of the actors playing off of each other beautifully.

As funny as Trainwreck is though, it also benefits from Apatow’s increased maturity and experience in the directors’ chair. He encourages just the right amount of humanity with the performances, but makes sure that everyone is having fun as well, and that includes the audience. This makes Trainwreck feel like it comes from a real place beyond the hysterical mind of Amy Schumer, and even a character like Schumer’s lead is bound to be surprisingly relatable to quite a few people, even if we no doubt won’t want to admit it.

Trainwreck is another great R-rated Summer comedy, and another strong hit for the awesome run of movies that Universal has delivered in 2015 so far, Fifty Shades of Grey notwithstanding. Apatow and Schumer are an amazing team, and Schumer makes her proper feature film debut, both as a writer and lead actress, with aplomb. Apatow also finds his stride in the directors’ chair again after many years, benefiting from entrusting script duties to someone else for the first time.

Like I said, Trainwreck comes from a very real, relatable place for more people than you would think, and that makes it a comedy with both heart and intelligence. Even if you don’t relate to its hot mess of a title character though, the movie is nonetheless very funny, thanks to its fantastic script, and very amusing performances across the board. Alongside 20th Century Fox’s Spy, Trainwreck is the other must-see Summer comedy of 2015 for adult audiences at this point, even if it doesn’t really re-invent the formula of a so-called ‘date movie’, merely flipping it around. 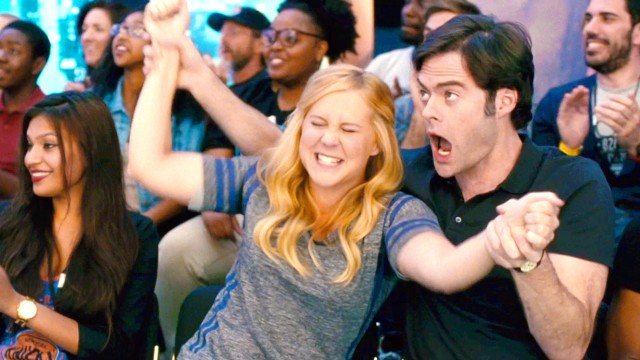 Still, this is a strong comedy, and I’m very enthusiastic to see Schumer and Apatow team up again in the future. Even Schumer by herself sets up for a bright future in feature film comedy with Trainwreck, and hopefully one that can continue to see R-rated comedies keep steadily moving on an uptick.

Trainwreck Review
Trainwreck still hits the familiar beats of a romantic comedy, but its role reversal is executed to great effect, and its brilliant script, amusing performances and sharp direction help it stand alongside Spy as one of this Summer's top R-rated comedies!
CHARACTERS90%
PLOT85%
DIRECTION95%
THE GOOD STUFF
THE NOT-SO-GOOD STUFF
2015-07-20
90%Overall Score
Reader Rating: (0 Votes)
0%