UPDATE: Microsoft has clarified a few questions about Crackdown 3 after it had its first details discussed at Gamescom’s Xbox keynote. First, to allay some fears, Crackdown 3’s single-player component is fully playable offline, and the game doesn’t demand an internet connection. If your Xbox One is offline however, environments will only be semi-destructible, not fully destructible, since the fully destructible environments are dependent on the online Cloud servers to power that level of physics. Secondly, the game is actually coming out in Summer 2016, not Holiday 2016, which means that the multiplayer beta announced at the keynote will probably be early next year, but we should still wait for official confirmation and finer details.

Microsoft’s mysterious third Crackdown game, currently in development for Xbox One, got its proper first look at this year’s Gamescom. After so much speculation about the state of the game’s title, Microsoft confirmed that the game’s title will be… Crackdown 3! Well, that was certainly anti-climactic. 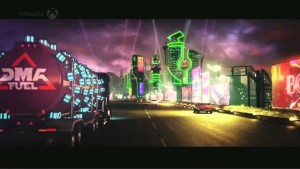 Nonetheless, Crackdown 3 will no doubt be the biggest and most explosive Crackdown game to date, as it will now be taking advantage of the next-gen hardware powering the Xbox One. Microsoft declared Crackdown 3 to be the ultimate sandbox gaming experience at their Gamescom 2015 press keynote, with the whole open-world setting apparently being fully destructible, and ‘transforming vehicles’ apparently being a cornerstone of gameplay. Crackdown 3 will also be one of the first high-profile Xbox One exclusives to leverage the console’s high-powered connection to the Cloud, allowing 20 times the processing power over simply utilizing the innate capabilities of an independent Xbox One console. Sounds pretty promising, though it begs the question of what happens if your Xbox One isn’t connected to the internet.

Lastly, Microsoft revealed that a multiplayer beta will be offered for Crackdown 3 at some point next year, though they weren’t specific about how you can gain access to it. Microsoft wasn’t even specific about whether it will be a closed beta that will require a sign-up, or an open beta that anyone can join when it goes live. We’ll just have to stay tuned for more information later. That said however, this would appear to place Crackdown 3 in a Holiday 2016 launch window, though Microsoft has only so far stated that the current plan is to release the game in 2016.

Crackdown 3 was originally announced during Microsoft’s E3 conference last year, without a finalized title at that point, though it was entirely absent from this year’s E3. This was intentional however, since Xbox boss, Phil Spencer felt that Microsoft’s E3 lineup was already very crowded, particularly with all-new announcements, and purposely held off on showcasing several highly anticipated upcoming Xbox One exclusives until Gamescom as a result.

Keep dispatching Eggplante for all news and updates on the Crackdown series.