After the game sat out this year’s E3, Microsoft has now drawn back the curtain a little more on their hot new Xbox One IP, Scalebound, at Gamescom. 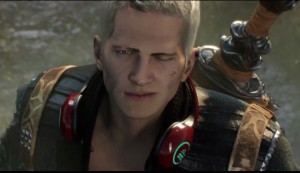 A first-ever look at gameplay debuted at the European expo, which showcases the human protagonist, revealed to be named Drew, who inhabits a world called Draconis, altering the cellular structure of his arms to resemble the scales of a dragon. This appears to be the inspiration behind the game’s title. Drew makes use of a large dragon-like companion, presumably controlled by his being ‘scalebound’, who helps him lay waste to a platoon of soldiers. Later, Drew and the dragon then take on a large monster, with the two utilizing teamwork to take it down. The gameplay appears to take undeniable inspiration from Monster Hunter, if you had a full-fledged monster as your ally, unfolding as an action-RPG with damage counters and loot, though it also packs in some of the action-packed sensibilities of director, Hideki Kamiya’s big hit action game franchises, Devil May Cry and Bayonetta.

After the trailer wound down, it confirmed Scalebound’s release window as Holiday 2016, then revealed that the game will feature four-player co-op, seemingly allowing other players to join your adventure whenever they’re needed. Developer, PlatinumGames didn’t reveal whether offline split-screen co-op would be available, but given that Scalebound seems to feature a grand, sweeping presentation, and a good slew of RPG elements, it seems probable that the co-op will be online-only. 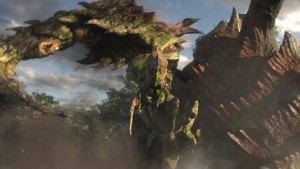 Scalebound was first announced during Microsoft’s press briefing at last year’s E3, and is one of several projects that is keeping rising star, PlatinumGames quite busy lately. The Xbox One exclusive will be preceded by both a new multiplatform Transformers game for Activision, Transformers: Devastation, and Wii U exclusive, Star Fox Zero this year. PlatinumGames is also developing a PlayStation 4 exclusive, a sequel to Square Enix’s cult hit, NieR, which ironically has them juggling a multiplatform game, a Wii U exclusive, an Xbox One exclusive, and a PlayStation 4 exclusive, all at the same time at present.

Keep summoning Eggplante for all news and updates on Scalebound.