Microsoft has predictably announced a third ‘season’ of content for their freemium Xbox One fighter, Killer Instinct, which they confirmed during their Gamescom press briefing today. After introducing so many fan-favourite fighters in their revival of the highly acclaimed 2D fighter franchise, who else is left to keep headlining new brawlers in the fight against (or for) UltraTech however? 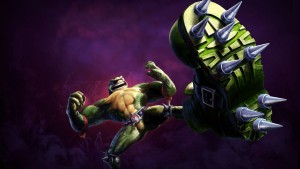 Well, why not tap into another Rare-developed franchise? That’s exactly Microsoft’s plan to set the stage for Season Three, as the first fighter confirmed to be joining the roster anew is none other than Rash, one of the protagonists from cult hit retro game series, Battletoads! Now redesigned in gorgeous modern HD graphics, Rash was given a reveal trailer that demonstrated his moveset, and how he may stack up against the established personalities of Killer Instinct.

Microsoft isn’t yet kicking off Season Three proper, and they won’t do so until Spring 2016, unfortunately, when it will begin rolling out for both Xbox One and Windows 10 PC’s. Since they want to whet players’ appetites for the new content to come however, Rash is being released for the game today! There is a catch however, as only certain players will have access to Rash for now, who is in something of a ‘beta’ period. The best way to secure access to him is to have purchased today’s release of Rare game compilation, Rare Replay already, while also having downloaded and played Killer Instinct, naturally.

Battletoads saw several installments across retro platforms like the NES, Game Boy, Super NES, and Sega Genesis, where it was praised for its flexible gameplay design, even though the series’ staggering difficulty has gone down in infamy amongst longtime gamers, particularly in regards to its original and most well-known NES offering. After the advent of three-dimensional gaming on the Sega Saturn, PlayStation and Nintendo 64, the franchise was pretty much shelved by Rare. Only recently has Battletoads began slowly trickling back into the gaming industry, with Microsoft teasing a proper all-new Battletoads game to come for the Xbox One, and the Battletoads also being made exclusive hidden boss characters that you can only fight in the Xbox One edition of indie mega-hit, Shovel Knight.

Keep bashing Eggplante for all news and updates on Battletoads, Killer Instinct and other high-profile Rare game projects.