One of last year’s biggest surprise hits on the big screen was The Fault in Our Stars, a teen-oriented cancer drama adapted from the best-selling novel of the same name by John Green. The Fault in Our Stars was enormously profitable, grossing over $300 million worldwide, making back almost thirty times its meager budget, and that’s not even counting home video sales and rentals. The movie was directly cited as being one of the key contributors for a record-breaking year of success for distributor, 20th Century Fox in 2014, alongside other enormously profitable Fox movies like X-Men: Days of Future Past, How To Train Your Dragon 2, The Maze Runner, Gone Girl, and Dawn of the Planet of the Apes.

Because of the massive success of The Fault in Our Stars, Fox 2000, the dedicated teen label of 20th Century Fox that distributed the movie, fast-tracked another John Green adaptation to the big screen for this year, that being Paper Towns, in hopes of achieving the same surprise success. Unfortunately though, Paper Towns didn’t seem to strike the same chord with moviegoers, getting lost in a sea of far more high-profile Summer movie releases, and making far less money as a result, made worse by the less impressive feedback in contrast to The Fault in Our Stars. 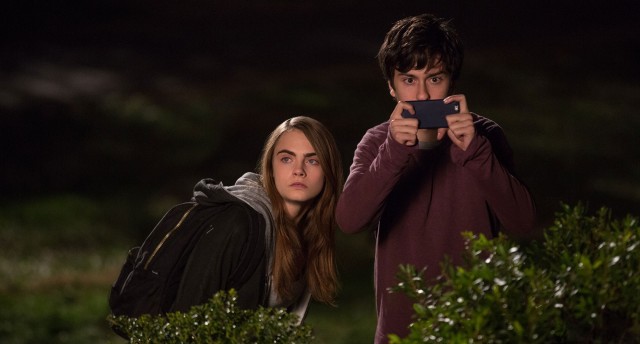 A big part of the problem with Paper Towns is that it lacks the more universal appeal of The Fault in Our Stars, and feels like it’s more exclusively directed at teens, which gives it a very limited target audience. The movie’s more ambitious narrative concept also feels less accessible, with the marketing not being completely clear about what kind of story the movie is actually trying to tell. Most problematic however is that Paper Towns has a plot that doesn’t translate well to being a movie, resulting in frequent issues with pacing and structuring that make the movie feel a bit poorly-constructed, and blatantly ripped almost wholesale from a novel.

Paper Towns is at least easy to watch however, having enough heart behind it to help audiences overlook its blatant flaws. If they’ve long since abandoned their teenage mindset though, there won’t be much of an impression left after the credits start rolling.

Paper Towns’ lead character is ‘square’ protagonist, Quentin “Q” Jacobsen, who has always idolized the enigmatic and popular girl next door, Margo Roth Spiegelman, played by Cara Delevingne. Despite the two formerly being childhood friends, they eventually grow apart after a traumatic incident that they both handle quite differently, that is, until Margo breaks into Q’s house late at night towards the end of high school one day, seemingly in an effort to re-connect.

A major theme in the movie is that Q has planned his life out quite meticulously, and never strays from both his expectations of himself, and the expectations of those around him. This is in stark contrast to Margo, who has run away from home multiple times, and doesn’t seem to truly trust anyone to know what’s right for her. In a way, Q idolizes Margo because she’s a free spirit, and isn’t confined to a path that Q sub-consciously feels is already laid out for him.

The better part of the movie involves Q trying to track down Margo after she goes missing, following their long night of mischief and revenge on those that have allegedly wronged Margo, but on a deeper level, Q is also trying to find meaning by chasing a construct of an idea that Margo appears to embody for his future, the idea that Q is capable of choosing his own destiny. This is something that teens can no doubt relate to best, but adults who have already found their niche in life will probably feel like Paper Towns is simple-minded, and ultimately doesn’t come off as deep as it seems to think it is.

The naive adolescent narrative viewpoint does make the movie feel authentic though, especially with Nat Wolff delivering a genuine and likable lead performance. Complementing him nicely are Austin Abrams and Justice Smith as Q’s two best friends, Ben and Radar, respectively, with Radar being a similar goody two-shoes that is seemingly under the thumb of his girlfriend, Angela, and Ben being a boastful young twerp who constantly lies about having street cred and being cool. The trio are a likable bunch of underdogs, which makes their acts of delinquency and irresponsibility feel tolerable, and sometimes even genuinely charming. The movie really would have fallen apart if its protagonists weren’t this easy to root for.

The key catalyst to everything however is definitely Cara Delevingne’s Margo, with Paper Towns being meant as one of the key ways to debut Delevingne as an actress, after she’s previously become one of the world’s top-paid models. Delevingne signed for this movie alongside a minor part in delayed fantasy blockbuster, Pan, and a key role as DC villain, Enchantress in next year’s DC Comics adaptation, Suicide Squad. As for how Paper Towns marks Delevingne’s major feature film debut… Well, it’s a bit of a let-down.

This isn’t a reflection on Delevingne, who does have a lot of promise as a young actress, and plays her role in Paper Towns exceedingly well, with a lot of quirky tics and mannerisms that make Margo easily the most memorable character in the movie. Unfortunately though, despite her high billing, Delevingne is barely in the movie beyond two major sequences, having less than twenty minutes of combined screentime, which amounts to less than 25% of the entire movie. Worse still is that the movie works best without her character constantly being around, since the idealized and seemingly invincible Margo is firmly at odds with the story that Paper Towns is trying to tell. Frankly, the movie would have been dragged down if we’d seen more of her.

Paper Towns works best when it effectively makes the earnest confusion of our protagonists feel endearing, leading to a conclusion that thankfully doesn’t feel like a Hollywood ending, but still wraps everything up for our heroes on a nicely feel-good note.

Paper Towns treads quite closely to the progression of the source novel, only omitting a handful of scenes from the book, and otherwise proceeding in almost exactly the same fashion. The ending of the movie is altered slightly from the source novel, but that’s the only major change, and the final result of everything is still more or less the same as the book regardless.

This devout faithfulness to the novel will no doubt be appreciated by fans of the book, but it does sometimes work to the detriment of the movie. Paper Towns is structured very oddly, with the screenplay not effectively translating the concept to the movie medium. It’s not un-entertaining, but the movie seems to jump around quite frequently, clearly following the structure of the novel to a fault, and not making it flow very organically. Rather than put together a distinct vision of the story for the big screen, Paper Towns instead feels like it’s just going down a checklist of stitching together scenes in the novel, and only occasionally leaving some bits out. Frankly, it’s a bit of a rigid adaptation at times.

Taken purely as a movie though, and putting aside the source novel, the structuring issues and odd pacing don’t manage to override the sense of heart and genuine whimsy behind the plot. The humour is vanilla, but nonetheless good-natured, and the heartfelt resolution is well-realized in the movie, which has enough charm to entertain even adult audiences, so long as they’re not hung up on the fact that the movie’s actual life wisdom is ultimately pretty shallow. In trying so hard to emulate the style of the book, Paper Towns gets a bit thematically lost in the movie adaptation, seeming to indecisively stumble between multiple themes that it doesn’t manage to illustrate well, and not really managing to get any kind of message across in the end, ultimately settling for just being a feel-good adolescent romp.

If that’s what you’re in the mood for, then Paper Towns delivers some hearty smiles, but its influence will ultimately be fleeting for most audiences, who no doubt outgrew this simple look at the world a long time ago.

Paper Towns is directed by Jake Schrier, who has limited feature directing experience, but did turn heads with his award-winning oddball dramedy, Robot & Frank, back in 2012. With Robot & Frank, Schrier proved that he could effectively balance comedy and drama, and that makes him well-suited to a simple blend of both like Paper Towns.

Schrier adds a wholesome, wide-eyed touch to the story of Paper Towns, almost making it a fantastical piece that is nonetheless fully rooted in the real world. His direction of the actors feels very heartfelt, and captures the feeling of a great journey to a fulfilling destination, even when it’s easy for audiences to feel that the protagonists are still very young, and mostly in over their heads.

Schrier’s direction is one of the best parts of the movie, managing to take a somewhat uninspired template for a movie adaptation of the source novel, and do something better than expected with it. Schrier still doesn’t ultimately manage to extract any groundbreaking themes or wisdom from what ultimately amounts to a largely conventional teen mystery dramedy in terms of the progression, but he makes Paper Towns present itself with a lot of pleasantness, which keeps everything feeling genuine, even when the movie itself starts getting as confused as its teenage lead.

Paper Towns sets out with a genuine desire to entertain and inspire, but it likely won’t elicit much of a reaction from anyone older than 20 years old. Its young-minded presentation feels undeniably heartwarming, and its concept is creative, even if the progression doesn’t ultimately feel that ambitious, despite the movie being commendable for not neatly wrapping everything up with a phony, unrealistic ending.

If you’re interested in the movie, and don’t mind the fact that it’s ultimately thematically confused and lacking any true insight into real-world living, then Paper Towns is charming enough to merit a recommendation. If you’re less than actively interested though, you’re not really missing anything by skipping this movie, even if you really enjoyed The Fault in Our Stars already. Paper Towns is something you could just as easily rent on home viewing and watch once, which is cheaper and more practical than rushing out to the theatre for it, especially when so many better Summer movies are screening in theatres right now.

There isn’t much else to say about Paper Towns, which carries a story far better realized in novel form. The movie is passable, but taken as an adaptation, it’s a bit of a middling offering for the John Green catalogue. This also sadly won’t be the big breakout turn for Cara Delevingne on the big screen, as much as her reps were hoping otherwise, with Delevingne’s big break still likely being ahead of her.

At the very least though, Delevingne’s character is worth chasing in the big screen version of Paper Towns for those wanting to seek her out in the first place, even if you won’t get as much out of the trip as our heroes do, and even if this Delevingne vehicle ironically feels strongest when Delevingne is nowhere in sight.

Paper Towns Review
Paper Towns is a passable teen dramedy with heartwarming performances and direction, but its odd structuring and thematic confusion make it inferior to its source novel, and only teens will probably get all that much out of this simple-minded romp.
CHARACTERS70%
PLOT55%
DIRECTION80%
THE GOOD STUFF
THE NOT-SO-GOOD STUFF
2015-08-10
68%Overall Score
Reader Rating: (0 Votes)
0%