Despite the protests of fans worldwide, who tried valiantly to keep it going, NBC unfortunately pulled the plug on DC Universe-inspired occult drama series, Constantine this past May. Even with the show being gone however, it came out that, back when the show was airing, there were plans for Matt Ryan’s interpretation of lead character, John Constantine to poke his head up in other corners of DC’s television shows. Now, those plans are finally coming to pass! 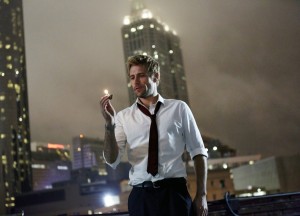 After plans to feature him during the third season fell through, due to then-present issues with The CW having to negotiate with NBC to share the Constantine character, The CW has now confirmed that Constantine will make an appearance during Arrow’s fourth season, with Matt Ryan reprising the role from NBC’s cancelled fan-favourite series. Ryan’s Constantine will be featured in the fifth episode of Season Four, which is titled, “Haunted.” Currently, the episode’s synopsis is unknown.

The CW has teased however that Constantine may have a hand in the resurrection of a previously dead character during this episode. Naturally, the obvious speculation points to Sara Lance, who was seemingly killed off during the Season Three premiere of Arrow last year, but is now coming back to life to star as White Canary in ensemble spin-off series, Legends of Tomorrow, starting next year. Evidence of this is strengthened frpm the revelation by The CW that the aborted plan to use Constantine during Season Three would have revolved around Constantine being consulted as an expert on the supernatural Lazarus Pits, which were used to give unnaturally long life to Season Three villain, Ra’s Al Ghul. It’s possible that the plan for Season Four is unchanged, especially since the reveal trailer for Legends of Tomorrow appeared to confirm that a Lazarus Pit would be involved in Sara’s resurrection. 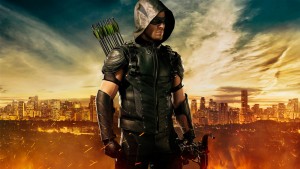 Constantine’s introduction into The CW’s shared DC Television Universe is at least one upside of the character’s series being cancelled by NBC. Because of the cancellation, the Constantine television rights ended up reverting back to Warner Bros. Television, which would theoretically allow them to re-hire Matt Ryan, and place him in any DC Comics-inspired show on the air at present. This doesn’t appear to be a sign that Constantine has any shot of a full revival unfortunately, and it’s possible that Arrow may not end up sharing continuity with Constantine in the end, but it’s nonetheless great to have Matt Ryan’s Master of the Dark Arts make a return to the small screen!

Keep demonizing Eggplante for all news and updates on Arrow, Constantine, and other high-profile DC television projects.