The original Gunman Clive from Swedish indie developer, Horberg Productions, is a textbook example of how simplicity can really benefit an indie game. A run-and-gun platformer with an Old West vibe that feels undeniably inspired by the pick-up-and-play action of classic Mega Man, Gunman Clive costs a grand total of $1.99, and, while short, it earns every bit of its paltry asking price. With sharp level design, and special challenges that encourage short-burst replayability, the game proved to be a perfect fit for its launch across PC, iOS, Android, and the 3DS eShop.

Several years later, we now have a sequel, Gunman Clive 2. This time however, the game is exclusive to 3DS for now, though a PC version is currently courting votes on Steam Greenlight, with prospective mobile ports currently up in the air, according to Horberg Productions. Gunman Clive 2’s timed exclusivity on 3DS comes as a result of the 3DS eShop version of the first Gunman Clive game being arguably the most popular, and generating the highest sales. In fact, the 3DS build of the first game absolutely slaughtered the other ports, accounting for over 80% of the first Gunman Clive’s total (and impressive!) 400,000+ downloads sold!

Gunman Clive 2 brings back the same simple run-and-gun platformer appeal as its predecessor, once again coming in a small, modest package. The game is arguably even better than its predecessor however, with new playable characters, new hazards, and noticeably more ambitious level design and challenges. It’s still an uncomplicated experience, but priced at a mere $2.99, it’s a neat little diversion that’s perfect for those looking for a well-produced portable platformer that represents quality over quantity.

Like its predecessor, Gunman Clive 2 presents itself with one singular colour overlay, having key character sprites and effects being the only colour variations on that palette, with the majority of the graphics being defined by different shades of said background colour. It continues to echo a modernized classic Game Boy game in its look, but the game’s art style remains incredibly distinct and appealing, especially with Gunman Clive 2 changing the colour palette between stages to a more varying degree than the first offering.

Despite the modest look however, Gunman Clive 2 constantly animates at a brisk clip, without a lick of slowdown. The platforming and gunplay feels floaty, but very methodically calculated, with players tasked with mastering the game’s own unique sense of physics, which can be tough, but never unfair. This goes doubly true for the all-new rear-view sections, which have your character either flying or racing at high speeds, while dodging projectiles and firing at foes that stand in your way. Fortunately, these also perform well, and make dodging and returning fire feel snappy and satisfying to pull off. 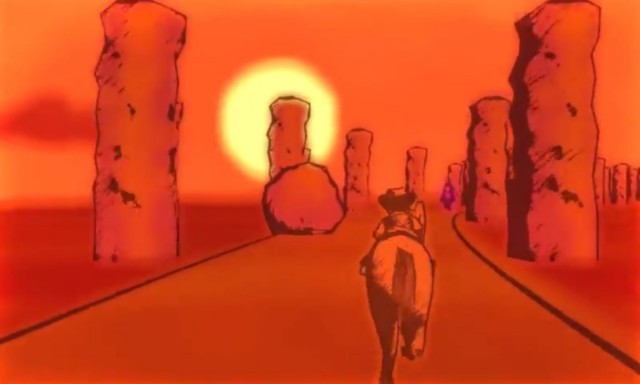 All of this remains true when the 3D Slider is cranked up, which makes Gunman Clive 2’s backgrounds stretch out, and appear more immersive. Those playing on a 2DS, or opting to keep the 3D Slider flicked off, won’t notice any major downgrades during most of the gameplay, but where they will be at a slight disadvantage is in the rear-view sections. Since Horberg Productions clearly wanted to prioritize the 3DS build of Gunman Clive 2, the game feels much more explicitly tailored for Nintendo’s handheld. As such, the rear-view sections are designed to take advantage of the added depth precision of playing in 3D, which means that maximizing the 3D effect better allows you to gauge the distance of enemies and projectiles, and react to them with greater accuracy. Those playing the game in 3D will find these sections to be noticeably more thrilling and intuitive than those playing in 2D.

As with the gameplay, the art style of Gunman Clive 2 continues to emphasize that less can be more. The deeper hues give the sense of increased production value, but the graphics are still clean and uncomplicated, while giving the Gunman Clive games their own very distinct visual identity, combining retro handheld stylings with a sort of primitive, hand-drawn aesthetic, to great effect!

The soundtrack of Gunman Clive 2 echoes its predecessor, in having cowbow-style, acoustic guitar-heavy tunes that fit the Old West backdrop perfectly, while also feeling quaint and fun to listen to. Humming along with the game gives you the feeling of a simpler time, back when you played Cowboys & Outlaws with your action figures, right down to tossing in more out-of-place elements like aliens, because that’s what your childhood imagination would no doubt cook up. That child-like charm is once again alive and well in the sound design of Gunman Clive 2, which continues to represent a pure and innocent adventure, but one that feels no less like an adventure.

Appropriately, given the classic Game Boy-esque vibe, sound effects continue to be very simplistic. Sounds are intentionally designed to be fuzzy, tinny and beepy, as if you were playing them on an old monochromatic handheld back in the early 90’s. It doesn’t sound nearly as authentic as the music, but it still works great, creating something that feels very retro chic, though doesn’t use that as an excuse to present something cheap or devoid of inspiration.

Gameplay in Gunman Clive 2 remains as simple and pleasant as you can get. You have the option of taking control of either Clive or Ms. Johnson once again, with an all-new Native American-style character, Chieftain Bob, being added in to the sequel. Clive and Ms. Johnson are quite similar, both utilizing handguns, though Ms. Johnson can slowly glide downward if you hold the B Button after a jump, while Clive is slightly more durable.

Chieftain Bob however is a significant switch, as he is only able to use close-range, melee-style spear attacks. This considerably changes up the gameplay, with Bob being the most difficult character to use and master, especially in the rear-view sections that unfold in an on-rails style, though he’s also by far the most rewarding personality to complete the game with, especially on higher difficulties! The rear-view sections are wasted on Bob, who isn’t even given a projectile then, but again, it encourages you to play more defensively, making Bob’s inclusion in the game welcome for those wanting to really put their skills to the test.

Fortunately, what really makes Gunman Clive 2 such a delight is the fact that its level design remains very well-done, and in many ways, it’s even better than the first game! Horberg Productions have tried to implement more new and interesting obstacles beyond the rear-view sections, with shifting gravity being the primary new platforming obstacle thrown into the mix, and it makes for stages that feel smart and exciting to make your way through.

Likewise, the game’s boss battles are still well-done, with the final boss being a particular standout, due to its intricate, large-scale takedown method. All of Gunman Clive 2 feels great to play through, taking you to a more diverse and interesting set of stages, as Clive and co. pursue the alien threats from the first game, and attempt to strike back at them on their home turf. You’ll move between surreal mansions, samurai strongholds, steampunk warships, and more, and it all feels very satisfying to play and enjoy!

Even when you do complete Gunman Clive 2, there’s plenty more to strive for, beyond taking on the game again as a different character. You can try for No Damage! feats in each stage, as well as try to beat your best par times, which help to make Gunman Clive 2 a great way to pass the time whenever you need to pull it out on a bus ride or a waiting room stint. The level design is so finely-crafted and satisfying that avid gamers will find that replaying it is its own reward, just as with any vintage Mega Man game or Super Mario Bros. game that they could pull from the 3DS Virtual Console selection.

Initially beating the game will also net you access to Duck Mode, where players take control of a duck that has no direct means of attacking, but can fly to a point. Like with Chieftain Bob, Duck Mode is a fantastic way to add a new spin on gameplay, and something that those looking to test their skills will really enjoy, on top of the obvious humour factor that comes with playing as a duck. Duck Mode was one of the most surprising and satisfying bonuses in the first Gunman Clive, so it’s great to see that it’s as fun and challenging as ever in Gunman Clive 2!

As with the first game, the only real knock against Gunman Clive 2 is that it’s pretty short. You can beat the game in under an hour, as with many vintage NES and Game Boy platformers, if you know what you’re doing. Like I said though, Gunman Clive 2 is so well-designed and enjoyable, just like its predecessor, that replaying its stage design with new characters and challenges, or simply to kill some time, feels like its own reward. 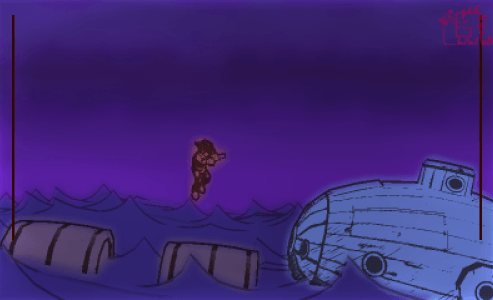 This game feels like it would have felt right at home amongst the library of Game Boy games from the early 90’s, but thanks to releasing in 2015, it’s able to come along with modern polish as well, boasting fast-paced gameplay, made all the better with sharp 3D work and clear, catchy music, among other great perks!

Gunman Clive 2 effectively pushes forward the great ideas of its predecessor, but it nonetheless remains very accessible and fun. There isn’t much content, again, like its predecessor, but the content feels rewarding and replayable, making a very budget-friendly 3DS eShop game that’s easy to pick up and play whenever you need a simple gaming fix to pass the time.

Sure, you could just as easily play something you downloaded from a more established vintage game catalogue on the 3DS Virtual Console line, but Gunman Clive 2 exceptionally stands with several of those great classics, especially since it’s even cheaper than the flat $4.99 price of an NES game to play on your 3DS, and even the majority of Game Boy games and Game Boy Color games!

For $2.99, you’re still buying something simple and straightforward, but Gunman Clive 2 uses its paltry package to maximize entertainment value, and put its best ideas forth without compromise. Its predecessor is already great, but Gunman Clive 2 manages to be even better, feeling especially cool and unpredictable, even if the simple gameplay foundation is wisely undisturbed.

If you grew up on old 8-bit platformers on the NES and Game Boy, or at least have an appreciation for them, Gunman Clive 2 shouldn’t be missed if you own a 3DS or 2DS, and nor should its predecessor. Here’s hoping for Gunman Clive 3 in the near future, because this cowboy is still riding high!