Shortly after Sony revealed the six free games that PlayStation Plus members can redeem this September, Microsoft chimed in with their own quartet of freebies for the month of September, for their competing Games with Gold incentive.

If you have yet to redeem Metal Gear Solid V: Ground Zeroes on Xbox One, or Metro: Last Light on Xbox 360, you only have another week to do so! Once September starts, both games will go back to their original paid pricing for Xbox Live Gold members. How to Survive: Storm Warning Edition will remain free on Xbox One for Gold members at the start of the month however, instead being replaced by the second free Xbox One reward for September on the 16th.

Without further ado then, let’s get started on what Xbox Live Gold members can score for free during this coming month:

The first free Xbox One reward for September will be The Deer God, which is free throughout the entire month. Funded on Kickstarter, and originally launched for PC via Steam this past February, The Deer God is an adventure-style puzzle-platformer about a divine deer. The game promises to challenge your perceptions of karma, religion and survival. It received positive feedback in its initial Steam release, and will be releasing on Xbox One for the first time on September 1st. Aside from PC and Xbox One, ports are also planned for Wii U, PlayStation 4, PlayStation Vita, and Ouya.

The second free Xbox One reward for September will be Tomb Raider: Definitive Edition, which will replace How to Survive: Storm Warning Edition on September 16th, and be free for Gold members until October 16th. An enhanced edition of the original 2013 Tomb Raider reboot for PC, Xbox 360 and PlayStation 3 (the Xbox 360 version was actually offered as a free Games with Gold reward earlier this year), Tomb Raider: Definitive Edition enhances the presentation with a smoother framerate, updated physics and animations, and a complete bundling of all of the game’s multiplayer DLC. Taking place from the perspective of an untrained, raw and initially helpless 21-year-old Lara Croft, the game has players guide Lara through an island of twisted ritualistic horrors and killers, in a desperate bid to survive a shipwreck. This special edition was received well on Xbox One, though it saw much higher acclaim and sales in its PlayStation 4 counterpart, particularly since the exclusive Kinect functionality in the Xbox One version is something that reviewers took issue with. 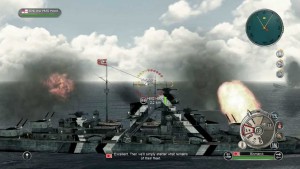 Next, for Xbox 360, Gold members can redeem Battlestations: Pacific between September 1st and September 15th. This WWII-inspired action/strategy hybrid has players battling in the Pacific Theatre, conspiring and outwitting forces on all sides, particularly in an alternate history campaign that unfolds as if the Japanese won the Battle of Midway. The game received decent feedback after its initial release in 2009, with the innovative gameplay being praised, though the framerate performance and voice acting were criticized. Battlestations: Pacific is also available for PC and Mac.

Lastly, the second free Xbox 360 reward for September will be Crysis 3, which will be free between September 16th and September 30th. The conclusion to the Crysis trilogy, Crysis 3 is a sci-fi first-person shooter that stars Prophet, a nano-enhanced soldier seeking revenge against the CELL Corporation. The game also includes a multiplayer mode, complete with asymmetric gameplay. Crysis 3 was well-received upon its initial release in 2013, particularly for its production values. The game is also available for PC, PlayStation 3 and NVIDIA Shield.

This is a pretty great month for Xbox Live Gold members, particularly on Xbox 360! Even Xbox One is getting spoiled this September however, with a full retail offering (albeit another instance where it comes after the last-gen version was already offered on Games with Gold, following Assassin’s Creed IV: Black Flag earlier this year), and a very promising new release indie to boot. Xbox 360 owners are sure to enjoy both of their full retail offerings as well, even if Crysis 3 will probably feel like the bigger prize.