Telltale has made a rather surprising announcement today, via The Verge, confirming that their latest upcoming narrative-driven adventure game, Minecraft: Story Mode, will officially be releasing for Wii U! The Wii U version will apparently arrive at the same time as the numerous other versions that were already confirmed to be on the way, after the first episode of the game debuts later this year. 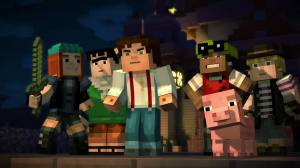 This is a big deal, not only because this makes Minecraft: Story Mode the first Telltale game to release on a Nintendo platform since 2010’s Back to the Future: The Game (and the first ever to be made for Wii U), before the developer really hit it big with 2012’s monstrously acclaimed The Walking Dead game, but also that this marks the very first time that any game in the Minecraft franchise overall has been made available on a Nintendo device. On both counts, this should be excellent news to Nintendo gamers, who have been left out in the cold by both Telltale and Minecraft in recent years.

The main Minecraft game meanwhile has still not been directly confirmed to be coming to Nintendo platforms, despite being available on seemingly every other gaming-enabled device under the sun, though ports for Nintendo 3DS, and especially for Wii U, have been incessantly rumoured nonetheless, particularly now that competing Minecraft-inspired world building sim, Terraria is at long last hitting both 3DS and Wii U next year. After Microsoft bought out Minecraft developer, Mojang however, it seemed that any hope for a Nintendo build of Minecraft was lost, despite the competing PlayStation versions of the game still being allowed to exist. Now that Minecraft: Story Mode will see ports not only on PlayStation 4 and PlayStation 3, but also Wii U, with a PlayStation Vita version also in consideration for the future, this calls into question what exactly is Microsoft’s dominion over the franchise, despite acquiring Mojang.

Minecraft: Story Mode’s first episode launches this Fall for PC, Mac, PlayStation 4, PlayStation 3, Xbox One, Xbox 360, iOS, Android, and Wii U. A beta build of the game will be playable for attendees of PAX Prime this weekend.

Keep building Eggplante for all news and updates on Minecraft, Minecraft: Story Mode, and any high-profile announcements from Telltale.