If you’re lucky, you might get a chance to sample an early build of Super Mario Maker ahead of its September 11th launch date, thanks to both specialized Nintendo events, or a generous promotion at participating Best Buy locations. I was given a chance to sample an early demo build of the highly anticipated Wii U game, which will commemorate the 30th anniversary of Super Mario Bros. this year, and was given about twenty minutes or so with the game, to get some early impressions of how it’s shaping up so close to release.

Fortunately, Super Mario Maker proves to be as fun and accessible as it’s appeared since its initial announcement. After getting a chance to try out some custom-built levels, and tinker with a few of my own using a handful of assets, I can safely say that Super Mario Maker will no doubt finally stand as Nintendo’s answer to highly successful create/share franchises like Sony’s competing LittleBigPlanet series. 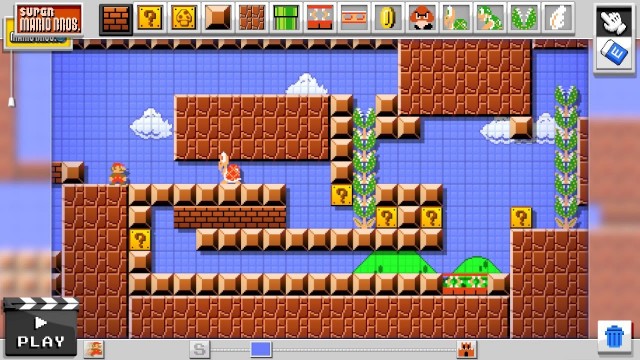 The most surprising thing about Super Mario Maker is how flexible and surprisingly complex it can be in terms of what you can design, and yet, the game is very easy to use and understand, even for someone who has never even touched a Wii U Gamepad before. The game is excellently built around the Wii U architecture, with players able to use the Gamepad’s stylus to drag and drop assets on the Wii U Gamepad Screen, simply moving the stylus about to quickly and conveniently shape the landscape, create huge assortments of blocks and/or enemies, and, if you want a wider view of your created work to that point, all you need to do is look at the television. It’s incredibly intuitive, and it makes designing your own Mario stages quite a lot of fun, even in my short time with the demo build.

Even more impressive is how clean and accessible the user interface is. There’s a couple of things that are tucked into a corner and hidden behind some panels, but after a few seconds of poking around, you’ll easily be able to keep track of what’s what, thanks to a clear and organized creative display. The game relies wholly on visual prompts to direct you, which means that even the most uninitiated of users can easily perceive and understand how to design stages. You can swap backdrops with a quick tap of the stylus as well (though you can’t mix and match backdrops, so it looks like you won’t be able to design any underwater castles, or anything of the sort), and the same is true of swapping the visual palette. Don’t like how your stage looks in Super Mario Bros. 3 style? Maybe it would pop a little more in New Super Mario Bros. U style. If not, just change it back with another stylus tap. It’s very easy!

Players can also tap a directors’ clapboard on the bottom left of the screen to start playing the stage they’re designing without any transitions or wait times, which is incredibly handy, allowing you to test your creation on the fly, rather than having to worry about saving and loading. This is very smart design, allowing you to more quickly and intuitively manage your creations, and figure out whether or not something is enjoyable from the get-go, before sharing it with your friends, or uploading it to Nintendo Network. 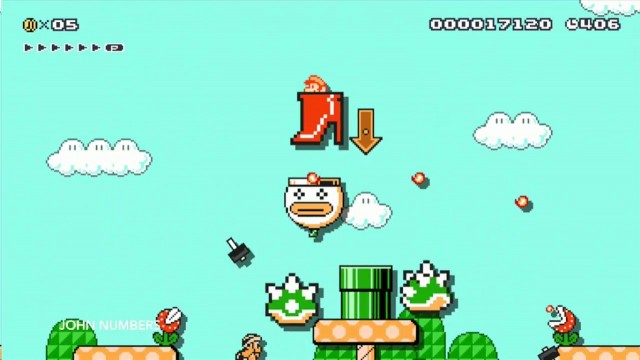 Of course, Super Mario Maker is just as much fun to play as it is to create with, making it a functional, albeit undeniably quirky Mario game in its own right. Even the demo build had a generous helping of developer-built stage designs to try, which played to the strengths of showing off the flexibility of Super Mario Maker’s creators’ suite. I didn’t quite get a chance to try all of them, which speaks to the sheer amount of stages on offer in the demo, but the quick, snappy stages, which each took just a minute or two to complete, were all very well-crafted, and presented a hefty amount of just what makes Super Mario Maker special when you stack it up against LittleBigPlanet or Project Spark or Minecraft.

Before I get into the actual playing details however, I must point out something that is largely innocuous, but may ruffle the feathers of Mario purists a tad. The Wii U’s potent HD capability has been used to clean up and smooth out the retro assets, giving them more vibrancy and definition in contrast to their NES and Super NES counterparts. This naturally isn’t noticeable with the New Super Mario Bros. U assets, but it might be a feather-ruffler for very conservative and longtime Mario fans, since the game doesn’t quite perfectly emulate a retro Mario experience with the Super Mario Bros. Super Mario Bros. 3 or Super Mario World assets.

The same is true of the controls, which, again, are largely identical to the experience of playing New Super Mario Bros. U with the Wii U Gamepad in that case, but have been made smoother and undeniably more agile in the case of Super Mario Bros. 3 and Super Mario World, and especially for Super Mario Bros., which almost feels like it’s in fast-motion in Super Mario Maker, considering how stiffly that game’s original 1985 build handled! This will no doubt be a relief to those who didn’t grow up on the retro Mario games back in the 80’s and early 90’s, and won’t have to deal with floaty, methodical controls that, frankly, feel like they’re better left in the past. For Mario purists however, this may be an annoyance, since it means that Super Mario Maker has effectively modernized the older games while maintaining the graphical style, not truly preserved how the retro Mario titles looked and handled. 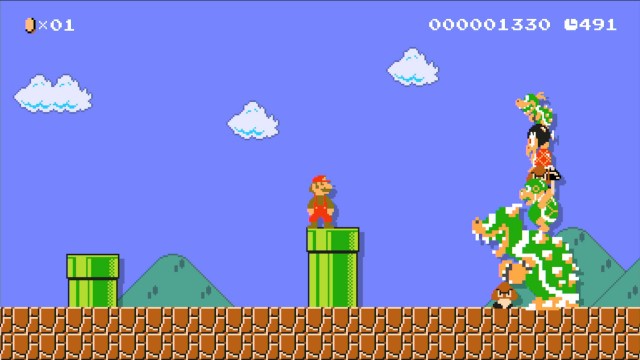 In any case, the handful of stages I tried allowed me a chance to sample designs from all four styles. Some of these were cute remixes of classic Mario stages, such as a Stage 1-1 recreation from Super Mario Bros. where the bonus area included rotating Bullet Bill Cannons that fired waves of coins at me, or a 2-3 recreation from Super Mario Bros. 3, which was suddenly filled with Chain Chomps and ? Blocks that spawned enemies whenever I hit them! Stages further provided original new twists with things like Giant Goombas that split into two normal-sized Goombas when I jumped on them, or ? Blocks that would spawn confetti and cheers as I hit them. It feels like a surprisingly effective marriage between classic Mario flavour, and modern twists that make Super Mario Maker a superb draw for anyone who savours a brand new Mario experience.

The most memorable stages I got to test out from the developers however were entirely new builds, and this is where Super Mario Maker got to be its most eccentric, and its most outrageously fun! One stage had Bowser moving along a conveyor-like track, and Mario having to avoid him and his fireballs as he lept around a lava and platform-filled obstacle course. Another stage tasked Mario with climbing up a vine that continually moved between a very precise array of blades, and since you were small, one single screw-up would be the end of you! Yet another had you racing forward against an ever-present array of saw blades that gradually pushed forward after you, which brought back some rather painful flashbacks from Battletoads, if I’m being honest! The stages were quick, yet also challenging, and while some were easier and some were harder, the hardest of the demo stages are sure to test longtime Mario players’ skills in ways that no official Mario game has dared to do before! Don’t fret about the challenge though, as Super Mario Maker grants you infinite lives, and allows you to respawn immediately where you were defeated in a custom stage of your own design.

An especially memorable stage also gave me a quick tease of some of the game’s planned Amiibo functionality, where players can tap compatible Amiibo figures on the Wii U Gamepad’s NFC Reader to swap Mario with an 8-bit recreation of another recognizable Nintendo personality, or apparently Sonic the Hedgehog, which is all kinds of a head trip for 90’s kids like me! This Stage 1-3 recreation from Super Mario Bros. allows you to hit ? Blocks that continually change Mario into different characters, ranging from Luigi, to Toad, to Yoshi, to Peach, and even to Bowser! It was a rudimentary roster of Mario personalities, but they each boasted their own sound effects and exclamations, which made playing with them a cute draw, if you have any particular favourites from the Nintendo pantheon. I obviously couldn’t actually test Amiibo with the demo, but I still got a perfect idea of how most of the supported figures work in Super Mario Maker, thanks to this demo stage.

True to form as well, if you ever get a creative spark while playing the developer-made stages, you can immediately leap to the editing suite with a tap of the stylus, with no transitions or waits required! The fact that you can use these very well-made stages as a base is great, and I had fun “tweaking” (read: Butchering) a handful of them, for the sake of tinkering with how the developer builds can be altered to your whims.

If I could place a mantra that Super Mario Maker clearly adheres to, it would be, “No barriers. No limits.” You could know absolutely nothing about how to work the Wii U, and even then, Super Mario Maker will be clear as day to you. If you live and breathe Mario, and you’ve been eager to quickly and easily design your own Mario levels for years, Super Mario Maker seems to be the game of your dreams. Better still is, not only is the game extremely accessible and easy to use, but it also rewards your creativity, and doesn’t aim to restrict you in any fashion. If you have an idea that fits into the Mario style in any way, chances are, you can pull it off in Super Mario Maker, a game that doesn’t seem to have as steep a learning curve as other creation-fuelled experiences like Minecraft, and yet, still feels like it’s only limited by your own imagination. 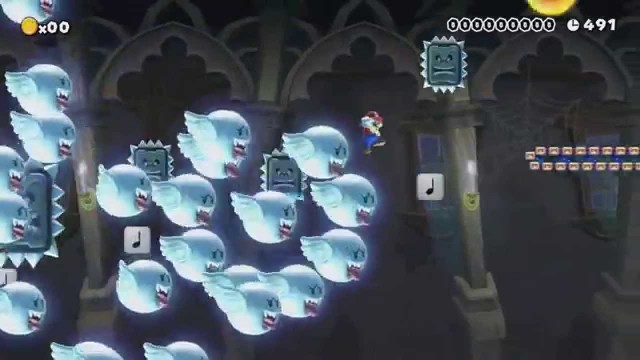 Whether you aim to create stages, play a limitless supply of Mario stages both directly from the developers and from online users, or do a bit of both, Super Mario Maker looks like it’s shaping up to be one of the most engrossing and fun Wii U games of the year. We couldn’t have asked for a more enjoyable and rewarding way to observe such a large milestone for one of gaming’s biggest icons!